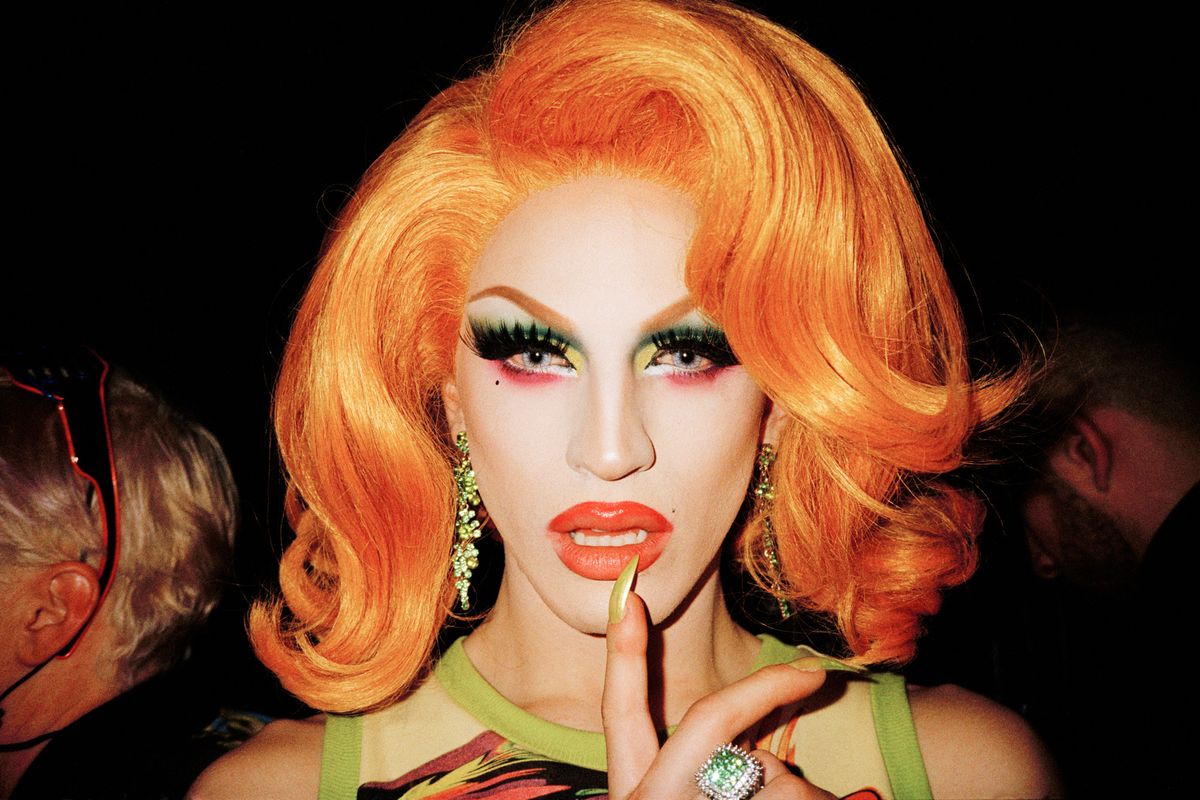 The last we saw of New York-based Czech photographer and artist Marie Tomanova, she was giving us a hopeful glimpse of what America looks like at its best and brightest.

This idealistic vision was captured through eyes of American youth in Tomanova's solo show last summer, aptly called "Young American." Taking it a step further is Tomanova's debut book, a full-color, 144-page monograph of the same name. Throughout its pages are beautiful slice-of-life photographs of edgy New York movers and shakers, including the likes of Aquaria, Alton Mason, Torraine Futurum, Gia Kuan and more, plus a range of gender variance and creative expressions.

This all comes from Tomanova's own experiences trying to find her place as an immigrant in America's complex social landscape, and the freedom she felt upon making meaningful connections. One of those connections Tomanova made was with renowned photographer Ryan McGinley, who recently released his own zeitgeist-capturing ode to New York in his latest book, Mirror Mirror. McGinley wrote the intro to Tomanova's Young American, noting that its groundbreaking diversity is its hallmark, a hopeful vision of what America wants to be, and someday could be — for all.

"This is a future free of gender binaries and stale old definitions of beauty," McGinley writes. "In Marie's world, people can just simply be. I wish all of America's youth culture looked like Marie's photos of Downtown, diverse and inclusive."

If you're in Los Angeles on April 12, Tomanova will present the book at Dover Street Market during the city's Art Book Fair, and her publisher, Paradigm Publishing will host a talk moderated by Theo Constantinou. Additionally Tomanova will have solo shows for Young American in Europe: she'll present her work on April 25 at Academia Film Olomouc, an international film festival in her native Czech Republic, and at New York Calling: A Mini Retrospective opening in Berlin at EEP Gallery on April 26. Tomanova's friend, Marie Dvořákova, who won the student Oscar last year, is making a documentary about her and the Young American project as well, slated to be released next year.

But for now, see 28 young Americans captured by Marie Tomanova, below (buy the book here), and learn more about her scouting process, her friendship with Ryan McGinley, and how she defines her American Dream.

This book celebrates all positive facets of diverse American identity. As an immigrant, what is something you hoped to capture about America in this book?

When I started this project, I don't know if I was necessarily trying to capture "America." It was more driven by the urge to find my own place in the American social landscape, to be with others, to make friends, to have meaningful connections. As I shot this project, it became clear to me that it was about more than my place in the landscape, but that it reflected an idea for me of what America is or should be. And this became a very powerful aspect, particularly when the politics started to really get crazy. As an immigrant, there were periods of time when I felt really scared and at the same time I was shooting these young kids who were so inspiring. They are what America is for me. For me, these portraits are really a portrait of America, and they assert the strength and visibility of this America.

"For me, these portraits are really a portrait of America, and they assert the strength and visibility of this America."

What does the American Dream mean to you?

Marie Tomanova: I went through a very emotional and self-reflecting experience few months ago, during Christmas. I went home, to Czech Republic, after 8 years of not being able to visit my home and family for various immigration reasons. It was pretty moving and complex experience, not only in terms of seeing how my small town changed or not changed, but also to realize how much I changed by making the decision to leave more than 8 years ago.

I spent my first year in US as an au pair in North Carolina. I loved everything about it, the huge highways, big American coffee, the weather, the freedom I gained by being so far from home and the anonymity of being someplace where nobody knows you. It was amazing and it was during that time that I came across Ryan's photographs on the Internet and fell in love. I have been looking up to him ever since and he was one of the motivations why I decided to move to NYC for my second year as an au pair. I hoped that I would once meet him and be photographed by him. At that time, I would never imagine that I will do photography myself, that I will have shows in NYC or that Ryan will come to see my exhibition! It was so beyond everything that I would even imagine to dream of.

And it all happened, which I am really thankful for. I met Ryan at the opening of his exhibition Mirror, Mirror last summer and asked him if he would come to see my show "Young American" that was at that time on view at Czech Center New York. And he actually came to see it and it was such a precious moment — he is one of the most generous and pure people I have ever met. We talked and talked and it was like a dream. It was a major feeling of validation for me. In a way, that moment was my American Dream. And it happened. A few months after that, he also photographed me and wrote the introduction for my book.

It's been pretty crazy coming back home to Czech and realize how person could be limited by their own perception of what one is capable of. And it feels extremely liberating to realize that dreams do come true and it could be even bigger than you dare to dream of. I am very thankful that there are people like Ryan, who inspire generations and also actively support young artists. It was a huge dream come true for me.

"At its core all of these people [in Young American] are really and powerfully just being themselves."

In finding subjects to shoot, what was the most fun part of doing so? The most challenging?

The way I chose people [that I want to photograph] is very intuitive. I love going to openings, gatherings and downtown fashion events. It is always more fun for me with a camera in my hand and it's a great tool how to connect with strangers.

My favorite event of the season is always my friend's Menyelek's fashion show. I first met Menyelek in early 2018 as he casted me to walk his show in Harlem. I brought my Yashica with me and took so many pictures backstage and also of the crowd there. It is always such a vibrant energetic crowd of people, the atmosphere and energy feels very immediate and I feel like I belong. Lots of people in the book were photographed at Menyelek's show and I will be showing bunch of new portraits shot at Menyelek 2019 in the "Young American" show in Berlin at the end of this month. The challenging part of finding subjects to shoot is actually to have the time for the photoshoot. It has been bit crazy lately and I didn't have much time for actual shoots. But that is all great stuff I guess. I plan on shooting heavily in May, so...

The most challenging part of finding people to shoot is when I go up to a complete stranger and ask them to shoot. I used to be such a shy kid. It has taken a lot for me to not only go up to people and talk to them but to also do talks and panels and things. If you could only imagine how scared I was to ask Ryan to come to my show…But I want to say that it is so important to get over my fears. In a way, connecting with people has helped me be myself so much more, or feel comfortable with myself, which I think is also what Young American is about. At its core all of these people [in Young American] are really and powerfully just being themselves. And I think this is an important message and one that I know I have struggled with, to just be okay with being myself, not what others want or think I should be. That is what is so inspirational to me about the people who shoot with me, they show me who they are. They are courageous.