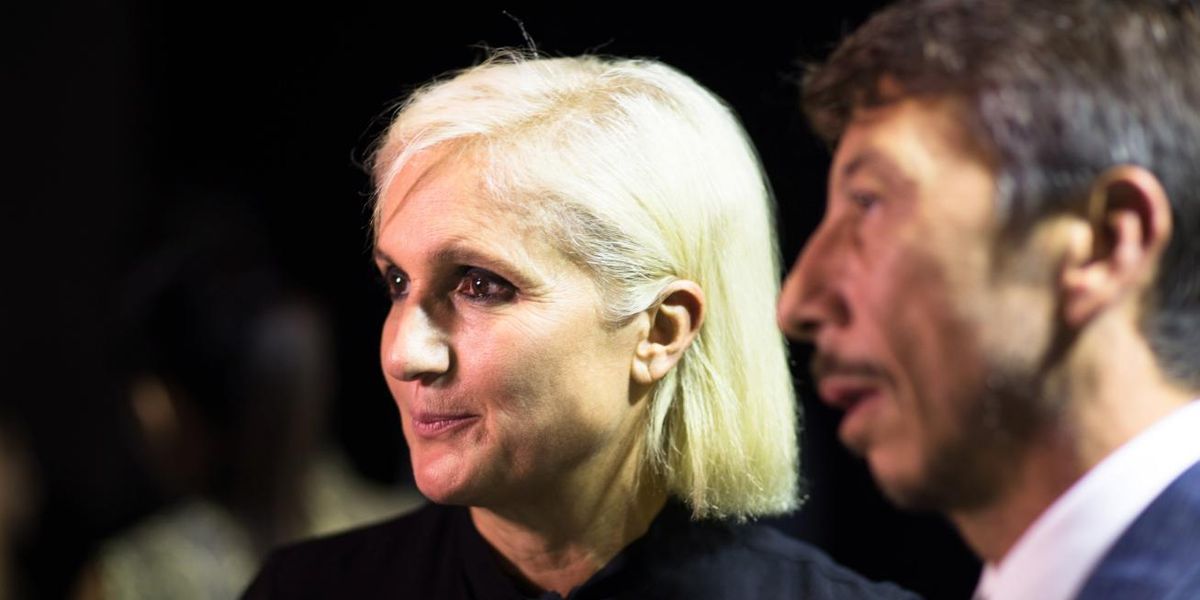 In somewhat unexpected news, reports leaked earlier this morning that Dior would announce its appointment of Maria Grazia Chiuiri, currently half of the design team at Valentino along with Pierpaolo Piccioli, as Creative Director after the couture collections in Paris this July. Chiuri would be the first woman to officially lead Dior in its history—not counting Lucie Meier who is currently co-designing with Serge Ruffieux as part of an interim creative team since Raf Simons' departure last fall.

Chiuri, who has spent most of her career alongside Piccioli, comes with an impressive, if decidedly Italian, CV. After 10 years at Fendi, where she and Paccioli developed the legendary, SATC-annointed Fendi baguette, they moved to Valentino, first as head of accessories then as Creative Directors, which they have held since 2008. Their steady success at Valentino has been held as an industry standard of how to channel the essence of a still living founder while appealing to a younger, more global customer. They favor an earnest almost prim beauty, never short on lace and floral prints, which anymore is a quiet riposte to the irony and grit of their peers like Prada or Saint Laurent. Also, in their second accessories coup in as many decades, they are responsibility for the rockstud heel and bag ubiquity which have been knocked off since they hit the runway five years ago.

The appointment would also signal a shift back, if Chiuiri sticks to her proven aesthetic, to a more sincere and considered femininity for the house. If Raf Simons' collections were hailed by critics and fans for their cerebral and art-tinged brilliance—a welcome break to be sure from his predecessor's flights of fancy and runway theatre—then Chiuiri would feel like a redirect towards Mr. Dior's original ladylike restraint. Also, her accessories prowess would indicate a push towards bag and shoe development, something that eluded Simons and even Galliano in the later seasons.

Other names considered for arguably the most esteemed design position in fashion were J.W. Anderson, whose success at LVMH-owned Loewe is generally seen as a tryout for an appointment at a larger brands in Bernard Arnault's stable eventually, as well as Nicolas Ghesquiere, currently head of Louis Vuitton, and Jack McCullough and Lazaro Hernandez of Proenza Schouler, to name a few. The Dior news comes after the appointment of Bouchra Jarrar at Lanvin as well as Anthony Vacarello at Saint Laurent. It is believed that Chiuri's first collection for Dior will be as soon as the Spring 2017 ready-to-wear collections this October. It also believe that Pierpaolo Piccioili will be named sole Creative Director at Valentino, which is owned by middle eastern buyout firm Mayhoola and announced its purchase of French brand Balmain just yesterday.

A woman in full charge of Maison Dior is perhaps more radical than it may seem, especially at the present moment. Make no mistake, Paris has had no lack of brilliant female designers in the last century: Chanel, Schiaparelli, Lanvin, Grès ,Vionnet, etc.. But in the last few decades they have been elbowed out by the drama, and occasional bluster, of a Paris mens' club of Slimanes, Lagerfelds, and Gallianos. Dior operates and influences on a scale in fashion that very few female designers occupy—Miuccia Prada, Donatella Versace and perhaps Rei Kawakubo the notable exceptions—but there is no equal working in Paris at the moment, still the undisputed heartbeat of fashion. It will be thrilling, and a nice break from whiplash designer turnover, to see what Chiuri does at the helm. In perhaps tertiary coincidence, Rome, the city from which Chiuri has designed Valentino, just elected its first female mayor, Virginia Raggi.