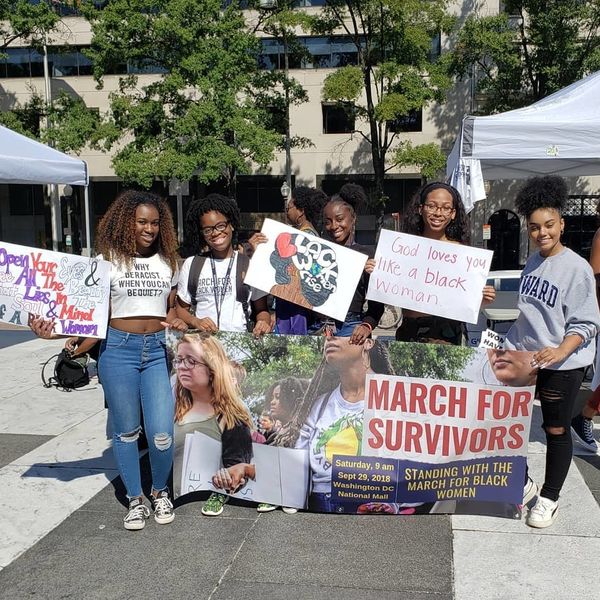 People Gather in D.C. to #MarchForBlackWomen

This weekend, the Black Women's Blueprint—an organization that works to empower black women and girls—has organized a march for black women's rights. All people from different backgrounds and identities gathered in Washington, D.C. for the first of the two-day event, which began at the National Mall on Saturday, September 29.

"Black women, cis, trans, and diverse identities, allies and comrades will unite and lock arms, marching unapologetically with all others who want to pull the foot of oppression off our necks and foreground the notion a new social contract is needed for all Black women," a press release for the march reads. "A new social contract that overturn to the dominant political narratives of the past, and courageous enough in the present to pass along to our future generations."

The Black Women's Blueprint has also made their demands clear. CBS affiliate news source KVAL says that they want:

- Full reauthorization of the Violence Against Women Act set to expire on September 30, 2018.

- Remove the gag order on advocacy and prevention focused agencies forbidding the use of the words: transgender, fetus, vulnerable, science-based, evidence-based, diversity, and entitlement.

The group behind the Women's March has also expressed their support for the #MarchForBlackWomen in a tweet, saying, "Black women have always been at the forefront of our movements - from women's rights to racial and economic justice to immigrant rights and so much more. #FollowBlackWomen #M4BW #MarchForBlackWomen"

Black women have always been at the forefront of our movements - from women’s rights to racial and economic justice to immigrant rights and so much more. #FollowBlackWomen #M4BW #MarchForBlackWomen

The march on Sunday, this time in New York City, officially begins at 3:00 PM at City Hall Park, at the intersection of Broadway and Barclay Street. The rally will also hold a vigil that will go on until midnight, so if you plan on attending the organizers that you bring white candles.

However, for those who can't join either of the events, the Women's March official Twitter account has also outlined three different ways you can still contribute to the movement:

Unable to join #MarchForBlackWomen? You can still show your support!