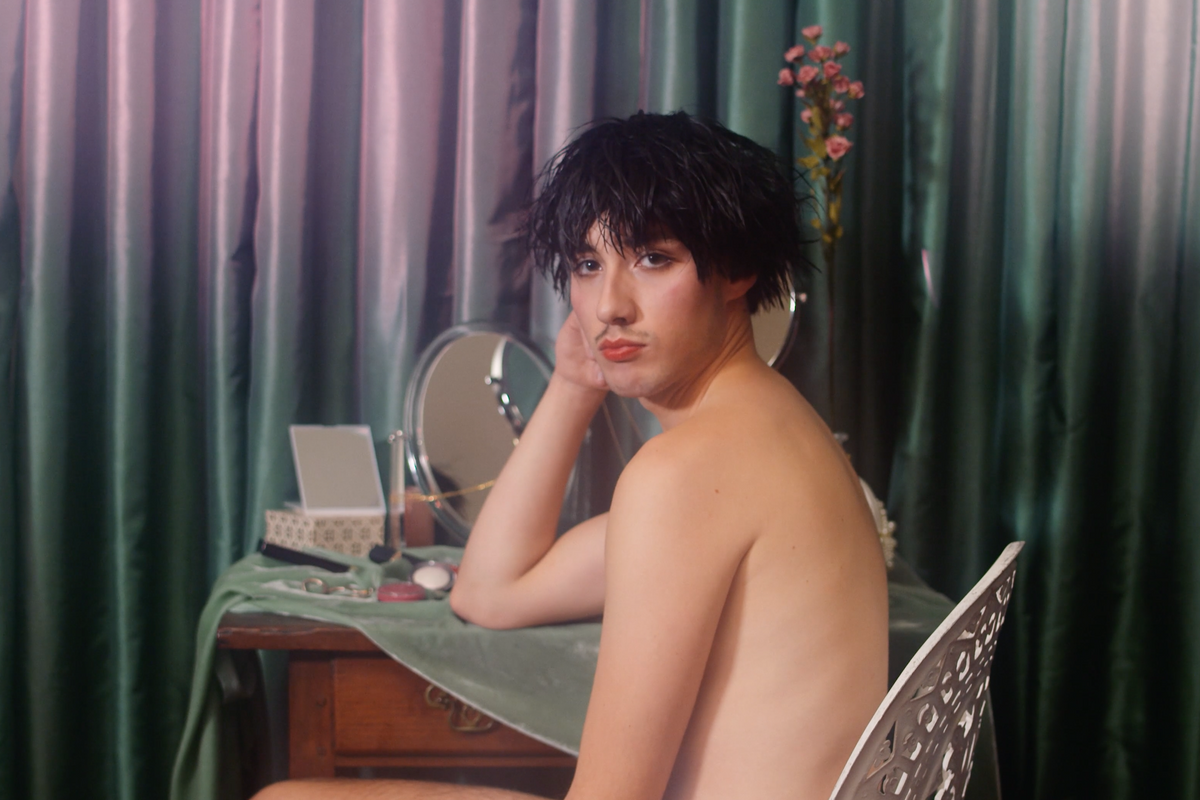 Marcelo Gutierrez Is a Delusional Dreamer in New Short Film

Brooklyn-based multidisciplinary artist Marcelo Gutierrez has unveiled another act in his perennial creative poignance: Hiraeth, a short film built around "imagined memories for a desired life." Its lovely yet peculiar protagonist is played by Gutierrez himself — wholly steeped in wistful romanticism, and enveloped in pearly tones of satin pinks and soft golds.

While deeply submerged in fashion as runway and editorial makeup artist, the Bogotá-born, rising luminary is increasingly prolific as a filmmaker, too; Hiraeth is the latest of several works released in just a few short years.

PAPER caught up with Gutierrez to learn more about the project, and where romance and nostalgia intersect within it.

Can you tell us about the idea behind this film? How did this character develop?

I've always been a big fan of biographies and biopics — a fan of how writing and cinema managed to make an individual's life into something more fantastical in detail. Although the purpose of a biography is to re-tell the story of someone else's life, it's only a matter of time before a sense of cinematic drama and art come into play because there is no way of exactly reliving someone else's story. I'm a strong believer in manifesting things, and that you are the the only writer to the story you want to tell — you are responsible for leaving behind the narrative you want others to read, or in this case, watch. Anything is possible if you believe it so. The character is an amalgamation of my personal beliefs in willpower and my love of delusion. This film really is a prelude to a much larger body of work coming in the future that will continue to explore this idea of rewriting one's own biography — the power of exercising reinvention and imagination for a desired life.

Why Hiraeth? It's a Welsh word, right?

Hiraeth is a Welsh word meaning a homesickness for a home to which you cannot return, a home which maybe never was — the nostalgia, the yearning the grief for the lost places of your past. I discovered this term later into the project, but I was having a hard time coming up with a title for it. Once I did, it made perfect sense. I've felt this feeling so many times. I relate, and many of us do, to this feeling of longing for something you thought was — but was not. A romantic combination of delusion and nostalgia. A kind of delusion that can sometimes involve you imagining memories in your past that perhaps never were — or never were they way you retold them.

I saw this was filmed in 2016; was editing done more recently? Along the way in its production, to your ideas about what you wanted to convey change or evolve?

Correct, I shot this film with Bailey Hikawa and Pablo Tapia-Pla in 2016 while I was working almost full-time as aan au pair to a very wealthy older lady in Chelsea. I was an au pair to her two French Bulldogs... another story for another movie. Bailey flew in from LA and we secretly shot the film in a whole day in the lady's living room while she was on vacation with her two dogs. Editing and most of the dialogue happened actually in the last few months leading up to 2018. I had gone through a really bad breakup right after we shot this film and also had run away from this au pair job (aka maid), so it took me about two years to get myself back in a healthy place mentally. Over the course of this break the message for the film never changed, but the writing did and it came from a much more heartfelt and honest [place]. I'm happy I took a break from it, it's important for me not to rush anything that comes from my soul.

What made you choose the two past lives the protagonist claims—a sorcerer serving the royal family in Ancient Egypt, then a teen or early 20s boy in France or Spain during the 1800s, who went from kitchen boy to the secret lover of influential men? What do these memories, whether real or invented, tell us about the character?

The two past lives honestly came from a combination of personal experience and my imaginative writing. Which is what this film really is about. When I was younger, throughout elementary school I was absolutely in love with ancient Egyptian mythology and the day-to-day lives of the people. I would research meals to prepare based on theirs and outfits to make based on theirs. Of course my infatuation was only exaggerated through the Hollywood studios' extravagant depictions of ancient Egyptian royalty. I could never explain why I was so obsessed, so I blame it on a past life. Similar to that, is the story of the forbidden lover to the influential. Part honest experience and part dramatization. What they both share is an outsider in the inside quality — someone who by talent and nerve found themselves out of a dire reality and in the middle of something more than what they could have imagined. I relate to this closeness to greatness quality — but also this feeling of remaining an outsider to the club.

What about the recipients of the character's letters?

The letters are symbolic and literal at the same time. The writing and interaction with memories that potentially never were or were too real. Letters come with a level of distance and romance. A breath and space that leaves room daydreaming and reinvention. This character engages with other indivuals to whom they connect with through the heart and soul but also through moments that they hope were as real to them as they were to others. Hiraeth.

Your film before this, Tender Roses for Tough Climates, related ideas and experiences of romances; this film feels especially romantic, too. Are you still exploring that theme here?

That film was definitely centered around romance, but a kind that is much more concrete, real and present. Hiraeth is romantic in sentiment because it dances with delusion, nostalgia and storytelling. It's not a film about love but more about the love you maybe never had or missed. The memories you did not love and are rewriting to love again.