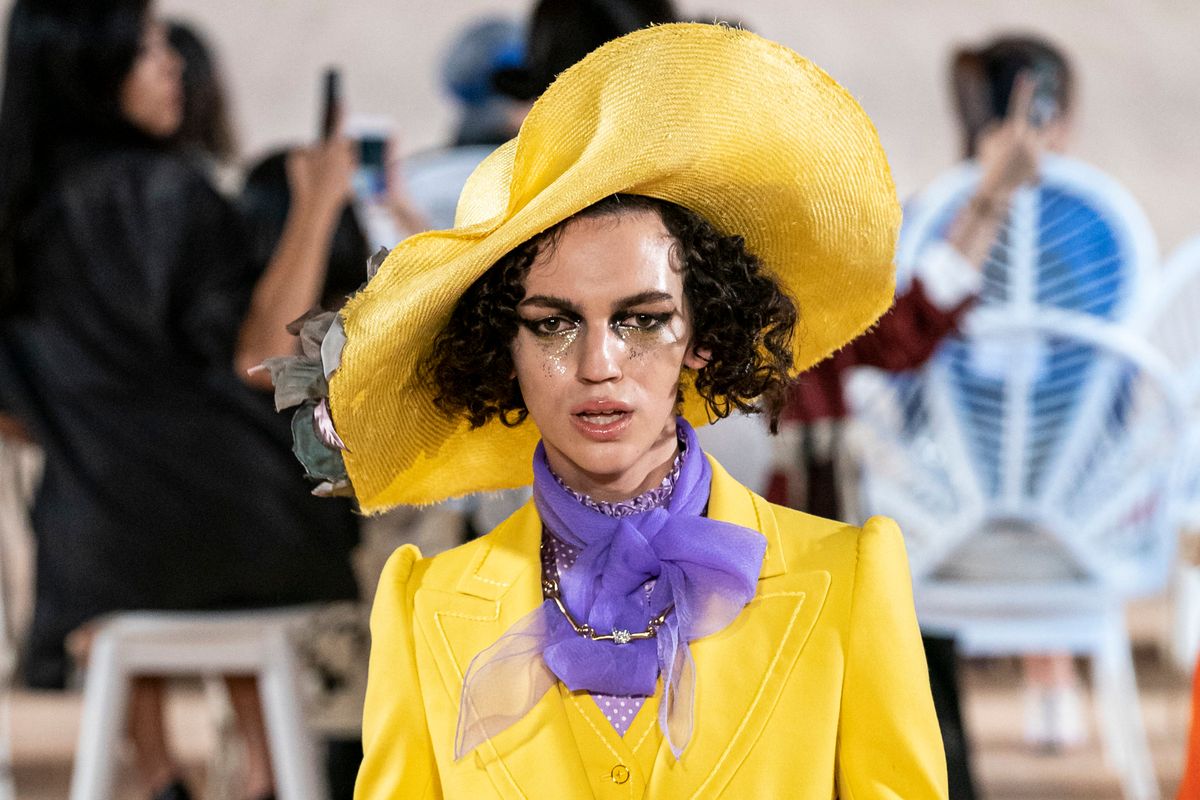 "It's kind of a nod to the real world," makeup artist — and legendary beauty mogul — Pat McGrath said backstage at Marc Jacobs Spring 2020. "For Marc and I, it's an idealized interpretation of real life. There's definitely a nod to the past and future."

Marc Jacobs' presentation, which marked the end of NYFW this season, started on a nostalgic note. Held on the 18th anniversary of 9/11, the show reminisced some of the most significant icons and events from the past.

A crew of mesmerizing characters played by models brought everything to life in a gamut of knit dresses, patterned suits, pieces with carefully embroidered appliqués and sequins, and some very bright colors.

"There's an amazing cast of characters in the show — some extravagant, some natural," McGrath said. "Everybody now loves to play with makeup. Some people are truly eccentric, and some people love the art of true natural makeup. Once you see the clothes, you'll see real characters that come to life."

Digging deeper into themes of nostalgia and icons, McGrath brewed up dozens of different looks working mostly with exaggerated lashes, loose glitter, and eyes bedazzled with rhinestones and gold leaf. She also included some interesting warm-toned eyeshadows and highlights, along with a distinct antique pistachio shade painted over the lids.

The idea all along was to reexamine the past and the future through a modern lens. "When you think about a lot of makeup, you always think that's quite old-fashioned.," she said. "What's great is taking looks that come from the past, but modernizing them. So, that was another great quest we all went on as a team. In a way, I would call it a modern take on street style. It's street style in the most maximal way. It's been really a lot of fun for myself and the team to be able to express ourselves in all of these different ways. No one girl, or boy, or person, could look the same. Every single one had to be different. That was quite an exercise, as you can imagine."

Hairstylist Guido Palau followed a complementing trajectory fashioning 61 different hairstyles, each inspired by icons of the past. There was one that resembled Marilyn Monroe, another that reminded one of Jane Fonda, and even one inspired by Shelly Duval.

"We bought into their energy. That's why we love them. They're iconic," Palau gushed backstage. "We're always talking about an ultimate in something. But the ultimate is individuality, in expression of who you are, and that can be anything. There's a resurgence of '80s, yes, but then do it in your way. That's what makes you. Everything goes."

There were loose, but blown up waves chopped up to the ear, classic air stewardess bobs with a side fringe, messy pixies topped with colorful hats. The overriding message amidst these array of creations, however, remained the same: inclusivity.

"The takeaway is for real women," Palau said. "Normally women are always looking for advice: 'Is it right? Is it okay?' But there are no rules about what is right. It's right if you're comfortable, That's such an old idea of beauty and it's one that is totally vanishing. When we look at icon, we presume that they are secure. But we don't know if Marilyn Monroe wasn't. And that's why we idolize them in lots of ways. We idolize their beauty, but who knows how they really were."