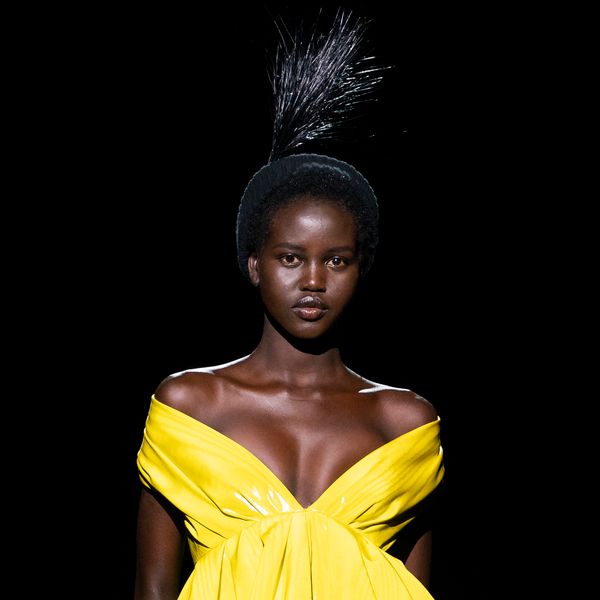 As the clock struck 6:00 PM exactly, the first of two extremely intimate back-to-back Marc Jacobs shows began at the Park Avenue Armory. To many, it was one of the most cinematic moments of NYFW. Out of total total darkness, models emerged and were guided in and out of a brief spotlight. Meanwhile, a theatrical live band with violinists played in the background. Here's everything you need to know about the show.

Related | Nowstalgia: Marc Jacobs' Grunge Collection That Got Him Fired

For the past few seasons, Jacobs has been playing with volume. Big shapes — the kind that command space within a room — recalled the silhouettes of the vibrant '80s as well as work by designer Claude Montana. Nearly all the gowns in the collection were floor-length and the ones that weren't were heavily tiered and saturated in volume, wedding cake style.

Almost every single model's head was topped with a Stephen Jones millinery creation. Slim cut beanies were a striking contrast to the glamorous outfits (and a welcome reference to Jacobs' iconic grunge collection done 25 years ago for Perry Ellis, which he recently rereleased in the form of a capsule collection). Some of the knitted hats matched the clothing and most of them were covered in feathers.

The most stunning pieces of the collection were the feathered frocks, coats and more. Christy Turlington (who also walked in the designer's aforementioned grunge collection) closed the show wearing a structured gown covered in almost metallic black feathers. A mini version of the same dress also came in cornflower blue, and a sequin cape with feathers was a textural dream.

Where Jacobs really experimented in volume most successful was the coats. Animal spots, stripes, Prince of Wale checks and solid shades of navy blue and sea foam green distorted the models' silhouettes in the best possible way.

With under 200 seats, the fall 2019 collection felt like an intimate celebration of industry supporters. Designer Anna Sui was front row along with Sofia Coppola and Tracee Ellis Ross.