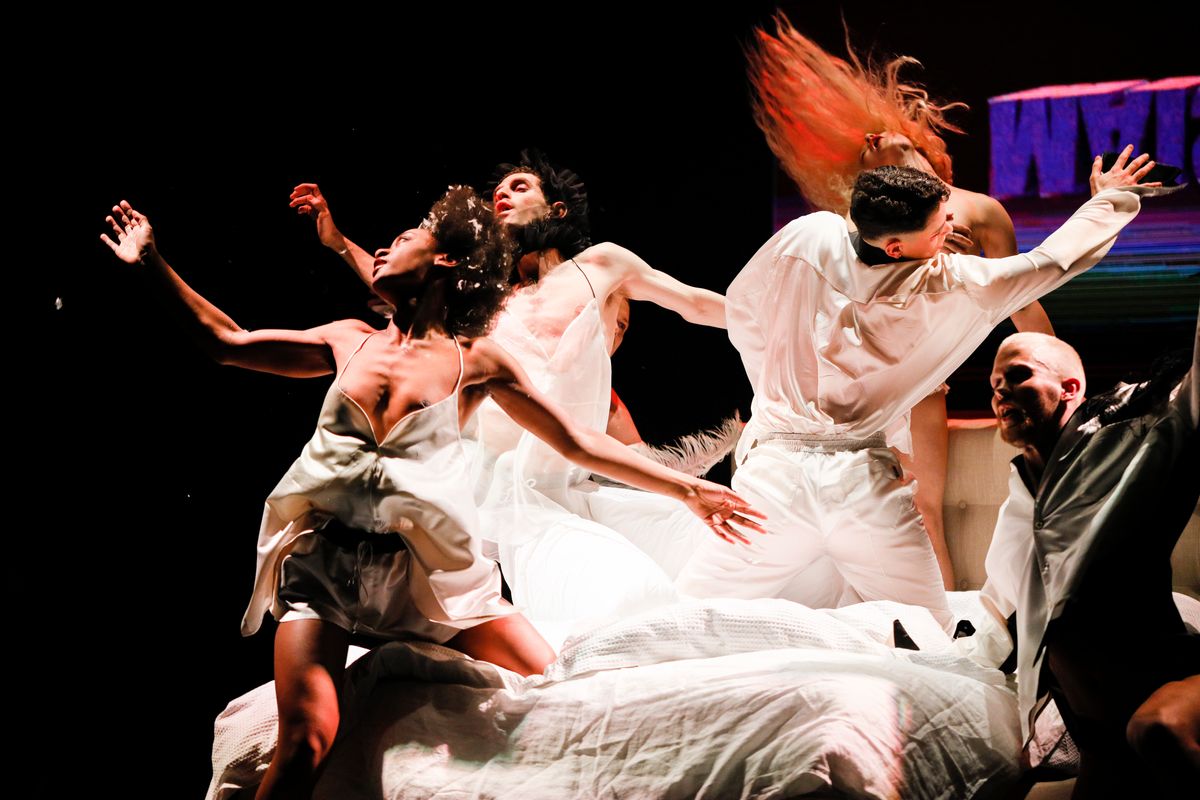 Maison the Faux's runway show at Amsterdam Fashion Week finished much differently than it began.

As guests were seated, two beds centered the space, each encased with sheer panels printed like embossed Victorian walls. Inside one, a pair of performers sensually moved together, exchanging weight while dressed in silky sleepwear; in the other, a lone model writhed around, slowly contorting her body. Massive shipping boxes filled the room, holding crisp white comforters and plush pillows, and labeled with "Maison the Faux Melatonin Supplement Facts." (Ingredients range from drowsiness to love).

This was the Dutch brand's homecoming (they've recently been showing in the U.S.), and the symbolism was explicit. But this was where straightforward allusions to home — the privacy, the intimacy, the serenity, the comfort — transitioned into more nuanced, dizzying interpretations.

"With Maison the Faux, we talk a lot about the importance of self-expression," designer duo Joris Suk and Tessa de Boer said, "and how important it is to question yourself in order to stay true to yourself. We wanted to talk about the concept of 'home' for various reasons: It was a homecoming back to Amsterdam, but we also wanted to use the symbolism of a home to visualize our thoughts on freedom and personal growth."

A soundtrack of moving trucks and metallic machinery disrupted the initial silence, and Maison the Faux's theatrical production rolled out as three distinct scenes while models surrounded the action wearing genderless, "bedroom-chic" looks.

"Scene One was about how a person can let themselves go, and find release when they're alone at home," the designers said. Panels lifted from around the solo woman's bed, as she started moving aggressively — twisting her limbs, obsessively rubbing her body, and tossing around pillows — while feathers poured from the ceiling and red lights flashed. It was chaotic and devilish, like watching the build-up to an exorcism. Men dressed in coveralls soon emerged to physically remove her, and then started clearing out all the shipping boxes.

"Scene Two was about cleansing yourself and the space around you to feel at home," they continued. The scent of incense poured in, as a violinist walked to center stage. "You were silk and you drew it; you were frozen veins, uncuttable." she spoke clearly into a mic, before softly singing: "A Maison is made of hopes and dreams." Two models flanked her — carrying sage and balancing a tall, lit candle on their heads — and her soft song developed into a boisterous cover of The Wizard of Oz's "Somewhere Over the Rainbow."

"Scene Three was about how you can be the most intimate and get crazy with the people you like the most," Joris and Tessa concluded. The working crew returned to remove any remaining cardboard boxes and an urgent, tropical drumbeat exploded. Panels surrounding the second bed quickly pulled toward the ceiling, and the models inside began thrashing to the track. More and more joined them, collectively flailing their arms and pulsing in unison until an acapella duet calmed the fury. Rather than a finale with showstopping looks, models circled the catwalk fully naked, some clutching comforters and others covering their crotch with a pillow — ass out.

"Overall, we wanted to change the tension of the show from a feeling of chaos and fullness to a serene stillness," the designers said. "So that's why we literally moved all of the set during the show, and stripped down the collection, music and performance over the course of the show."

Maison the Faux's brand has been built on ideas of designing humanwear — a term they use to reject any binary enforced by mainstream powers in the fashion industry. This collection was no different, with models of many different types all sharing silhouettes regardless of their gender, body type or age.

Echoing ideas of home, this season introduced more easy, relaxed silhouettes than ever before in natural hues like creme and white. But it was all still very sexy and strange. There were sheer, ruffled robes with matching bonnets, long silky nightgowns with thigh-high slits, neckpieces that looked like big pillows and plenty of skimpy, flirtatious nighties. "The collection was our interpretation of archetypal home and bedroom wear," Joris and Tessa said. "In every piece you can see something of a traditional pajama, morning robe or neglige." Several models were rolled onto the runway, strapped to a literal mattress and encased within a sheet of clear plastic. One wore a comforter over their head with a peephole, and carried a crystal.

So how does AFW's homecoming feel for two designers with such an avant-garde approach in a city that still largely favors commercial work? "I guess we are outsiders and insiders at the same time," the designers reckon. "Because we move around a lot with our work. For us, Amsterdam is very special since this is where Maison the Faux showed for the very first time, and it's always been really beautiful to come back to it."

Photos courtesy of Maison the Faux