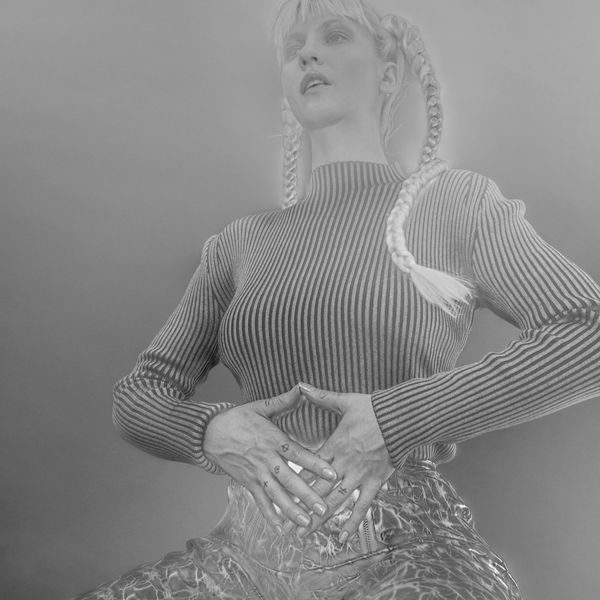 Magic Island Is the Soundtrack to Your Sex Dream-Nightmare

You know that narrow psychological space where a dream becomes a nightmare, then becomes a dream again? Magic Island's new EP, Warm Heaven, just might be the perfect soundtrack to that hazy, turbulent experience. Steeped in references to religious iconography, mixed with sensual beats and soft whispers that turn to screams, the project of Berlin-based Canadian singer Emma Czerny loves to keep you on your toes.

Described as "honest pop" powered at times by "feminine rage," Magic Island's songs sound like fucked-up hymns you might listen to while exacting revenge against an ex-lover, or sleeping with that same ex-lover again despite yourself.

"High Note" is a slow-building anthem of sexual desire and release that reminds us of the raw power in asking for what you want, and not letting anyone shame you for your desire: "I hold a power you'll never have/ Don't disrespect me/ or make me feel bad." Listening to the Warm Heaven EP feels like intercepting secret messages between otherworldly beings in love or lust, giving you the pleasure of decoding them.

Below, see what Magic Island told PAPER about her musical influences, her most meaningful on-stage experience, and what's up next.

How would you describe the Magic Island sound?

Slow love-making with an alien while you're high on ketamine, sounds from the radio in the faint distance. You fall asleep in each others arms thinking you've found the love of your life, but when you wake up they're gone.

Who or what are the biggest influences on your music?

My lovers are always the biggest influences. Interpersonal romantic relationships are so complex, it's a constant journey of trying to show somebody your true soul. So this gives me a lot of inspiration for finding that true voice and communicating messages I wish I could say to someone.

Why do you make music? What's your favorite part about the process?

My favorite part is being alone at night with my Ableton. I'm a social person, so I used to be out all the time but I've realized I am so much more fulfilled when I'm creating something. Producing a song is so exciting, it's like making the pieces of a puzzle and putting them together as you go along. I think particularly with electronic music, the beginning of a production can sound like a total mess, but once you add enough elements and manipulate everything to your desires it is an incredible moment when the mess quickly transitions into something full and finished and powerful.

If you were to create a dream playlist with your EP in it, what music would you pair with yours?

What is the most meaningful experience you've had playing a live show?

Definitely this one time in London at a small DIY venue in Dalston called SET. These two older men came in right when doors opened and I thought, "Do they know what they are here for?" They came right up to me and said they loved my music and that they often listen while they are cooking, having intimate moments together, crying. "Easy Babe" was their favorite. The three of us became friends and we kept in touch via email, writing long letters to each other about life and love and art. One day I received an email from one of the men, explaining that his partner had died. This was one of the most beautiful texts I've ever read — the way he wrote about their past, their connection, and also the ease with which he seemed to accept and absorb death as a concept. He asked me to sing Easy Babe at the funeral, this was a crazy experience and probably one of the most emotional moments on stage I will ever have. So this experience started at a show and became something much, much bigger.

Where did the label "honest pop" come from? If your pop music is "honest," how would you characterize typical pop?

My friend Arthur saw me playing live once and labelled it that, I liked it. I think that typical pop music is known for being so clean and sleek and "perfect," which is not a true reality. This is something I want to embrace, in my music and myself, that I am not perfect and that that is also beautiful and powerful in it own way.

Your melodies are described as having a "desperate feminine rage." Are there ways in which femininity is a distinct part of your musical identity and your music?

Femininity is definitely a big part of my musical identity, I feel like I have the responsibility to be a strong woman. I'm always reminded of this when I play shows and teenage girls come to me looking for advice on how to follow their dreams or be who they want to be. Actually someone recently told me that I am very strong in my femininity and that this is power; which was an important revelation to me as I had always felt kind of boyish or masculine. So I realized there are many ways to be a strong woman, you can still be powerful and confident yet feminine.

What do you want people to feel while listening to your EP?

Each track on the EP has quite a different tone and style aesthetic, so I think different tracks suit for different moments. I would want people to incorporate these tracks into fitting moments of their lives — sex, anger, sadness.

What's next for you after the Warm Heaven EP?

The next album. I will also release a mixtape of the piano variations I originally composed that inspired each track from Warm Heaven EP. I have a big immersive installation where I invite the audience into my idea of a "Warm Heaven" with dancers, installations and cellists at Pop Kultur Festival in Berlin August 21-23 so that will be quite a moment. I would love to do more multi-arts installations like that or theatre work, but I'm also desperate to get the next album together and see where my voice takes me next.

Magic Island's EP, Warm Heaven, is out now on Mansions and Millions.