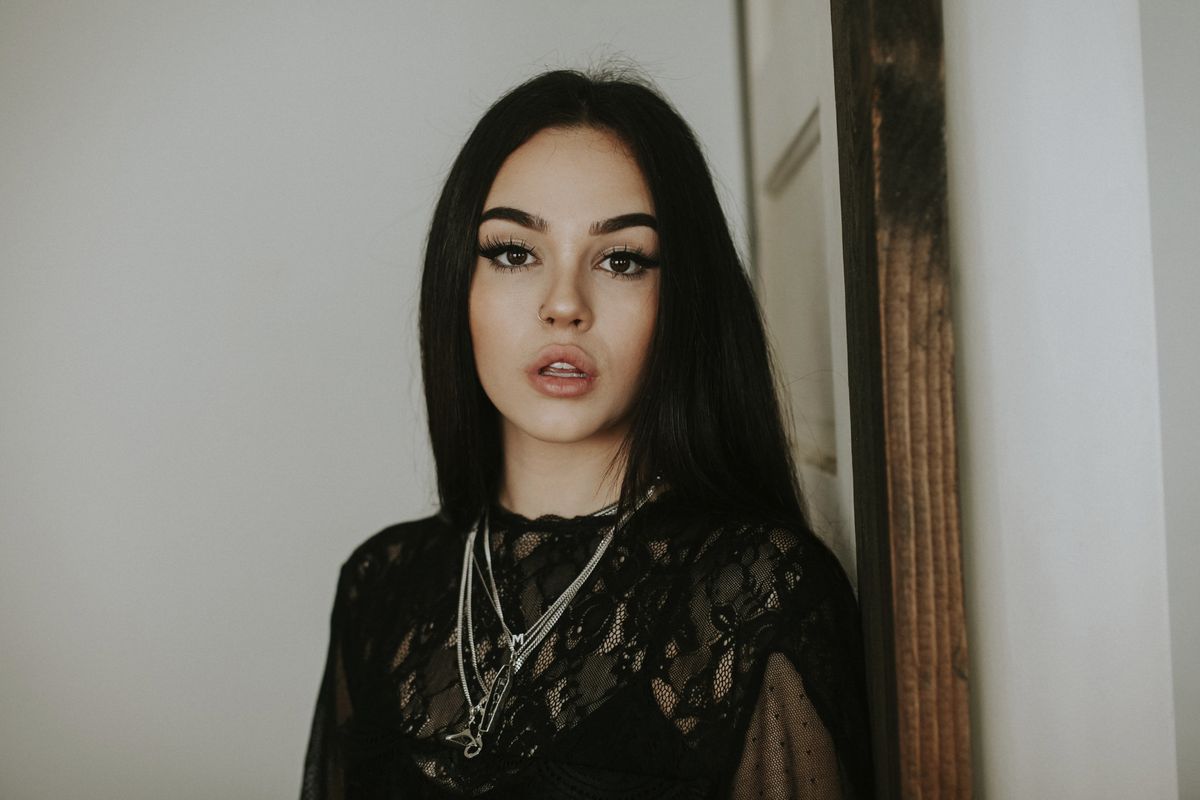 Amidst Success, Maggie Lindemann Asks, 'Would I?'

Maggie Lindemann may have gotten her start on the now-defunct video sharing app Keek, but the singing career she's launched since has known no bounds. Although she leveraged her status as a social media star early on — posting short cover videos and the occasional vlog — her songwriting ventures have become deeply personal in the past couple years. Her 2016 viral hit, "Pretty Girl," launched her to the top of Spotify charts and eventually to the front page of YouTube with its accompanying music video.

Since "Pretty Girl," Lindemann has only hit high notes; in 2017 she went on tour with The Vamps, scored a feature on their single "Personal," and made waves with the release of one of her newest earworms, "Obsessed," though, her most recent release was possibly her most adventurous yet. Earlier this fall, millions of Maggie fans rejoiced at the release of her Halloween bop, "Human."

It seems that Maggie Lindemann can't be stopped, but even she admits that in the midst of all the successes have been bouts of sadness and hurt. Her new single, "Would I," explores these feelings both lyrically and sonically. Lindemann explains this particularly rough period of her life to PAPER in a sincere interview that also previews the bright future to come.

Listen to "Would I," premiering on PAPER, and read the full conversation below:

PAPER: Hi Maggie! How are you?

Maggie: I'm good, how are you?

Thank you! Thank you so much.

It's definitely different, but before we get into it, we need to talk about the little Halloween moment you had with the "Human" video. It was everything! What was filming it like?

It was so cool, the dancers, the contortionist people, the set — everything was so cool, it was such a spooky vibe throughout the whole thing. Even on set there was a big spooky vibe. It was kind of like, my favorite shoot that I've done.

It was a very "American Horror Story," Maggie-is-the-new-Supreme type of situation.

Thank you! I love that. [Laughs]

Totally the vibe for Halloween. The new track, "Would I," draws on some of the similar themes that "Human" did, maybe in a less campy way. Can you talk to me about how you came up with these themes?

I keep thinking about that line, "Everything is never enough." Does singing it, and you being more aware of it, does that help the feeling start to fade for you or do you still feel it linger?

I mean, I think it helps the feeling a lot, but it totally doesn't get rid of that feeling. I still feel like that a lot, and I still feel sad, and all those things, which makes singing it way more real for me. But singing helps so much, and writing it down and being in a room and getting those feelings out, it definitely does help a lot. That's what I hope for for other people, too.

The song alludes to LA being such a heavy weight, a pressure on you. Was that one of the driving factors of that time, the setting you were in?

New York can be toxic too!

I feel like, yeah, anywhere you are can be toxic, it's really just who you surround yourself with and what you do. I think that at this time, when that song was written, so much was going on in LA. I don't even know, it was just a really dark place in LA. People were just being mean and things were just really rough. This happened like, Christmas-time, January. So I went home, and I was just like, finally away from it. I was like, "Damn. LA is so draining, it's just making me this person that I didn't used to be." I don't know, LA is a great place but if you get in it wrong it can really tear you down.

How long have you been waiting to release the song?

Oh my gosh. Literally since, I want to say like, December of last year. So it's been a really long time, and I'm really excited because I was a little nervous, too. We've been talking about releasing it for so long, and it never felt right. I always wanted to release it during this time, like December/November. I get really bad seasonal depression, so it kind of resonates with me the most at this time, so I'm really glad that it ended up coming out around this time. It's more real for me.

I think I might have seen on Instagram a little hint that you've already filmed the video. Can we get any clues on what it's like?

Do you have a particular director that you like to work with on these videos, or a visionary? Or do you drive most of the visuals?

I get with the director and I give all my ideas. I say the direction I want and certain things I want. I started working with Kajal, and she's been amazing. That's who did "Human" and that's who has been working with me. I've been giving her my ideas and she's been able to execute them perfect. Like, exactly what I envisioned. So it's been sick, because sometimes I can have a hard time getting what I want out there. It's like, I know what I want, but just putting it together... she's been great.

Having those collaborators is really good. Do you have any people you've been wanting to collaborate with, any other artists — visual, musical, or otherwise?

I don't know. I really want to collab with a really cool DJ or something. I've always said that. I really love SOPHIE and I love Mura Masa. Stuff like that is so sick to me, something like that would just be so sick.

Related | Did You Know SOPHIE Produced These 10 Iconic Songs?

Yeah, these electronic producers. Their production behind a voice like yours is an insane, universes-collide kind of thing.

It creates such a cool product. I have a question I'm sure you've been getting — your debut album. Is it still coming together? How are you feeling about the process?

The process, I mean, it's been great. I think that we're just pretty much putting the finishing touches on it. It's getting there, it's really close. I'm really, really excited about it. It's been a long process just because I'm so picky and I want everything to be perfect and match. I've been really picky on it, but I think it's finally there.

Do you know if you're going to include "Human" and "Would I" on it yet?