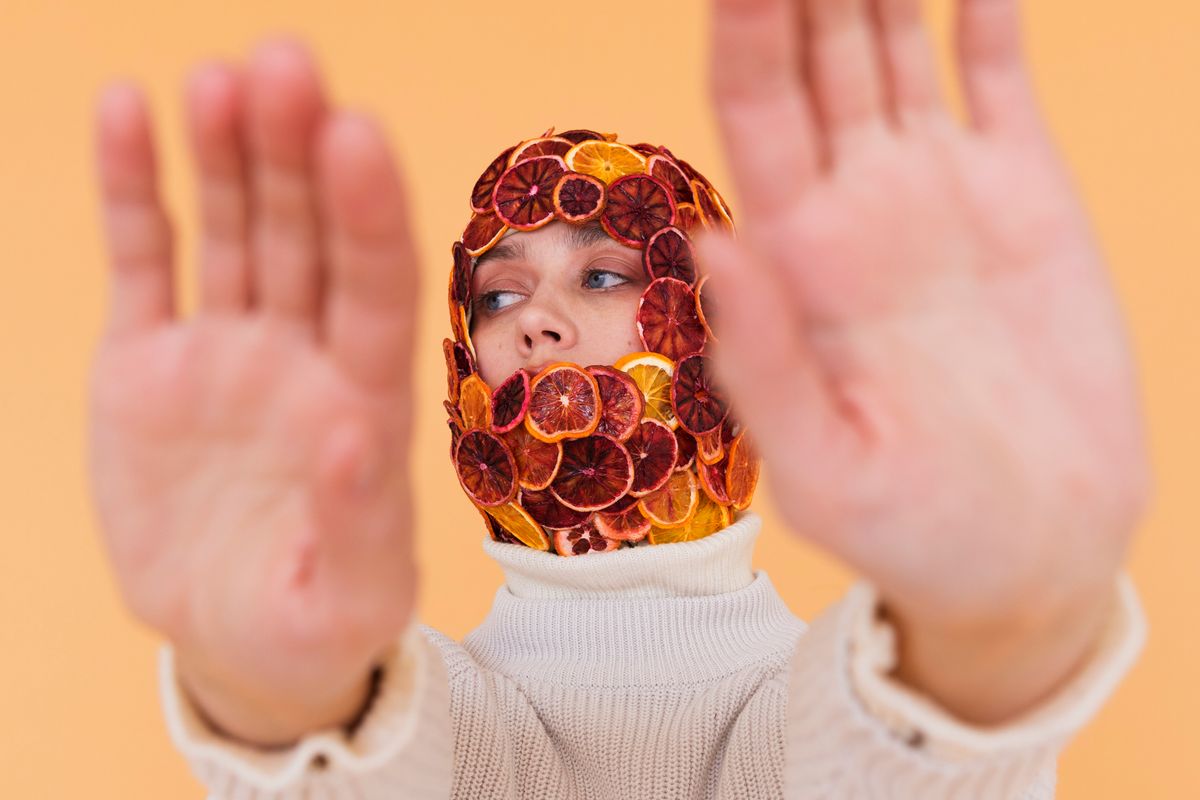 At first glance, it would be easy to mistake Madge (real name Cat Leavy) for just another head-shaven, trendy club muse multi-hyphenate with an Instagram full of freaky photoshoots and a Soundcloud side project. She practices occult and Tarot, is inspired by Celtic folklore, has features in Hunger and i-D, collaborates with non-binary clothing label Official Rebrand, walked at NYFW for Suzanne Rae and she's dropping an EP of '00s pop punk and indie covers. Her resume is a survey of the Internet in 2019.

But Madge's freakiness is anything but the product of a formula, and she's no one's muse but her own. She embraced feminism and playful uses of femininity after rebelling against the strict gender roles of the Mormon, small-town Utah community she grew up in. She reckoned with her religious beliefs while studying performance art at NYU. She's had to repair her relationships with the instruments she was classically trained to play during her childhood, when she wasn't allowed to listen to pop music. She began to find the zeitgeisty brand she occupies now in Freiburg, Germany after college, where she joined synth-pop duo New Shack. Now, she lives in LA, models, babysits and makes confrontational, girlishly saccharine and deliciously weird bedroom pop about her feelings.

It turns out, the musical manifestation of these singular experiences sounds a bit like if Grimes and Frankie Cosmos all did adderall together, and Robyn popped in for a line. On her debut solo EP Fight or Flight Club, she combines sparkly, squishy, maximalist pop production (which she does herself, since losing interest in interacting with condescending male producers) and deliberately childish, ethereal vocals. Her aggressive, blunt lyrics are often absurd and oblique. But if you pay attention, her stories are full of sharp-edged reflections on gender, trauma, pleasure and pain.

Madge's upcoming EP titled Just A Girl tells her story in a different way. A collection of five covers, the tracklist (Sum 41, Death Cab For Cutie, Weezer, No Doubt, Coheed and Cambria) is so on-the-nose it seems like it must have been curated to hit every bucket of 2019 nostalgia. In reality, the selections represent the random, tiny canon of radio songs Leavy discovered and clung to in a household devoid of pop: "They were almost felt naughty or secretive, something I would listen to on the radio in my bedroom with the lights off."

This summer she shared the first single: a shimmery, intimate take on hooligan pop punks Sum 41's "In Too Deep." Now PAPER premieres the next two singles: Madge's mischievous interventions into No Doubt's tenuous girl power anthem "Just A Girl" and Weezer's mega-hit Beverly Hills." Her feminine, melancholy whisper traded in for Rivers Cuomo's snarl confronts Weezer's obnoxious masculinity. Meanwhile on "Just A Girl" she retains the song's call for autonomy, but reworks it into something tender and personal, distancing it from the clichés that make the original feel dated in 2019. Both are as strange, disarming and authentic as Madge has proved herself to be.

PAPER chatted with Madge about about what these classics — and their fraught legacies — mean to her, our inescapable nostalgia, and life as a DIY artist in LA.

When and why did you start making music?

I've always made music. I started doing competitive classical piano when I was four. I can't remember a time when I wasn't also writing songs and putting words to them. When I was in kindergarten, my mom helped me write one of my songs down and it got printed in a children's music book. I can't remember why I started. It just happened naturally. But later it definitely became an exercise in getting my demons out. I think it's one of my most fundamental forms of expression.

How did Madge as a project come into being? What is "Madge" about for you?

I started making pop music with my band New Shack: something that I still work on and perform with. In many ways Madge was an extension of what I was already doing. It started out as an experiment. I wanted to write, engineer, produce, and mix everything on my own. I was frustrated (and am STILL frustrated) by the lack of women working on the production side. Madge is very much about pushing myself into that world. I still have so far to go.

Are you a full-time musician, or are you living the day job life?

I'm mostly a full-time producer and songwriter, but I also side hustle, as one does in Los Angeles. I've done a little modeling and a little babysitting and a little crying into my pillow at night because it's so hard to freelance this kind of life hahahaha... fml.

Why a covers EP?

I didn't listen to pop music growing up. It was all classical, jazz, and some oldies. So, when there was a pop song that I heard and liked, it really STUCK. It almost felt naughty or secretive, something I would listen to on the radio in my bedroom with the lights off. These covers are songs that STUCK, spanning the years of childhood into early teens. They still influence me.

Covers can be tributes, and they can also be inversions or interventions into the original song. What do these covers mean to you, specifically "Beverly Hills" and "Just A Girl"?

I think that "Just A Girl" is still crazy relevant and especially resonant with me. It's hard not to feel like "just a girl" in this industry, or rather, it's easy to feel like an outsider if you aren't a cis-guy. "Beverly Hills" is also kind of an outsider anthem, but I think my version is certainly a bit ironic. Weezer is like... ultimate dude. I remember trying to impress my dude cousins when I was in middle school by telling them that I liked Weezer.

Weezer and No Doubt are an interesting pair of bands to cover together. Both alt-rock bands like Weezer's sometimes toxic masculinity and the legacy of that era's girl power have been much discussed in recent years. Were those things you were thinking about as you created these songs?

Yes, absolutely. They feel like this funny duo of girl vs. boy which was so prominent in that era and is honestly still so pervasive in pop. I identify with something more fluid and it felt good to make both of these my own. I think we need to unpack the issues of "girl power" as well as all that toxic manly shit.

The EP's called Just A Girl. Obviously it's one of the tracks, but what does the slogan mean to you in the context of this project?

I think it means a few things. In a literal context, it could be a reflection of how I feel everyday. I'm just a person making music and trying to pay my rent. In a more abstract sense, it could be so many other things: how small I feel trying to make it in a competitive, petty industry or how binary our culture is when it comes to labeling people based on how masculine or feminine they present themselves.

Aside from the obvious (that it was a covers EP), how was making Just A Girl different than Fight or Flight Club? How is your sound evolving?

This collection of tunes just flowed. The other EP was a process — months of brain vomit and figuring out what I liked. I think I'm discovering my proclivity for making things sound cinematic and you can really hear that on this new EP. I'm a sucker for melodrama.

What's your take on our late 90's early '00s nostalgia right? Why are we so obsessed? Good, bad, inevitable?

Oh it's inevitable. It's the birth of the Internet. It's like the cultural archetype of everything that's happening now. It was absurd and tasteless, highly materialistic and shockingly unaware. It's a meme. I also think it's something that echoes across generations because of its codependence on the world wide web.

Much has been made of your inspirations from occult and witchcraft — is that at play on your new project?

Always. I put witchy easter eggs in everything. I'm putting a spell on all of you.

Weirdo, left-field pop is really thriving right now. Who are some of your favorite artists releasing music right now?

Whoa, okay let me think... Obsessed with Yaeji, SOPHIE, Rina Sawayama, Gwenno, Empress Of. I listened to "OMG" by Ceci G like 50 times in a row recently.

What's next musically for you, and what kind of fashion/modeling projects have you been working on of late?

I'm working on about 20 original songs right now. I'm really trying to level up and hone my production game while nailing down a cohesive sound. I'll also be putting out a collaborative A-side / B-side soon. It's kind of heavy but addresses my darkest inner life in a very silly way. As far as fashion goes, I recently did a collaboration with non-binary label Official Rebrand and we're going to be putting out an original tee soon. I'm stupid excited about that. I've also been lucky enough to work with some incredible creative minds on upcoming projects — jewelry designer Paige Cheyne, creative director/photographer May Daniels, and my BFF who can do literally everything (seriously everything, go hire him now) Tanner Williams.