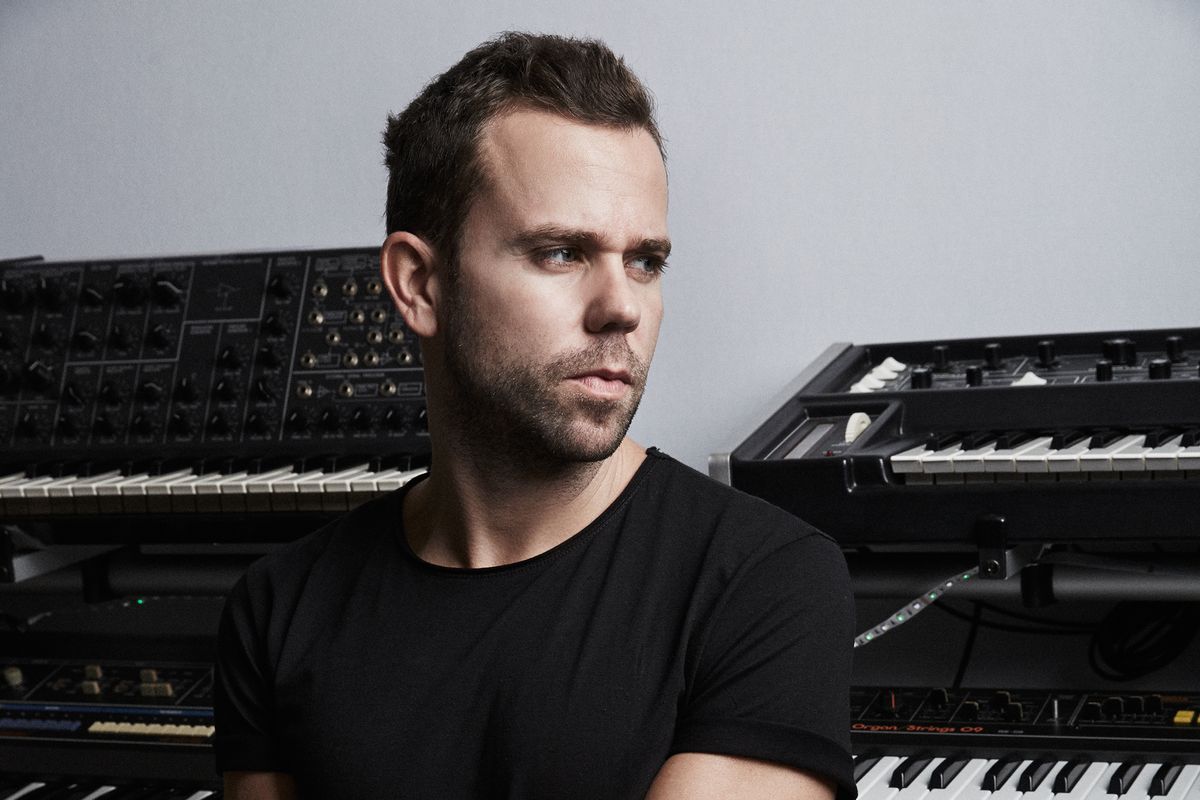 M83 have basically ruined "epic" and "cinematic" for every other band. Frontman Anthony Gonzalez would often use these words himself to describe the records he created during his unimpeachable run starting with groundbreaking digital shoegaze of 2003's Red Cities, Dead Seas and Lost Ghosts through the John Hughes homage Saturdays=Youth and critics almost invariably followed in kind. By 2011's explosive Hurry Up, We're Dreaming, M83 was a genre of one, described by Gonzalez as a "mixture of Vangelis, My Bloody Valentine and '80s pop."

Prior to this supernova, the soft-spoken France-to-LA transplant achieved his optimum level of public notoriety: M83 records produced regular critical acclaim, modest festival bookings and singles that grazed the mainstream consciousness. But the completely unexpected success of Hurry Up single "Midnight City" provided the kind of career boost that almost never happens to an artist ten years deep into their career and allowed him to live out previously inconceivable rock star fantasies: there were two years of exhaustive touring where Gonzalez had to evolve from a studio mastermind into a frontman, followed by a soundtrack for a Tom Cruise blockbuster (Oblivion) and licensing so many songs from Hurry Up that it became, in his words, "obnoxious." Gonzalez elaborates, "When my music's played at a party, I have to leave the room. I just want to hide and be a ghost for five minutes."

Five years later, his highly anticipated follow-up hints at his opinion towards the rock star lifestyle: it's called Junk. The explanation behind the title has a more M83-style ring to it, as it's Gonzalez's statement about impermanence in pop culture: "We're all gonna be digital junk floating in space." Gonzalez is aware that the record's more fun and free approach could lead to Junk being seen as a self-fulfilling prophecy by critics and there really is no precedent for it in his discography: it starts off with four frothy pop singles rather than a drawn-out introduction and altogether mirrors the title in its odds-and-ends presentation. There are also startling collaborations with French singer Mai Lan, Beck and...a guitar solo from Steve Vai. "I wanted to break the image of being a serious guy, which I'm not. [It's like,] 'Fuck it, I know you expected another cinematic album and this is not what i'm gonna give to you.'" During our talk in his expansive new Silver Lake home, Gonzalez touches on the stratospheric expectations for Junk, his unanticipated influence on pop music, an increasingly painful separation from his French homeland and collaborating with the guitar god of his youth.

Are you concerned about how this album might be received by people who just know M83 from "Midnight City"?

Are you trying to scare me? [laughs] I'm a stressed out guy, it's never gonna change. Every time I'm releasing an album, I tell myself, "Next time, don't care about anything." It just doesn't happen that way. I'm gonna tell you the truth...people are maybe expecting too much of me in a way. Seeing my name at the top of Coachella kinda frightens me. I'm playing in front of 50,000 people, do I have the ability to entertain them for an hour?

During the reissue of your earlier albums in 2014, you predicted that this might be your angriest album -- Junk certainly sounds like the opposite.

Things change! It's amazing how much can change from day to day. When I just got off a huge tour, I thought I wanted to do a super-commercial album. "Maybe people want to hear more 'Midnight City.'" I was just confused, I don't want to be just Top 40, those things just disgust me in a way. I don't feel like I'm a part of that family.

A major difference between Junk and previous M83 albums is that you're referencing TV shows as an influence rather than movies. What about Punky Brewster and Who's the Boss? spoke to you over the past few years?

I truly believe there's less passion behind TV than there was 20 years ago. The golden age for me was the beginning of the '80s. TV was supposed to make you forget about your day of hard work, and when you're watching a 20-minute Punky Brewster episode, there's this innocence that has disappeared from the TV screen. All the TV themes [now] sound the same to me, there's no love. When you listen to the TV themes of the '80s, there's something almost sad about them, you feel the passion. There were mistakes. Perfection is the death of art in a way.

There are songwriters in the Ultra/EDM realm like Porter Robinson and Madeon who seem clearly influenced by M83, have you kept up with acts like these?

Poor kids. [Laughs] Saying that M83 is an influence is nice to hear, but I didn't invent anything. I wish I could be an artist from the '70s or '80s because I feel like at the time, there were so many open windows and sounds to create and the arriving of new technology. What can you invent nowadays? For me, it's impossible. Instead of trying to find the sound of the future, I'm trying to look back and bring what I used to love when I was a kid. It's very important to stay true to my influences. A mixture is what sounds original, you have to mix all of your influences.

What does Junk express about Anthony Gonzalez personally in 2016?

Yes it's pop, yes it's '80s and fresh and fun, but there's a lot of melancholy and sadness to it. I'm coming from an album that made a huge impact on people, but especially with what happened in Paris, I felt so far away from my country and so far away from the people I really love that were really in danger and still are. I felt useless being in the studio and making music. I wish I could be there supporting my friends and people who suffered. I missed France, I missed my roots and talking English every day is becoming a real struggle. Even if I've been in the US for six years and I love it and it helped me in my career and I grew up so much as a human being and a person, I'm still French and it's never gonna change. I hope people are gonna feel the French side [of my personality] being stronger on this album. I felt like writing in French was a way to get closer to my roots.

Beck appears on this album and some of Junk reminds me of what he did with Midnite Vultures, emphasizing the more chintzy aspects of '80s pop and funk in a cheeky way to sort of deflate the idea of himself as a serious auteur.

It's funny because i didn't really like [Midnite Vultures] when it first came out. But he's putting himself in danger and this is what people should always do. Being safe is the death of an artist, every time he puts an album out, he's gonna take you on a different ride. I thought it would be difficult to approach him because I have so much respect for him, and he has a career that I'm dreaming of. But it was super easy to talk to him, he was very approachable and very kind to me.

What about Steve Vai? Most guitar virtuosos from the '80s tend to have the reputation of being divas.

I grew up playing guitar in the late '80s and he was The One. When I looked at his album covers and his super unique sound with infinite sustain and chorus, it felt like I was traveling on a spaceship in the future. I needed that for this song. I couldn't have asked anyone else. I'm not sure if he was familiar with my music, but he liked the track. I didn't meet him but I hope maybe he can come play with us. It was so easy for him to be part of this, he's super humble and responsive. He's one of these artists who has a strong fanbase, but people in the industry nowadays might think he's passe. It's the total opposite. I would dream of a duo of Steve Vai and Taylor Swift...but I've done it, so she can't now.

Junk is out today.