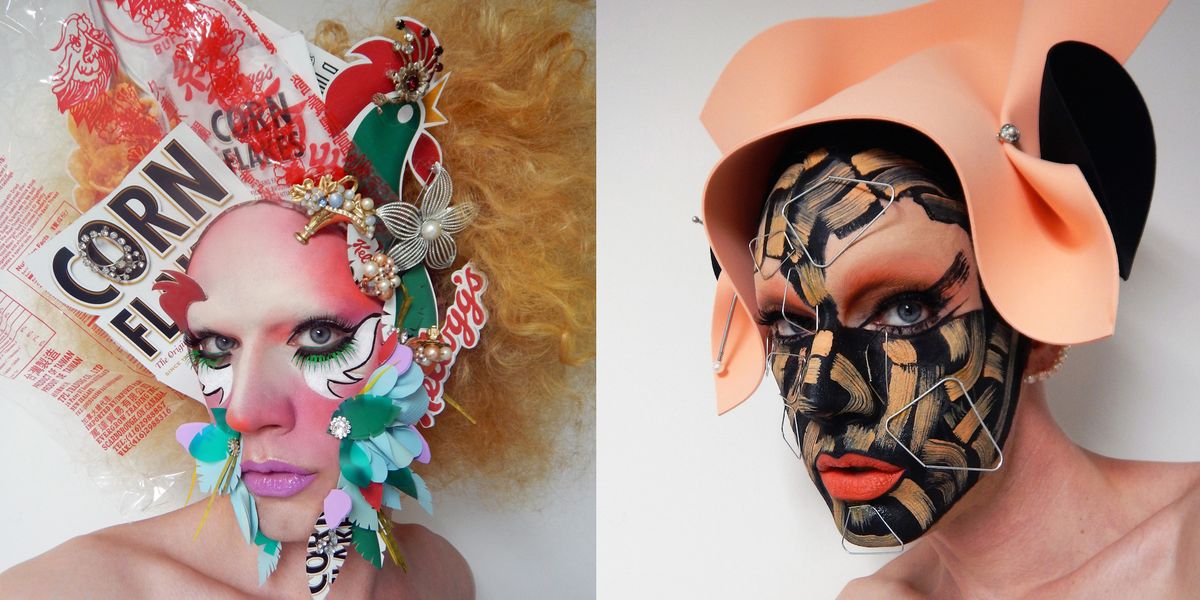 Over the last 15 years, Lyle Reimer has made a name for himself in the cosmetics industry for his work at MAC in Artist Training and Development, but more recently he's found a new level of appreciation on Instagram, where almost 100K fans follow him at LyleXOX to see his otherworldly self-portraits. Using his face as a blank canvas upon which to build his ornate mixed-media collages, Lyle breathes new life into trash and recycled goods, combining makeup, paper, and found objects in order to transform himself into something that's part drag, part monster, and 100% haute couture perfection. "A lot of people aren't aware of the fact that I make everything you see," the artist tells me over the phone from his home in Vancouver, "but the people that get it, they understand all of the work that goes into it, and that's the following I want anyways." And with a number of big international projects and a children's book with B. Åkerlund on the horizon, it seems like LyleXOX's following is only going to continue to grow.

What was your first experience with makeup?

I was born in Saskatchewan in an incredibly small town, like the population was less than 200. It's the classic story of growing up in a really small community where you always know that you don't really fit in. But I had an aunt who worked in the makeup industry, and I remember her teaching me how to do special effects makeup when I was in elementary school; she would use toilet paper and maple syrup and make all these faux wrinkles. I think when you grow up in a small town and there isn't access to much stuff, it forces you to be more creative and think outside of the box. I've been doing makeup for 16 years, and just recently, it's really taken on a whole new life. Social media has completely changed and revolutionized the way I work. It's allowed me to have access to things I never would have dreamed of in the past. It's truly incredible. There will be times when I get an email and I'll start crying because I'm just overwhelmed by the response -- people are so positive and so into it. It's really become my drug of choice, and I don't know how to get off of it: I'm addicted.

What is it about the juxtaposition between mixed-media elements and makeup that you love?

I like to think of it as so much more than just makeup -- it's facial sculpture. When I first started doing it, I had this moment where I looked at myself in the mirror and thought, dude, what are you doing. You're getting close to 40 years old, this is crazy. Then, the more I did it, I was like, nope, this is who I actually am. It sounds cheesy, but when you are truly doing something that you feel completely passionate about and it feels so authentic to you, that is when things start happening. When you don't censor yourself and you just do what feels like you, that's when you get the best work.

I've never considered myself someone who does drag. Obviously, I have huge respect for the art form, but for me it's not about female impersonation. Even though most of the looks look very feminine, I still don't relate it to trying to be female. I think of it more in terms of transformation. At the end of the day, that's just not how I associate myself at all. I think of myself as an artist, and that's it.

Do you have any specific things you draw inspiration from?

Inspiration comes from the most random and mundane objects of life. I collect stuff all the time, and people at work bring me bags of their garbage. The more hideous, the better. Sometimes my partner is like, "Lyle, you really need to purge your studio, it's getting too crazy." But I can't just let go of all these random little things, because I don't know when I'm going to need anything and then I'm going to have to go hunt for it again! 98% of the things we use are recycled or repurposed. I'm trying to be more conscientious of organizing, but in the moment, the art takes over and you just get a little carried away. I can't possibly keep all the headpieces, but when I think of doing a big gallery show down the line, I would like to have some of my pinnacle pieces as part of the display.

What do you see as the future of beauty?

Trend is becoming more and more obscured, and there really is something for everyone. I think the embracing of individuality to the extreme is where everything is going. So with makeup, what I want, and what I see happening, is embracing more of your own personal style and whatever feels right for you. Just being more in tune with what is actually authentically you, and if you feel you need to glue buttons to your cheeks instead of blush, then do that.

What would your dream project be?

I want to do more collaborations with designers. I always think of teaming up with John Galliano and doing something for a Margiela lookbook. If we're talking dream scenario, that would be a dream come true.

All photos courtesy of Lyle Reimer