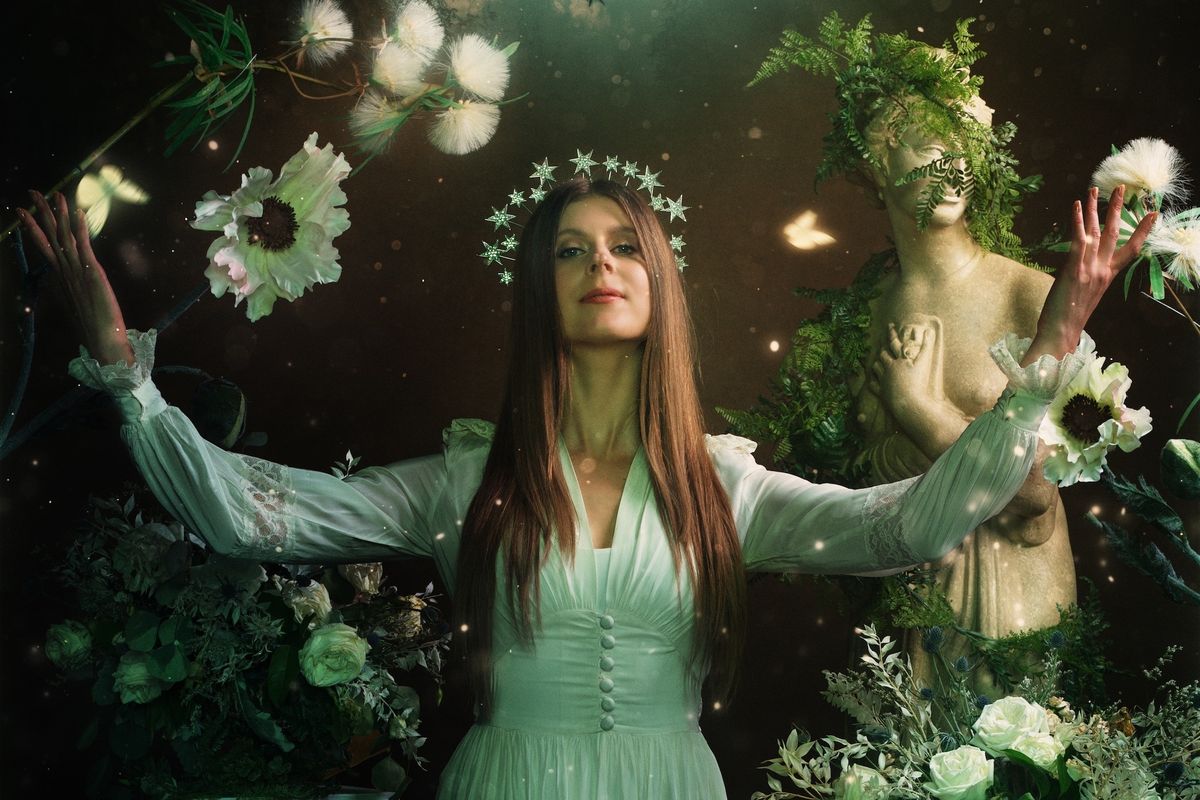 Lydia Ainsworth Wants to Connect in Our Disconnected World

Since her debut album, 2014's Right From Real, and then on 2017's Darling of the Afterglow, Ainsworth has utilized the mechanics of synths, the drama of strings, and the meditation of ambient sound to tell impressionistic tales about nature and society. Then there is her voice, which she manipulates through distortion and layer, except when it's to the front of the mix, enchanting and serene. Consider Ainsworth's classical composition background, and you'll understand why so much of her music sounds so dreamy. Not unlike art-pop predecessors like Kate Bush or Bat For Lashes, listening to Ainsworth helps one connect to their subconscious, and to the world we live in.

Continuing in that vein is her upcoming, self-released and produced third studio album, Phantom Forest, which is out May 10. As a whole, it centers on protecting the planet from its human-led destruction. Today, she premieres new single "Tell Me I Exist," a plea for meaningful connection in a world of technological excess. As it turns out, as Ainsworth told PAPER, the song was inspired by the rise of facial-recognition software. "To be seen is just a basic human desire," she explained.

But what happens when that natural desire goes awry? Lightly pulsing synths ebb and flow, creating tension as Ainsworth's voice, which feels computer modulated, holds steady amid the fray. "Now it seems anonymity is luxury to all," she sighs, before the song's searing chorus, during which Ainsworth seeks refuge from prying eyes in Mother Nature. It's both sticky enough to be remembered, and honest enough about our social and environmental crises to be deeply felt. You might even be inspired to seek your own connection away from screens, and back to the earth, while we still can.

Listen to the PAPER premiere of Lydia Ainsworth's "Tell Me I Exist," and learn more about her new music, below.

"Tell Me I Exist" seems to question the modern world's obsession with instant validation. What has your journey been like with that?

For the song, I was inspired by people obsessively using facial-recognition software to see what paintings their faces matched with, in search for some kind of connection. To be seen is just a basic human desire. I am not so much questioning our obsession with our desire as I am questioning the price we are paying for attempting to fulfill it, namely the price of our anonymity.

What do you think the advent of technology has inspired within you?

The lyric "Look what I've become" is meant to confront both our desire to be seen, but also it's meant to kind of break the fourth wall... it's a sardonic wink at the authoritarian machinery behind the curtain that we have become numb bystanders of, force-fed in an incredibly Orwellian manner. I find many facets of social media to be meaningful and I feel more connected than ever with kindred spirits who I'd probably not been able to connect with had the technology not been there. But I am afraid of the way it is being harnessed by dictatorial powers. Our faces all stored in a tidy database. Technology has become a distraction to the truth. Independent media, free discourse and anonymity hang in the balance of a selfie.

"If I am lucky enough to hear birds or the rustle of trees I feel immediately revived and inspired."

How does spirituality and nature inform your music?

Nature has always been my escape and my comfort. She has always been the starting point for me. Her life-affirming sounds settle my restless soul. Living in cities all my life I try to escape to pockets of green within and outside of the concrete jungle whenever I can. If I am lucky enough to hear birds or the rustle of trees I feel immediately revived and inspired. My album Phantom Forest revealed itself to me as a kind of play taking place in Mother Nature's vanishing home. I'm singing from various perspectives. From a Greek choir, myself, and on a few songs I am singing from the perspective of Mother Nature. It was important to me to lend my voice to her.

Lydia Ainsworth on Instagram: “Thank you for all the very kind messages on my new single, truly means the world to me. I’m excited to announce I’ll be releasing Phantom…”

Lydia Ainsworth will be on tour with TR/ST thoughout April and May. See all upcoming dates below.