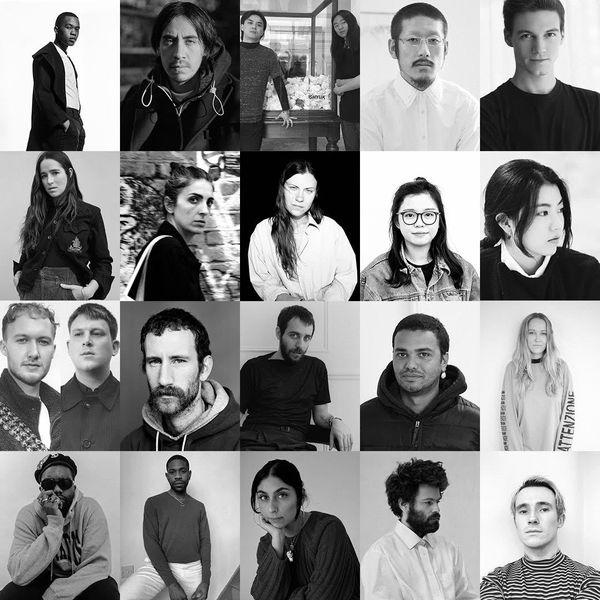 Since launching in 2013, the LVMH prize has become arguably the most coveted honor a young designer can receive. With its distinct ability to enhance notoriety, the annual award provides up-and-coming creatives with the opportunity to receive LVMH mentorship, a €300,000 grant, and if navigated correctly, an imminently prosperous career. The 2019 shortlist has been revealed, and the 20 semifinalists representing 15 countries have been selected for the chance to follow in the promising footsteps of previous winners, including Marques Almeida, Marine Serre and Simon Porte Jacquemus.

This year's range of talent includes a number of designers who have already secured a reputable buzz, including Emily Adams Bode's eponymous brand, Irish designer Richard Malone, and New York-based Caroline Hu. Among the semifinalists, over a quarter of them are London-based, a nod to the various British predecessors who have successfully earned the award. Two of the designers are from Africa — Thebe Magugu of South Africa and Kenneth Ize of Nigeria — a continent considerably lacking representation within mainstream fashion. Additionally, many of the nominated designers have integrated sustainable materials into their brand's fabric, tapping into the fashion industry's collective shift towards heightened ethical awareness.

Related | Bode's Dedication to the Life of Todd Alden

LVMH acknowledged the trailblazing efforts of this year's contestants. "Sustainable and ethical fashion is also making a stand, with several designers integrating this approach into their brand identity," the company's press release read. "Furthermore, some of the semi-finalists are involved in the field of innovation, both in terms of the materials and the techniques they use. This is an accurate reflection of the current concerns of the fashion sector, which are also those of the LVMH Group."

LVMH on Instagram: “★ The 2019 @lvmhprize shortlist ★ Say hello to the 20 young and talented designers on the #lvmhprize2019 shortlist! Good luck to everyone,…”

The 20 shortlisted designers will face a panel of 63 experts within the industry on March 1st and 2nd during Paris Fashion Week. The range of fashion journalists, e-commerce and retail executives and academics will narrow the list down to eight finalists who will ultimately present their collections to a jury of acclaimed designers, including J.W. Anderson, Marc Jacobs, Clare Waight Keller and more.

Karl Lagerfeld was one of the panel's most prominent members. The founder of the prize, Dauphine Arnault, executive vice-president of Louis Vuitton, reflected on the impact of the designer's passing during an interview with Vogue. "I met Karl 20 years ago and we became friends. He was so supportive of the LVMH Prize since it started in 2013. The Prize will no longer be the same without him. He was so generous of his time, seeing each young designer selected and giving them great advice. He loved to spot new, emerging talents. He will be greatly missed."

3.PARADIS by Emeric Tchatchoua (French designer, based in Montreal).
Menswear, showing in Paris.

ANREALAGE by Kunihiko Morinaga (Japanese designer, based in Tokyo).
Womenswear, showing in Paris.

EFTYCHIA by Eftychia Karamolegkou (Greek designer, based in London).
Womenswear, showing in Paris.

GERMANIER by Kévin Germanier (Swiss designer, based in Paris).
Womenswear, showing in Paris.

LECAVALIER by Marie-Eve Lecavalier (Canadian designer, based in Montreal).
Womenswear, showing in Paris.

PARIA/FARZANEH by Paria Farzaneh (British designer, based in London).
Menswear, showing in London.