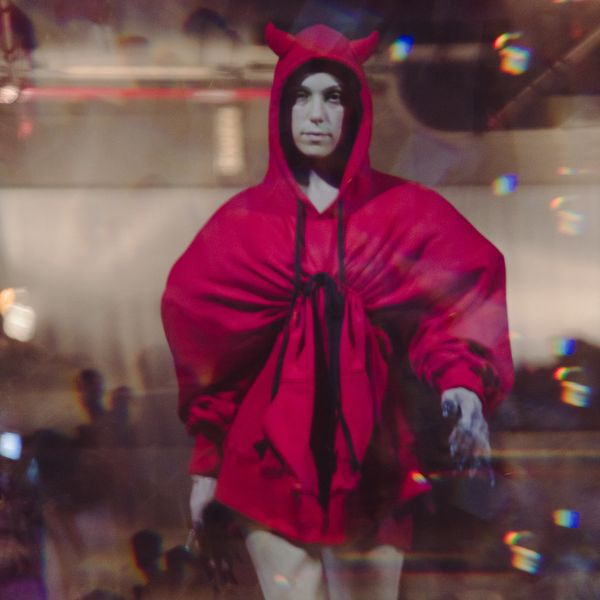 The spring 2019 collection from LRS was a glorious mashup of creepy obsessions. The show, held in an industrial gallery space on the Bowery, kicked off with an eerie, electric soundtrack: a remix of Flo Rida's "Good Feeling," sung by a kids' chorus. Artist Daniela Lalita appeared in full clown makeup (remember when there were all those clown murderers in the fall of 2016?), and classic western-style garments were reworked into sexy, cut-out filled playsuits, like if Shania Twain was an escort in space.

There was a model in a giant t-shirt with Jack-O-Lantern holes, models with shirts painted onto their bodies. "We wanted everything to be crazy, wacko," said designer Raul Solis. "Just a good time!"

And at a key moment of the show, artist Carly Mark appeared as the devil, in a ruched sweatshirt with horns. Mark's work often pays homage to horror movies and body modification — she creates otherworldly characters, commenting on Internet culture and the hyperreal (she added her own prosthetics in addition to the LRS outfit). "She's a friend of ours, a friend of the brand, so we wanted to highlight who she is, and how important she is to the brand," said Solis. "So why not make her a cool costume?"

Solis also played with the idea of luxury accessories, using crushed cans found on the streets of Brooklyn and turning them into earrings and belt buckles. "We were looking at what an accessory would be for my brand, and we're still very small," Solis explained. "And so it's almost like a jab at these luxury leather goods."

He laughed. "We are not that brand!"