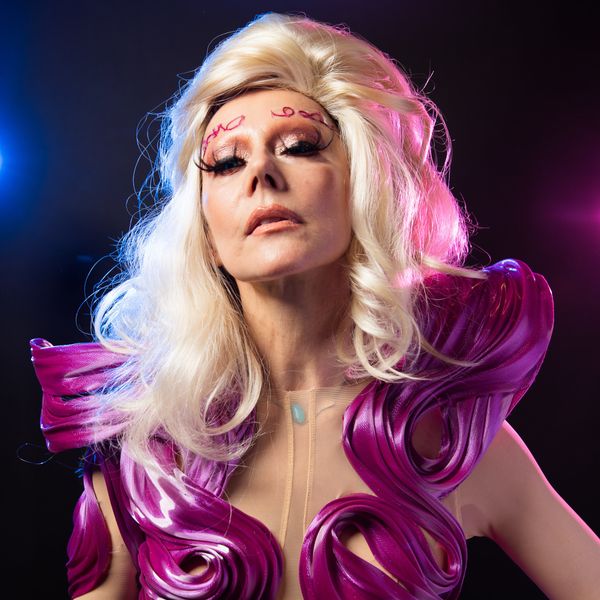 The Grit and Glam of Love Ball III

A head-to-toe sequin covered Superman, collared only by Wonder Woman, looming in front of fashion's brightest stars; a stalklike, hair-covered being wiggling down a runway; Wig star Charlene delivering an earth-shattering performance of "Drops of Jupiter," and receiving a sea of finger wags and gay yelps from the crowd in front of her; a ball judging panel consisting of Marc Jacobs, Teyana Taylor, Patrick Starrr, and Kevin Aviance. The scene at Love Ball III could only have been conceived by the mastermind behind New York City nightlife herself, Susanne Bartsch, the CFDA, and incomparable queer legends like Jack Mizrahi, Kevin Aviance, and the late Hector Xtravaganza. It was sparkly, it was loud, and it was certainly glamorous. It was, most of all, though, full of unabashed self expression and queer love.

Love Ball III, held on June 25, 2019, was a follow-up to Susanne Bartsch's historic pre-millennium galas, some of the first charity events to raise money for those affected by HIV/AIDS. Benefitting the CFDA-Vogue Initiative/New York City AIDS Fund of The New York Community Trust, Love Ball III was planned to be the reincarnation of the same spirit that charged up the community to throw the very first Love Ball back in 1989. It's safe to say that the event did not disappoint in any way, shape, or pose.

Led by epic Master of Ceremonies, Billy Porter of Kinky Boots and Pose on FX, the night consisted of dips, twirls, swirls, and overall intensity in every category. After guests were seated at a series of tables scattered around the main room of Gotham Hall, the ball began rather quickly and lasted the entire night. Like a true Bartsch party, each moment was packed to the brim with action. Those expecting purely vogue performances were surprised with the sheer expanse and range of talent that took to the stage to compete in each of the six categories: Head to Toe, Hair Spectacular, Beauty and Face, Move to the Groove, Show Stopper, and Battle of the Legendary Houses.

The first category, Head to Toe, began with a bubbling bang — the most fashionable creatures of your wildest dreams strutted slyly onto the stage, eyeing up each judge and attendee. Notable looks came from the likes of Magdalena Femanon and Pissy Pussy, both of whom transformed themselves completely into towering monsters ready to wreak havoc on the uppity world of couture. The trophy for the category ended up going to Roger Superstar, and deservedly so; Superstar created two sequin-encrusted looks straight out of a DC Comics comic book. A leashed Superman was carried out by Wonder Woman to a roaring crowd.

As the night went on, it became evident that the moments of shock and stun were not going to dwindle, nor be stifled. Each category was tight in terms of judging, with each contestant staking their claim on the runway for the crowd to bask in. The aforementioned range of talent was what really seemed to draw massive applause from the dinner guests, however. The Move to the Groove category consisted of endless flips, head-spins, and intricate choreography, while watching the Beauty and Face category, sponsored by MAC Cosmetics, was like reveling in the greatness of a Renaissance painting. When the category's winner, Yasmine Petty, stepped out from behind the stage, the scene inside the hall went from calm to luxe chaos as table mates stood in tandem to cheer on the slinking beauty.

The apex of the evening, however, was most certainly the final and most anticipated category, Battle of the Legendary Houses. Posing the house down, legendary ballroom families took to the stage to compete for one of the six gorgeous Love Ball III trophies, designed by premiere contemporary artists like Raúl de Nieves and Kenny Scharf. The House of Xtravaganza ultimately took home the Jack Pierson trophy for the Battle of the Legendary Houses category, but it was a fight until the end, with competitors like the Balenciagas and LaBeijas grinding for the win.

When the night concluded, every trophy had been distributed, and donations had been generously made, something heavy lingered in the air. Perhaps it was stray feathers falling off of detailed homemade gowns, or glitter swirling around as drag queens touched up their makeup before heading to the after party at the Boom Boom Room. Without having met me before, Kevin Aviance approached me to say hello; Amanda Lepore greeted YouTube mogul Patrick Starrr well after the evening's conclusion and posed for a photograph; NYC nightlife hosts and stars mingled outside before calling their Ubers, posing near trophies and complimenting each other's ensembles while tourists snapped pictures and smiled. Risking claims of over-exaggeration or triteness, I believe it to be true: there was love in the air.