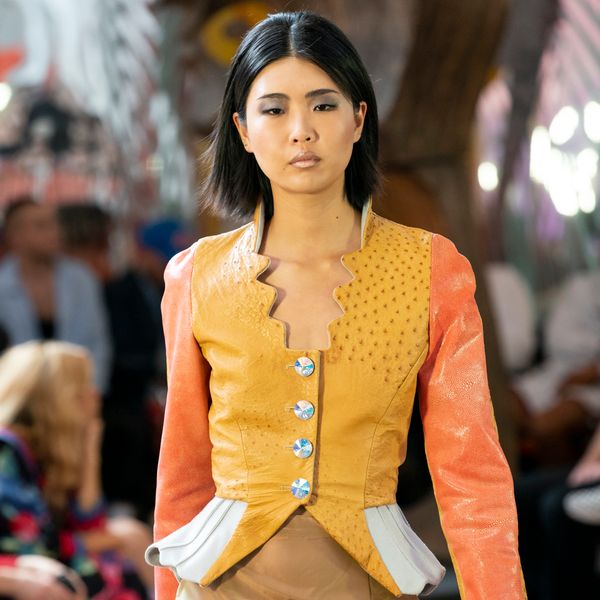 Lou Dallas Took Us to Saturn

Lou Dallas, the idiosyncratic label from designer and artist Rafaella Hanley, is now a CFDA/Vogue Fashion Fund finalist, and you can, uh, tell. Her Spring 2020 collection, "Saturn's Bite," was the designer's most polished yet, without sacrificing the DIY vibe that made her stand out in the first place. If last season Hanley showed art school girls, this season they have, for lack of a better term, graduated.

Hanley said she was inspired by astrological "resistance arising" and "sci-fi insanity." But even though Saturn was biting, the looks were very sweet, laden with the Lolita-like frills that have long been a design signature (Hunter Schafer, who has worn Lou Dallas on Euphoria, was seated front row in a frilly apron). Mini cardigans, patchwork, and bows abounded, and my single favorite garment was a pebbled leather jacket with fur cuffs that had the air of a circus master.

The designer collaborated with tattoo artist Will Sheldon — both share a similar fairytale-slash-psychedelia, sugary but nightmarish aesthetic — on a blue rose design that was airbrushed onto pant legs and sleeves. Hanley said the rose symbolized resistance; a patch on a pair of jeans read "Savage Capitalism." Savagery notwithstanding, the models (and Schafer) sported two-toned stockings that seem like they could be big sellers.

The show venues on Sunday were really something to behold. Sies Marjan showed at Manhattan's Surrogate Courthouse (which Courtney Love called "a nice place to visit," iconic); Pyer Moss held an epic event at Brooklyn's historic, cavernous King's Theatre; Puppets and Puppets' dramatic show took place at the imperial Prince George Ballroom. And while the Lou Dallas space may have been slightly less imposing, it was no less beautiful.

Hanley's show took place at artist Ray Smith's studio in Brooklyn (Cobble Hill, aka Brooklyn for grown-ups), a space filled with art: glittering pink paintings on chrome backdrops lined the walls, and an enormous mirrored sculpture made for quite the centerpiece. Sunny light dripped everywhere. It was beautiful.