Lost for the Lost

We admit it, we're part of a Lost e-mail discussion group. But so is Best Week Ever commentator and our favorite gap-toothed funnyman Paul Scheer! So there. We're actually in the same group, so we asked him to write an idiot's guide to the show for those of you who have never seen it (and don't think we don't have a name for you in our group!). So in case you're too "busy" to watch the DVDs and catch up, here's a rundown of what you need to know. - Jen Carlson

Why is Ana Lucia such a bitch? Did you see the Dharma symbol on the shark's tale? How did Locke get paralyzed?

If you don't know what I'm talking about, then chances are you haven't been watching America's favorite new show, Lost. So my question to you is, "WHY THE F#@# NOT?" Lost is the biggest show on TV since Twin Peaks, but instead of watching it, you've spent the last year and half watching back-to-back reruns of Everyone Loves Raymond on TBS. I'm going catch you up, fill you in, and make you appear like you're in the know. Welcome to the GED version of Lost.

Oceanic Flight 815 went off course, lost radio contact and was ripped apart in mid-air after a bout of terrible turbulence. The crash left two sets of survivors on different parts of the Island -- neither knew the others were there until very recently.

Who are "the characters?" Everyone's talking about the "great characters."

First of all, don't be condescending. Here's an overview:

The survivors we have known are made up of a fugitive, a heroin addict, a doctor, a confidence man, an Iraqi soldier, a new mother (and baby), a rich step-brother and sister, a newly reunited father and son, a Korean couple, a formerly paralyzed man, a fat guy, and of course a no-nonsense black woman. All these characters make up the survivors of the front section of the plane. The other group of survivors is relatively untapped. We learn about them in the present as well as in flashbacks.

OK, they're trapped on an island. Big deal. Why do I care?

Because this island is crazy! First of all there may or may not be a monster on it. Secondly, we just found out that the island is a science experiment gone wrong. A collective known as the Dharma Initiative have set up six base stations all around the island to research different areas of science. So far we only have seen two stations. Finally, there is a group of "others" on the island that have kidnapped survivors of the crash and killed other island-dwellers. They are scary and some don't wear shoes.

That's a lot of info... what do I really need to know?

John Locke (bald guy): The island cured his paralysis (no one knows that he was ever paralyzed and we don't know how he became paralyzed). He's an optimist who wants to explore and fulfill what he believes to be his destiny.

Jack (ex-Party of Five guy): He's the reluctant leader. He lost his ability to believe (again, we don't know why).

The 43 survivors of the front section of the plane set up camp on the beach. The Iraqi soldier, Sayed, sets out to explore the island but instead finds a crazy French woman who is also stranded from a boat crash 16 years ago. She tells him about a group of "others" that stole her baby and killed her crew. Back at the camp the pregnant survivor, Claire, is kidnapped (presumably by an "other," who secretly mixed in with the group over the last few weeks.) After a failed search and rescue, Claire is returned (unharmed) with no memory of the experience. The "other" appears again and is killed in a moment of rage by Charlie, the heroin addict (we learn nothing about the "other" or his motives).

Back on the beach three men build a homemade raft while Locke and a companion stumble across a large metal hatch in he middle of the jungle. The men set sail on their raft and after a few hours of travel they encounter another boat. They think they're being rescued, but to their dismay, the boat is full of pirates who end up kidnapping Walt, the son of one of the raft-riders. The pirates then attempt to kill the rest of them by destroying the raft with a homemade bomb. The men are left stranded at sea.

Back on the island, the hatch is opened. Inside is a man named Desmond, who lives in the state-of-the-art science facility. Desmond also crashed on the island after a failed race around the world and was called into this hatch by an excitable man (who has since passed). Desmond was then told that he must enter a series of numbers into an old Commodore 64-looking computer every 108 minutes or else something horrible would happen (like the end of the world). Desmond escapes leaving the survivors to take over this repetitive task.

Back out at sea, the men begin to swim and end up on another part of the island. They are immediately attacked by what turns out to be... drumroll... the tail end survivors of the crash. The Tail-Enders are led by Ana Lucia, who is a real bitch (most likely because most of the survivors from her side have been captured by the "others."). The Tail-Enders join the raft guys and set out to connect the two groups by trekking across the island.

Meanwhile, Walt is appearing to the rich step-sister (Shannon) in visions that only she can see (in the visions, he speaks backwards. Twin Peaks much?). Trying to convince herself that she's not crazy, Shannon chases her vision of Walt into the jungle and is shot by Ana Lucia who thinks she is an "other" attacking her group. So far that's all we know.

Did you miss anything?

Here are a few things that might be worth mentioning:

4, 18, 15, 16, 23, 42 are the numbers entered into Desmond's computer and have significance throughout the show. These numbers are believed to be bad.

The creator of the show has been quoted numerous times as saying, "There are no dinosaurs on the island and the characters aren't dead nor in purgatory."

What if, even after reading this, I still never bother to watch the show? How can I save myself from the shame and embarrassment of not knowing what's going on in front of my friends?

Here are some scatter-brained theories that will make you appear smart. Toss them out there and let the other people in your group debate, while you reap the rewards of being in the know.

Do you think Alvar Hanso, that creepy guy that funded the Dharma Initiative might be Locke's dad?

The Monster sounds more like a machine then an animal. Who's with me?

Why don't the dudes' beards grow past perfect stubble?

Yes, for now. So what are you waiting for? Get yourself to a water cooler. You got Lost to talk about. 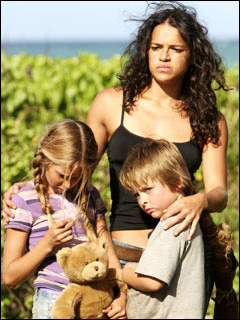 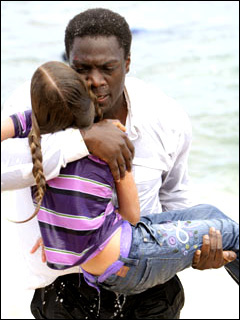