New cultural ground is being broken at HBO, as for the first time ever, a Spanish-language series — Los Espookys — is airing on the premium cable network.

"At first we wanted Los Espookys to be on some of the Spanish-language channels," executive producer Fred Armisen tells us. "But it was explained to me that there aren't a lot of outlets for new Spanish shows, so that's what brought us to HBO. And they suggested putting it on their main channel instead of HBO Latin America… now I'm just so, so happy that it is!"

Created by Armisen and Brooklyn-based writers Julio Torres (SNL) and Ana Fabrega, the six-part series, running now, is as bizarre a show as HBO has ever created. Executive produced by Armisen and SNL creator Lorne Michaels, Los Espookys is based in an unnamed Latin American country where the strange and eerie are a part of everyday life. The show follows a group of creepy-horror obsessed friends who run a business together, the Los Espookys company, that provides rigged chills and frights to those who want it, or need it, whether that's creating a fake exorcism for a struggling priest or pretending to abduct a US ambassador in exchange for US work visas.

Formed by the leather clad and lovable Renaldo (played by the excellent Bernardo Velasco), the Espookys troupe includes Andrés (Julio Torres), a brooding heir to a chocolate fortune with an insufferable yet beautiful boyfriend, Juan Carlos (José Pablo Minor); the tenacious Espookys crew hand and part time dental hygienist, Úrsula (Cassandra Ciangherotti), who gives sage advice like, "You can't keep making big decisions with your eyes"; and Úrsula's sister, Tati (Ana Fabrega), who juggles many truly insane odd jobs (like moving the second hand on a town hall clock or spinning an already-broken desk fan) while acting as the group's test dummy for all their frights. Armisen plays Tico, Renaldo's beloved uncle who is happily living his dream as a parking-valet in LA whose uncanny ability to park any vehicle in any space has made him legendary.

Los Espookys seems inspired by a diverse set of cultural references, including vintage and modern horror films, film noir, classic telenovela, and, of course, SNL. But Armisen's Emmy-nominated Portlandia could have the most influence of all: the dream-like aesthetic and seemingly random happenings in Los Espookys, although based in a totally separate hemisphere from Oregon, is eerily similar to IFC's eponymous Portland show. The ways in which Portlandia's antagonizing characters were malicious but seemingly benign or how the series regularly blended real life with surreal plotlines is mirrored in the Espookys' misadventures. 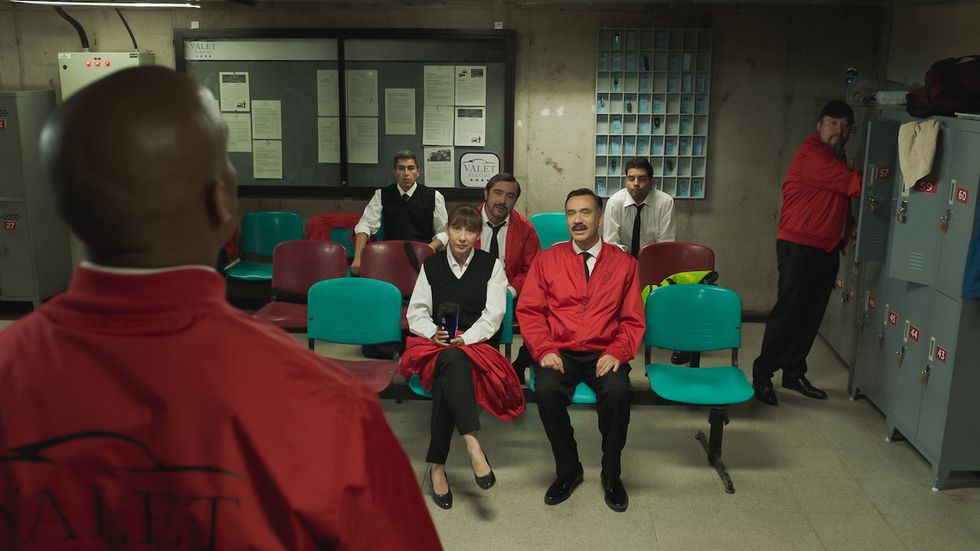 While Los Espookys isn't particularly spooky, it is creepy — each episode deals at some point with death, gore, the unknown, mysticism, and the peculiar, generally. "We aren't actually huge horror fans," Torres admits to PAPER. "Fred's really the one who is so into it. I think he's most interested by people who are really interested in horror."

Armisen's interest in horror fans is obvious when you consider two of his darkest characters from Portlandia: Vincent and Jacqueline (played by Portlandia co-star Carrie Brownstein), the goth couple who drive a hearse and are as obsessed with the grizzly and strange as anyone on the crack Los Espookys team.

"Those were my favorite characters ever. I wanted to live in them," Armisen says. "In one of our Portlandia sketches, Vince is talking about what he wants his funeral to be like, all thunder and lightning and scary. And I really do want my funeral to be terrifying and scary! Los Espookys is like an extension of that energy. It's totally the same sensibilities. It is my hope that they [Vincent and Jacqueline] will one day visit Los Espookys."

Aside from bringing Spanish language-entertainment styles and sensibilities to American HBO viewers, Los Espookys is a pioneering show for the inclusive and LGBTQ+ friendly perspective it brings to Latin American culture. The show boasts an inclusive cast with mainly female and LGBTQ+ characters as well as a queer protagonist, Andrés, whose blue hair, ultra chic outfits, and ever-distant stares are pulled off with witchy aplomb by Torres.

"I want it [LGBTQ+ visibility in media] to be the norm so much. It would be nice to get to a place where it's not even noticeable," Armisen says. "Personally, that's what it's become in my life. It's a part of my workday, my everyday, and so I've really grown to love it. That's reflected in Los Espookys. There's a moment in an episode where Andrés and his boyfriend Juan Carlos are discussing getting married so that their two family businesses — chocolate and cookies — can join and become one, but it's a moment that just breezes by. [Their homosexuality is] never treated as a plot point or a 'controversy.' Normalization is the goal, and I think we achieve those goals little by little."

Now in its first season, you can watch Los Espookys on HBO's main channel and all corresponding streaming platforms every Friday night at 11:00-11:30 p.m. ET/PT.