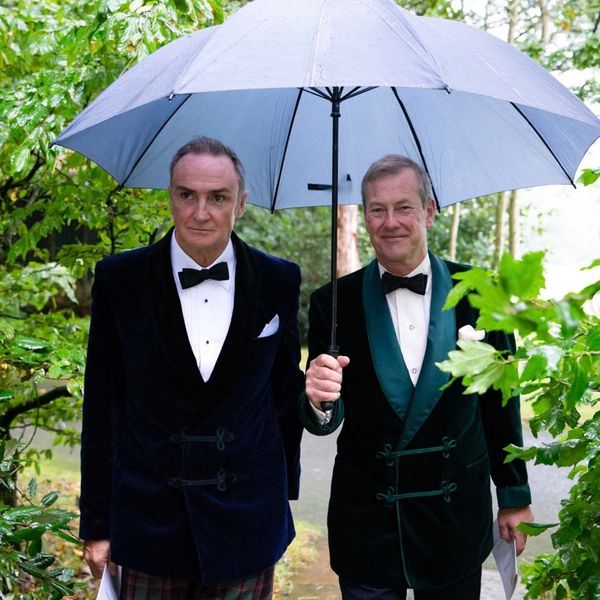 Lord Ivar Mountbatten has become the first member of the extended royal family to marry a same-sex partner. Mountbatten is the younger brother of the Marquess of Milford Haven. He's a descendant of Queen Victoria, Grand Duke Michael Mikhaelovitch of Russia and the poet Pushkin.

Mountbatten was married and has three daughters with Penelope Thompson. He came out as gay two years ago and began a relationship with James Coyle, a flight attendant. It's a very modern arrangement which has the support of Mountbatten's former wife. Penelope even walked the groom down the aisle for the wedding.

Mountbatten is one of the godparents of Lady Louise Windsor, the daughter of Queen Elizabeth's youngest son, Edward, Earl of Wessex. The Earl and his wife are godparents to two of Mountbatten's daughters. The Wessex's were unable to attend to the wedding but sent congratulations. The couple plans to honeymoon later this year in Croatia or Greece.

One strong indication of how times have changed is the press coverage the wedding has received. Even conservative news outlets like the Daily Mail have treated the wedding in a supportive way. It will be interesting to see if a member of the royal family attends a same-sex marriage in the future.

The last time an LGBTQ member of the extended royal family was in the news was the Queen's nephew, the Earl of Snowdon (then Viscount Linley) was being blackmailed by two men who claimed to have a video of Linley having sex with a male aid. Linley reported the blackmailers to the police and they were each sentenced to five years in prison.