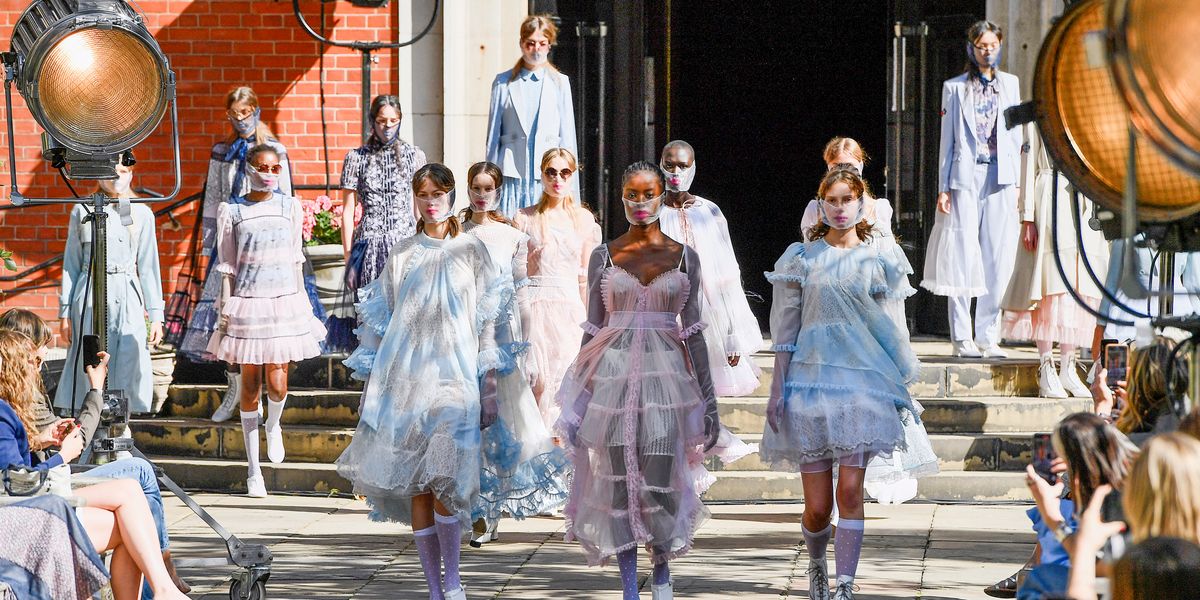 On the cusp of a second national lockdown, London's mostly digital fashion week outing commenced amongst the upheaval of the UK's latest gathering restrictions. The week was made up of a mix of video unveilings and physical runways that showcased the Spring 2021 collections of the designers opting to show in these unprecedented times. Once again, the British Fashion housed everything in one place, as the shows were streamed across the London Fashion Week Website. From pandemic-inspired collections to brands challenging the concept of masculinity, find below the highlights of London Fashion Week.

Halpern’s ode to the frontline worker

Michael Halpern's Fashion Week film was another glitzy and vibrant affair. The Central Saint Martin's grad provided multidimensional party looks that exuded the extravagant elegance synonymous with his brand. But while the loud sculptural garments commanded much attention, Halpern's focus during his Spring 2021 video was the cast of models. From bus station controllers to nurses, the touching testimonials of the 21 incredible female frontline workers featured in the film were shared in a bid to celebrate those keeping the UK running during the COVID-19 pandemic.

Halpern spoke on the "antiquated" nature of presenting a fashion show in these testing times while also explaining to Vogue UK that he "didn't want to do fantasy" and ignore what was happening in the world. This celebration of the working woman injected London Fashion Week with a distinctly humane energy, one that will hopefully remain in the seasons to come.

Bethany Williams revealed her collection, entitled "All Our Children," with a short video that was a thought-provoking display of family and unity. Williams has been known to collaborate with a variety of charities when designing, and this time she chose to support The Magpie Project, an initiative that helps mothers and children put into temporary living situations.

While poet Eno Mfon narrated, we saw a parade of loud and abstract prints that derived from drawings done by the children of The Magpie Project over the national lockdown. The collection also featured childrenswear and sustainable fashion in the form of a bag crafted from recycled children's books. It was a candid display of the resilience of the mother-child bond and gave an insight into the social consciousness a brand can embed in its work.

Art School opted for the more traditional runway format this season, albeit without an audience, in Highgate's Waterlow Park (offering a full-circle moment as this is the area in which the brand came to fruition). Its gritty array of trench coats, strapless mini-dresses and elevated combat boot came in inky-blues, muddy-greens and blacks.

Eden Loweth, when speaking with Vogue UK, explained the subsections of his brand's community that the collection drew inspiration from: trans women, creatives and illegal rave goers. The runway was graced by a radically diverse cast ranging in ages, skin colors, abilities and body types. Some of the models were also friends of the brand. (Art School jewelry designer Richard Porter took to the runway with his dog Orpheus.)​

Molly Goddard brought a much needed sense of optimism and joy with her cascading tulles and vibrant full-skirts, not to mention the lust-worthy padded bags that are sure to be next season's It-accessory. Another surprise was the unexpected collaboration with UGG, which came in the form of a trio of exaggerated platforms and playfully shaggy slippers set to release in March 2021. Her studio in East London served as the show's location, a fitting decision given the designer claimed "this collection is very much about my own personal style and the way that I like to wear clothes."

From the beautiful rose gardens of St Paul's Cathedral, Bora Aksu unveiled its womenswear collection steeped in historical and present-day references. As socially distanced attendees watched from quintessentially British park benches, a flow of models took to the runway, all of which were sporting mesh face coverings, the new accessory of our time. Inspired by the Influenza pandemic of 1918 as well as the glamour born out of the Gatsby era, the show told a story of history while providing a fitting nod to the current climate.

Plans for Victoria Beckham's show, which was set to be witnessed by a small crowd, were scrapped with the designer stating that it "didn't feel appropriate" (the UK had recently tightened restrictions only allowing for social gatherings of up to 6 people). However, this change did not quell the support of the Beckham clan who came out in style to support their matriarch, and observe the elongated trousers and fluid dresses accessorized with statement necklaces.

Design incubator Fashion East has been responsible for kickstarting the careers of the likes of Kim Jones and JW Anderson. With an array of alumnus boasting glowing careers, this is a show pegged for highlighting the breakout designers of our time and its show on Sunday did not fail to deliver. Nensi Dojaka, GOOMHEO, Saul Nash and Maximilian formed the 2020 cohort that showcased their Spring 2021 looks on Sunday evening.

Emerging British talent Bianca Saunders released her digital presentation on London Fashion Week's final day. The collection, which in part consisted of a collaboration with denim brand Wrangler, was presented in a playful video with a deeply socio-political message. Saunders provided a deconstruction of patriarchal masculinity all the while re-fashioning it to create five sub-categories for "The Ideal Man" film.

Among them were "Gangster pretending to be corporate" and "Man going to his first ball in heels" (the image of male models embracing heels was a profound part of the show). The designer also embedded this much needed social comment into the clothes themselves. For Saunders, it was about toying with shape and silhouette. "Breaking traditional menswear rules is central to my work," she told Hypebeast.