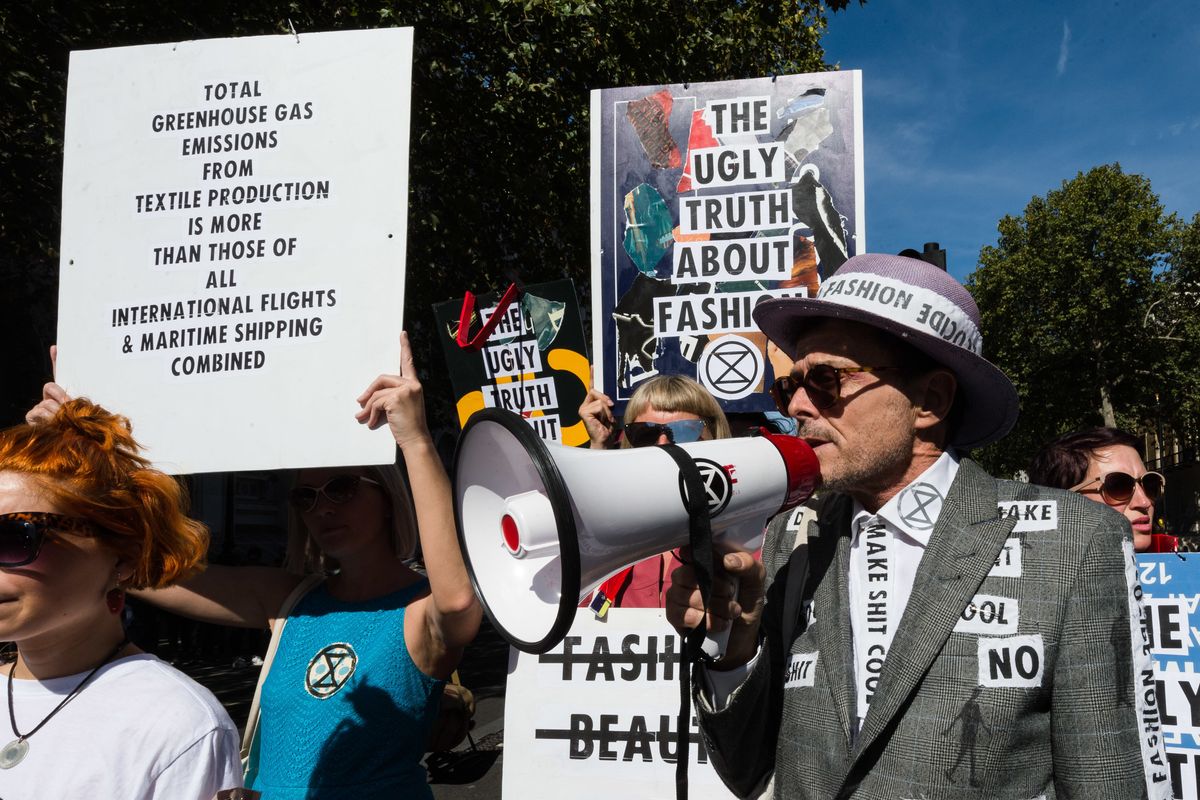 London Fashion Week Marked by a Funeral for the Earth

Despite the barrage of press releases I receive each day about this and that sustainable brand and this and that carbon neutral fashion show and so-and-so designer who is making "green" clothing (though the green clothes tend to mostly come in beige and dusty rose), there is simply no such thing as sustainable fashion. It doesn't exist! Upcycling comes close, but it is basically impossible to buy new clothing without leaving an enormous carbon footprint.

Enter Extinction Rebellion, a British climate change activist group that has staged protests, die-ins, and now a funeral procession throughout London Fashion Week. Earlier this summer, the group urged people to "boycott fashion" by refusing to buy clothing for a year. They also asked the British Fashion Council to cancel LFW altogether, and to hold a conference on climate change instead.

"During fashion month, the industry travels to global destinations to parade, see, and buy fashion, [and] it creates the desire that results in the consumption of fast fashion and beyond," reads a post on the group's Facebook page. "Fashion should be a cultural signifier of our times, and yet the industry still adheres to an archaic system of seasonal fashions, adding pressure to relentlessly create new fashion from new materials."

LFW went on as planned, but Extinction Rebellion made efforts to interrupt it. On the first day of London Fashion Week, September 15th, they staged a "die-in" outside LFW's central venue, 180 The Strand, with protestors dousing themselves in fake blood to symbolize the deaths that have and will come from climate change. Some even glued themselves to the door. And on Tuesday, the group staged a funeral procession, marching from Trafalgar Square to The Strand.

As CNN reports, the funeral was elaborate. The protestors dressed in full mourning garb and carried bouquets of white roses. Pallbearers held up coffins with slogans reading "OUR FUTURE." Marchers carried signs reading "LIFE OR DEATH" and "R.I.P. LFW."

Bel Jacobs, a former fashion editor who now works with Extinction Rebellion, told CNN that the funeral was organized to "mark a hopeful end to London Fashion Week," and to "lay to rest the toxic system that is destroying us all, and to mourn those who have already lost their lives and those still to lose their lives to the effects of climate change."

"The fact is that we have already produced enough clothing to last us all for the next 40 years and beyond — at considerable cost to our planet," she said. "We are hoping that people will look at what they already own and use it in new imaginative, creative and joyful ways."