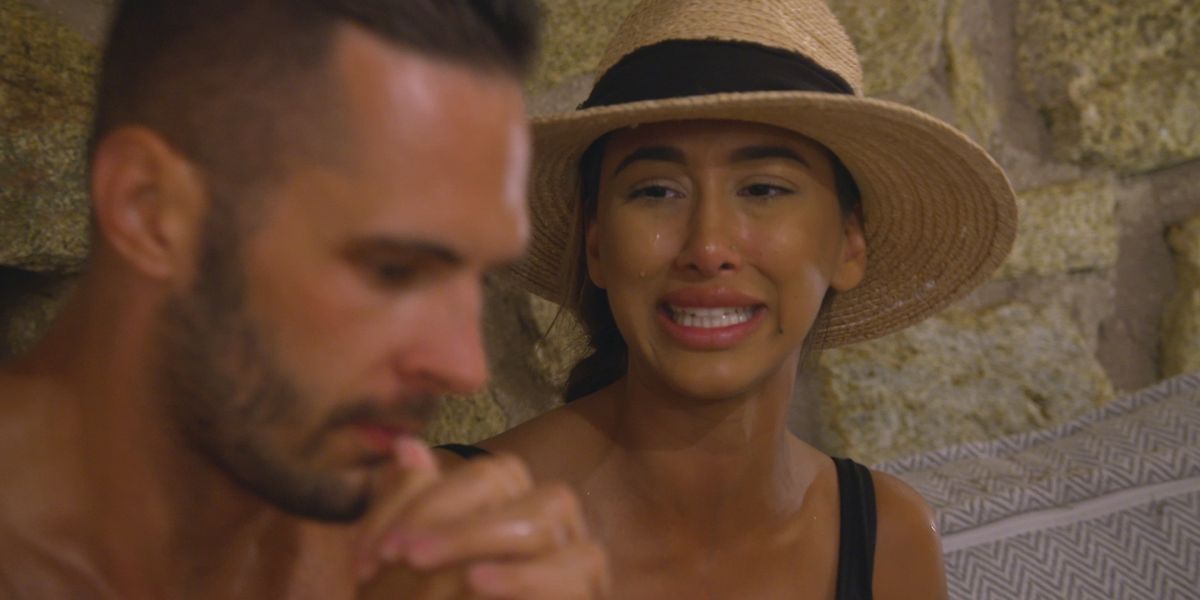 A confession: as of this week, MTV has started airing Lohan's Beach Club on Monday instead of Tuesday nights. Let's not think too hard about what that says about its ratings. This recap is being published on a Wednesday, and that's simply because I couldn't bring myself to watch this cursed show a day ahead of schedule. It is the opposite of relaxing Monday night viewing. It is actively stressful.

Anyway. I'm! Just a little bossy! Welcome to episode five. We open with flashbacks to the Jonitta/Gabi beef from last week. The mysterious Billy, who has never had a story line of his own and we seldom hear from, appears on camera and speculates they'll both be sent home. Panos refers to the beef as "the worst case scenario." Uh oh. But the final decision is up to Lindsay, who initiates a mediation session between the two girls. She puts on her special New Age calm voice, which is one of my favorites.

Jonitta tries to explain why she got so mad at Gabi. They were fighting over a boy, if you'll recall. Said boy never got a second of screen time, so no idea if he was worth it. "What happens if I bring someone to the house that I really like?" Jonitta asks.

"Well, this house is not about that," replies Lindsay coldly. "This house is about Lohan branding." I honestly just cannot believe what this show thinks it can get away with. Lohan branding! Why can't the house be about sex and alcohol and messiness? Are those not the three very essences of reality television? MTV has fallen so far.

But Lindsay still tries to be sympathetic. "Of all people, I know what it's like to be insecure, embarrassed, about doing something that I didn't mean to do in that second," she says wistfully, her eyes beginning to mist over. Lindsay's hard life! Lindsay's struggles! I tire of them.

"I don't want to send someone else home when you guys have so much potential," she says. (Potential to make money for the Lohan brand, that is. Also, "someone else"? As far as we know, no one has gone home yet. Will someone please put me in contact with the Lohan's Beach Club writing and or editing team? Just for a quick word.)

Jonitta apologizes to Gabi. She says she wants to spread love, like Lindsay does, which is why she looks up to Lindsay as a person. She talks about women empowering each other. Blah blah #Girlboss, feminism, beach clubs.

Panos, who is not a #Girlboss, just a ruthless businessman in opaque sunglasses, is still furious. He and Lindsay call a house meeting and tell all the hosts that their jobs are on the line. When are they not, though?

After deliberating, Lindsay says everyone gets to stay for now, and they all look pathetically grateful. Jonitta feels "blessed." Lindsay then namedrops Oprah (ultimate #Girlboss!), saying she has sought her advice for how to deal with the situation. Panos literally spits out his drink, heavily implying that he disbelieves the two are friends. If I had a drink, which would for sure make watching this shit easier, I would do the same.

Mykonos sun sets, Mykonos sun rises. It is the next day. Matt tells the camera about how Mai never does the dishes. Yes, correct: this episode will center on dishwashing drama.

But first, work. At the beach club, Panos reiterates that there will be no more second chances for the hosts. He partners Gabi and Jonitta together for today's task, to see if they can be professional. As in every episode, they'll be taking care of Lindsay's C-list "VIP" friends, in this case two actors called Terence and Jasmine.

Then Panos randomly drops the info that we are getting two more American hosts. I already struggle to name all the people on this show! Argh. It makes me so angry. Panos, Lindsay, and some random Greek extras would really be more than enough to carry 40 minutes of trashy TV per week.

Meanwhile, Jonitta starts bonding with Lindsay's friends, who seem sweet. They ask her to, um, search for seashells on the beach. They're really into seashells and want to take some home. Working at Lohan's Beach Club proves, once again, to be incredibly demeaning. Jonitta finds some old raggedy-looking oyster shells that are definitely just from the kitchen trash can, and they look pleased.

Back to the DISHES DRAMA. The house is staging an intervention, but Mai is resistant. Mike loses it. He starts shouting at her. She's shocked. "Because I'm quiet and don't really start drama, people think they can mess with me," she says. And then: "Growing up there was a time when my family had to live in a shelter." Right. Well, I guess Mike and Mai are enemies now. All the other hosts just watch cynically without saying anything. No one in the house really gives a shit about anyone else, which I actually quite like.

Sara and Brent, our star crossed lovers, are now together. When did that take place? The information just gets hurled at us, suddenly. They could have devoted a whole episode to how the romance happened, but I guess that wouldn't have been #Girlboss enough. "Coming home to someone who loves you is the best thing in the world," says Brent. Aw, Brent! "I really care about Sara, Sara is my queen," he adds. Remember when he called her ugly?

Back to the super high stakes Mai and Mike dishes drama. Everyone is taking Mike's side. Mai says she won't change who she is (a girl who does not do dishes by hand.) This is actually a very #Girlboss attitude!

Our two new hosts are now being introduced. Hurray. They are Kyle, a bartender from NYC who says "he's very good at branding" (perfect), and Kailah, a bartender from Las Vegas with black hair with a devious glint in her eye.

"Their looks strike me as very aggressive," Alex, who only joined the cast two episodes ago himself and is yet to prove particularly interesting, tells the camera. Everyone's freaking out a bit, now that they've got even more competition for Lindsay's affections.

Still, the gang show their new friends around the beach club. We see them doing breakfast shots together. Kailah says her first impressions include that Brent sucks. Good instincts. She's suspicious of his romance with Sara, too. She doesn't understand why anyone would get into a relationship instead of enjoying the Mykonos party scene.

A couple of cabanas over, Brent is being tempted by some "gorgeous" models. He says he'd sleep with all of them if he wasn't in a relationship. Sure, bud. Sara says she's uncomfortable, but she trusts him. Sara is a fool. Lindsay reiterates that she likes it when the hosts flirt with guests. It's good for business! So Brent starts giving one of the models a massage. Sara is livid.

Sara watching Brent and the models

We see Panos watching this dynamic from a distance, displeased.

Kailah is also watching, and gossiping with the other hosts. She thinks Brent and Sara are corny, and that their behavior will get them sent home.

In the next scene, Brent and Sara are fighting, because... I'm not sure why. It isn't explained! Now we're told that they've broken up! Once again, the show skips over any possible points of interest and just tells us that all the exciting stuff has already happened. Jonitta decides Brent needs to be punished, so she takes all of Brent's clothes out of the room he was sharing with Sara and puts them in the lounge. "Plot twist bitch," she says.

Brent predictably loses it. There's a lot of swearing. Jonitta threatens to start smacking Brent, an act which we know her to be capable of. The camera pans to Kailah, who is grinning. She loves this. She calls herself "the Regina George of the group." Mean Girls reference! That's a bingo.

Sara is crying, now. All the other hosts are smug because they knew this would happen. "They got into a relationship within a few days of knowing each other," says Aristotle, with an eye roll. Wait — this is episode five, though? As far as we, the innocent viewers, know, these people have been acquainted with each other for at least a few weeks. Jonitta's hairstyle has changed three times already.

The next day, our intruders Kailah and Kyle get together by the beach to gossip about their first impressions. Brent sucks, Sara is boring, Gabi is cool, and Kyle has a crush on her — he loves the pink hair. That's a fun pairing, actually.

As we close out the episode, Lindsay and Panos are having another worried meeting. Gotta say, Lindsay looks gorgeous! Her hair and makeup look is so nice here. Still, I am tired of the constant talk of firing and hiring. Who cares, honestly? They work at a beach bar. People buy drinks and swim. It doesn't matter. Truly.

A preview indicates that next episode will feature Gabi milking a goat. See you then.