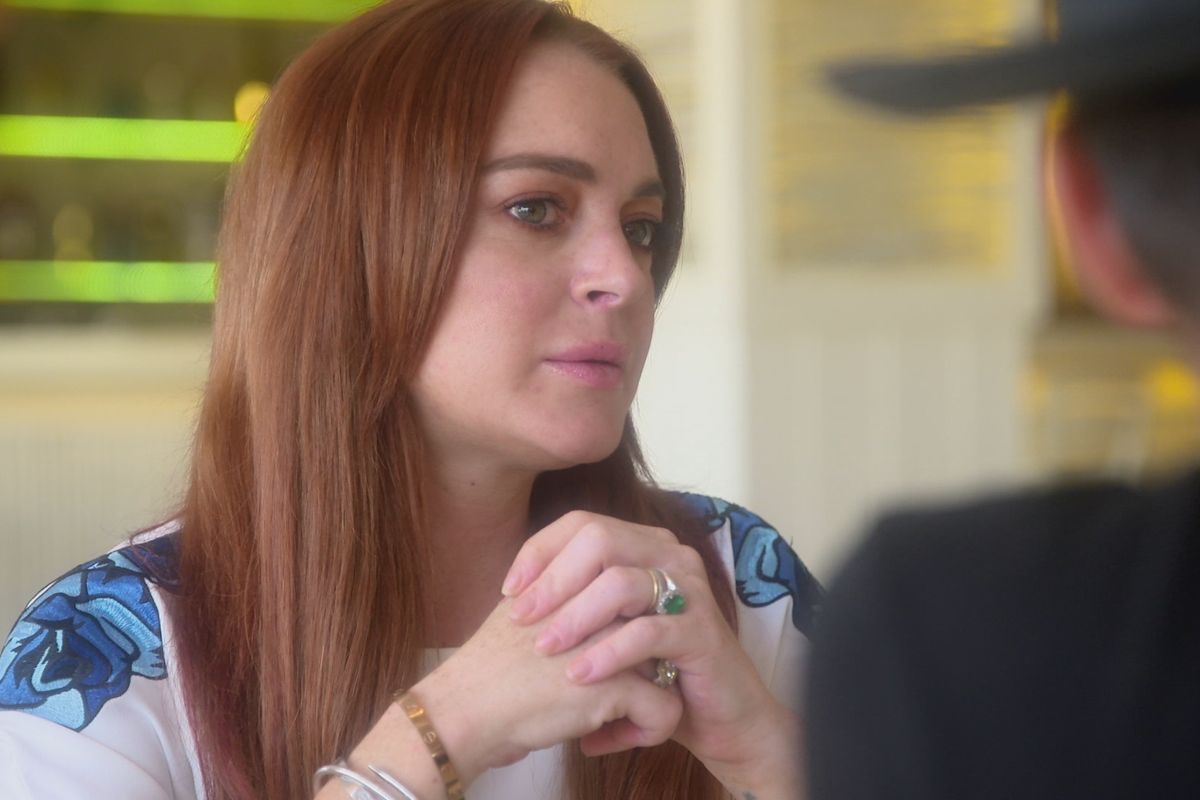 The Lohan brand has been on my mind more than usual this week. Lindsay's mom Dina made headlines when she casually revealed, on an episode of Celebrity Big Brother, that she is being catfished by a man in Los Angeles who refuses to get FaceTime. And I was haunted, too, by last week's episode of Lohan's Beach Club, in which Lindsay and her conniving business partner Panos unleashed fresh hell upon their employees who just came to Mykonos to have a good time and enjoy ten to fifteen minutes of fame/clearly had no idea what they were getting into.

Episode five saw Brent and Sara get together then immediately break up, and two new hosts enter the house. What's happening next? We open with Alex — the recent cast addition who used to work at a gay club with Mike — talking to his grandmother on the phone. She's Greek, apparently, and lives on the mainland. He's using his paid day off to go visit her, having received special permission from Panos and Lindsay, who suggest he bring some friends from the house along. Alex explains that his conservative grandmother doesn't know that he is gay.

Now we're at the morning meeting. Some VIP clients are coming, the hosts must take special care of them, blah blah. Exact same formula as previous episodes. Additional note: Jonitta's hair has changed back again, throwing the show's timeline into further question.

To the camera, Panos casually reveals that there are three hosts he'd "easily fire" at this point: Gabi, Jules, and May. You know, Panos has never taken to a single woman employee — he has only ever praised Brent, the alpha douche. Just saying. He says he's giving the three girls an "ultimate test," which is just looking after a VIP guest — the same tired challenge as always.

May, the spaciest cast member, has unfortunately been made leader of the trio. Jules and Gabi seem worried about this. Still, the three girls get together and work hard. Mai has cute club girl buns going on. Gabi still has pink hair. Jules is blonde and Midwestern America's Next Top Model contestant-looking.

The guest has requested macarons and sushi, but the kitchen doesn't have either. What to do? "It's so much," Mai says worriedly. But miraculously they go into town and find a macaron place — I guess the macaron trend has more than peaked at this point — and return to the club successful.

No real sign of Lindsay, yet. She's probably lying in bed reading Girlboss.

Now we're back on Alex's grandmother storyline. He's off to the mainland with Aristotle and... Gabi? Who seconds earlier was working at the beach club, ordering macarons and such? I guess the editors just gave up and decided to mash up several days, see if we'd notice. Aristotle and Gabi are supporting Alex, who explains it's too hard to tell his grandmother about his sexuality, due to how religious she is.

Now it is night time, and we're back at the house, somehow. I'm dizzy. I'm seasick. I'm expected to remember the names of all 45 hosts and keep track of what day it is? We do get a fun shot of Sara heavily contouring her face, Kimmy K-style. It's revealed that Lindsay is coming too. She describes this as an "ambush" because she "likes to test people."

Are they on the clock right now? Are they being paid? I need to know more specifics about the working conditions at Lohan's Beach Club. I need to speak with HR.

There's tension between Jules and Lindsay. Lindsay is clearly just threatened by how incredibly statuesque Jules is. "You just want to be a model, don't you?" she asks angrily. Jules has... never given any indication of this.

The hosts being intimidated by Lindsay

Everyone at the table is talking about how they don't want to be sent home, because they love working for Lindsay so much. And why wouldn't they? It seems awesome and not exploitative or terrifying at all.

Switching back to the Greek grandmother reunion. Gabi's hair has changed! It is now pastel rather than neon pink. I don't want to keep going on about continuity issues, but there simply isn't that much else to talk about. Anyway, Alex's grandmother is dope. She shows them around, we see some family photos. She offers the trio some homemade baklava, one of the world's greatest foods.

At the house, it is daytime again, and Jules is flirting with Mike. They continue to be "having fun" and "not being serious."

Well, that was a pointless ten-second scene. Now we're back on the mainland with Grandma. She's talking about baptism and how religious she is. Alex is nonetheless enjoying reconnecting with his roots, but due to being gay, he "can't be himself." Gabi, who is bisexual, tells the camera about how she has experienced similar struggles.

Back on Mykonos, Lindsay is going for a swim! And... pardoning a lobster? Yes, she just grabbed a lobster out of the kitchen fridge and is now throwing it into the ocean to "set it free." This symbolic act is followed by the saddest six seconds of camera footage I've ever seen: the lobster dropping like a stone, clearly dead, and Lindsay pretending not to notice. "Me saving lobsters, what do you think?" she asks the camera man. No reply. "The lobster was my Sebastian, and I'm Ariel," she adds. Then we get another shot of the motionless lobster. Oh...

Cut to Kailah, last episode's newcomer and a self-declared "Regina George," calling an all-in meeting with Panos. Wait! Are the LBC hosts finally unionizing? She says she feels like there are some serious "miscommunication issues" between staff and employees right now. This could not be more accurate. Then she starts talking about the drama happening back at the house, particularly between Brent and Sara.

"I don't understand why she's coming to me with this," says Panos.

"Better communication is what we're asking for," says Kailah.

And that's where things end. We learn that yet another boring VIP client is about to arrive. Due to this show's serious editing issues we never actually saw what the other one even looked like. Jules says she is excited to prove herself.

Brent greets the VIP client. She's wearing big sunglasses and what are likely Fashion Nova heels. Brent is immediately and understandably annoyed by her. She requests that he carry her around, "like a bride" and he does so, gently laying her down to recline in the cabana. Brent leaves in a huff. Then Sara and the client, whose name is also Sara, bond over their shared Muslim heritage. They both had strict upbringings. The client gives Sara motivational advice about how to break free from her past.

This woman has had exquisite plastic surgery, by the way — we're talking Bella Hadid, Kylie Jenner. She looks incredible. A nose sculpted by someone with serious skills.

Panos notices how Sara is bonding with Sara and approves. He tells her she's a "star." Rare praise for a female employee! She is pathetically grateful, and hopes "he will treat her better going forward." Good luck with that, honey. Panos turns on a dime. That's his whole thing.

Back to Alex's grandmother's village. On camera, Alex recalls his coming out story. He was 19, and says his parents were destroyed by it. His mom apparently "gained a lot of weight and went through a really dark time." Jesus. Okay.

"What my mom went through definitely plays a part in me not telling my grandmother I'm gay," he says. "She's going on 90 years old, was raised in a totally different era."

How old would you say this woman is?

Hold up. The woman I'm seeing on screen is 65, max. I'm sorry, but did they hire an actor to play Alex's grandmother? MTV, some answers, please.

Back at the club, Mike has been left to fend for himself, abandoned to look after yet another VIP by Jules and May. Uh oh. Panos has noticed, and he isn't happy.

On the mainland, Gabi, Aristotle, and Alex are meeting some local farm animals! Joyful footage of Gabi running around with a goat. Some of the first genuine smiles that we've seen in six episodes.

Alex decides against telling his grandmother anything, unfortunately robbing this episode of an emotional climax of any kind. On camera, he concludes that "you don't have to be out to everybody in your life to feel good about yourself."

At the club once more, Panos tells Lindsay they need to fire May and Jules, who are "a mess." This has been a constant threat since episode one, but will it actually happen? They call a meeting with just May. Lindsay looks sad. May sits down. Panos, ice cold as ever, describes her as "delusional" and "weak."

Wow, this is really happening! Lindsay does the actual firing, as she is the girlboss: "This isn't working. I'm sorry, I'm going to have to let you go."

May doesn't look shocked. On camera she confesses she's "sad" to "not have this opportunity anymore." But her face doesn't move much. I can only assume that she's secretly ecstatic to get the hell out of there, and maybe check out some Greek ruins before jetting back to the states.

Here's the great paradox of this show: good employees make bad television. May is a terrible host, but she is also one of the more recognizable personalities of Lohan's Beach Club, and several fun-ish storylines have revolved around her. Unfortunately, being interesting is a fireable offence. Only boring workers allowed.

I guess Jules gets to stay? We'll see. Until next week!