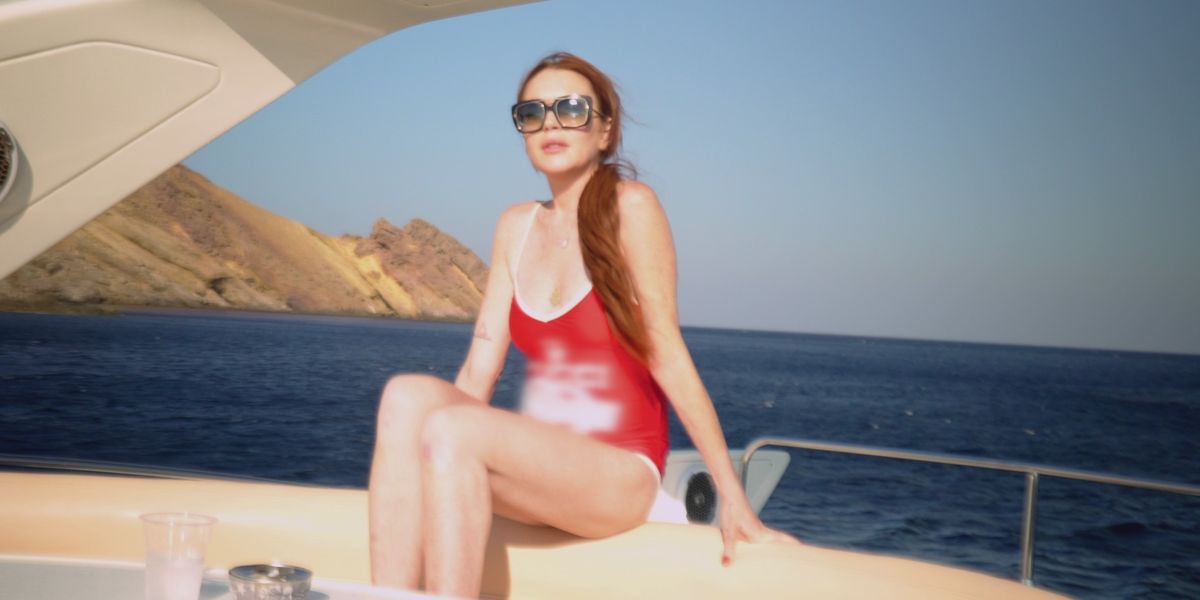 I'm so glad we made it. Look how far we've come, my Lohan's Beach Club babies. Soon, in fact at the end of this very episode, Lindsay will decide who is "worthy" of "continuing on with her brand." It's the season finale of the show that thinks it's Vanderpump Rules but more closely resembles one of those vivid, disturbing dreams you have after falling asleep drunk. She's finally here.

If you're not up to date, it was revealed a couple of weeks ago that Lindsay and Panos will choose four American hosts to move with them back to Athens and work at the Lohan nightclub there. Everyone else has to go home and, presumably, get therapy. Why anyone would want to win this prize — literally a minimum wage job at a bar run by two psychopaths who aren't even pretending they care about anything other than pleasing their investors — is beyond my comprehension.

The always lovable Mike got fired right at the end of last week's episode, after enraging Panos and Lindsay by taking off his clothes in front of some VIP guests: two obnoxious Geordie Shore cast members with deep spraytans and drinking problems. So we begin today's episode with him in front of the confessional camera, acting defensive: "I don't think it's anything worse than anything anyone else has done at this point." True enough. I've seen things happen on this ugly tourist beach that would make grown men cry, and in fact may very well have.

Panos and Lindsay come on screen to weigh in — Lindsay is wearing her silver red carpet gown again. They say what Mike did was "unacceptable." It's revealed that someone tagged the Beach Club on Instagram with footage of Mike's butt. I think that's pretty good publicity!

At the morning meeting with Panos, Mike's fellow hosts try and defend their friend. They argue, correctly, that Panos and Lindsay asked Mike to take care of the clients in whatever way he could — and frankly, those Geordie Shore people were more than happy for him to strip down and get sexual. Historically, hooking up with Beach Club clients has always been given the okay by Panos and Lindsay. They've encouraged it! From the male hosts in particular.

Panos just shuts the hosts down. Mike's gone. It makes no sense, but it's happening — that could be this show's official tagline. Everyone's sad, except Sara, who is a snake. In a presumable attempt to show her brand loyalty and win points, she tells Panos he's made the right choice. Yuck.

Mike goes back to the villa to pack his stuff. He remains unrepentant. "I'm used to getting my ass out at the club and getting rewarded for it," he tells the confessional camera. Well! There's a group hug, then a sepia-toned montage of Mike popping champagne and dancing on the sand. RIP.

A producer — MTV has, truly, given up — literally steps in and asks Panos and Lindsay whether they've yet made their decision about who will stay and go. There's desperation in her voice. No, it's more like resignation. This show was clearly a nightmare to work on, and I'd absolutely love to receive some anonymous tips about what went down on set. Email address is in my Twitter bio!

Lindsay and Panos just laugh and tell the beleaguered producer that they haven't made up their minds yet.

As we learned at the end of the last episode, the hosts don't have to work on their last day. Panos and Lindsay have gifted them a day of cabana relaxation at the club, which would have been sweet if not for the Mike thing. Everyone's still annoyed about that, but determined to make the most of the island while they have it. They all start doing shots. It looks to be maybe 8AM?

There's some B-roll of the blue haired DJ dancing. I'll miss her. Why did they never LET HER SPEAK? What's her story? Again: email address in my bio.

Everyone's decided to pretend they like each other for this final day on camera. Aristotle and Sara, who have never even shared screen time, I don't think, are making big declarations of friendship. As a fun prank or something, the boys take a bottle from the girls' cabana and give it to some random lady. The girls get angry, then Brent feels bad and decides to buy them a $500 vintage bottle of champagne to say sorry. Unfortunately, he wants to deliver said champagne atop Kyle's shoulders, which is apparently how they do things in Vegas. This causes conflict; there's no way Kyle wants to play literal second tier to Brent.

The 1942 bottle is now being OPENED and Kyle is ANGRY. I cannot believe this is the MOST DRAMATIC MOMENT THEY'RE GOING WITH, for the goddamn SEASON FINALE.

Still, the girls are touched by the gesture, as Lindsay watches from afar. She's wearing a bold lip today. Kyle goes off to stare at the ocean. After a day of drinking, everyone piles into the car to head back to the villa — but as the vehicle pulls up we see Kyle exit in anger, ready to start a fight. Physical fighting on this show! They love it. He punches Brent, who is trying to calmly walk away. A camera guy is forced to step in and separate them.

It's 9:30PM, the subtitles announce. Wait, when is the rose ceremony or whatever? Through a villa window, we see Lindsay lurking in the garden. She enters the house and a producer shows her a video of Kyle punching Brent. Going straight into mom mode, she locates Brent and firmly advises him to go cry in the shower for two hours. Yet another disturbing insight into her go-to coping mechanisms. Lindsay clearly gets off on being the responsible adult — that's been both an on ongoing theme on Lohan's Beach Club, and her most unconvincing acting performance yet.

After checking up on Brent, Lindsay swiftly fires Kyle. Well, bye. What's the point of going home right now, mere moments before an actual goodbye ceremony? It's unclear. He packs his bags, and everyone else heads to the big dinner, at a seafood restaurant. Panos is wearing a crisp white shirt, Lindsay giant gold hoops. We see her briefly hold a dead lobster again as she surveys the offerings. Good god.

As everyone sits to eat, Panos helpfully summarizes the situation: he and Lindsay are picking four people at the end of dinner, but they haven't fully decided who yet. So... that should make for a relaxing social scenario. "Today is very strange," Jonitta accurately deserves. Panos and Lindsay, in their usual oblivious way, don't seem to detect any tension.

Panos wants everyone to go around the table and talk about their favorite Mykonos moment, as though they've just enjoyed a relaxing vacation rather than the most difficult and humiliating month of their lives. I looked away for a second and now they're playing a montage of Brent and Sara's doomed romance. Sad slow club music plays.

Jonitta says her summer highlight was partying with DJ Alesso. I don't even remember that episode? Did it happen? May's favorite moment was Pride — that was definitely the season's biggest, perhaps only, highlight.

"This summer I've accomplished so many things," Lindsay reminisces. She enjoyed getting people from America and "showing them a different life."

"This summer has been amazing," adds Panos. Then, no joke: "I love torturing these guys." Why is he like this? Why would you admit that? I'm so deeply afraid of Panos. We see a montage of him firing people and telling them they're bad at their jobs. "I love it," he reiterates.

May, Alex, and Brent

Everyone dances on the table for a bit, and then we arrive at the moment of truth. There are envelopes, baby. Lindsay is handing them out with glee.

Jonitta gets the first envelope. I guess that makes sense. Her victory montage includes a shot of her offering a guest a drink and showing them to their cabana. It really wasn't brain surgery, huh?

Now Gabi gets one! She casually reveals that she "gave up school to be here, but it's worth it." Oh...

Jonitta and Gabi hug, even though they are enemies who once got into an actual fist fight.

Lindsay only has one envelope left. Earlier they said that four people, not three, would be chosen. Which completely ruins the next big dramatic moment, where Lindsay pretends she can't choose just one person, so rips an envelope in half. Brent and Aristotle both get to stay. Brent has been the protagonist of season one, so he makes sense. Aristotle didn't do anything interesting ever, but he is hot, and has a Greek name. It's enough!

This whole thing is confusing — we don't know if the show is even renewed yet, and it isn't clear whether Panos and Linds are picking these four people due to their virtues as employees, or reality TV cast members. Either way, the non-chosen people seem genuinely sad not to have been chosen, which is tragic.

Sara in particular is visibly upset. "Sara, she's beautiful, but she gives her power away to men," Lindsay explains to the camera, justifying her choice. "And I wouldn't be here today if I did that." This might be the moment I renounce feminism for good. Take the vote away from us, honestly. We don't deserve it.

"Sara and May were the weakest links," Lindsay tells Brent, who is looking very smug. "Yeah," he agrees.

Alex, the other cast member who isn't progressing through to the next ambiguous round, doesn't look too devastated. "The people you're rewarding right now?" he asks, of Lindsay's chosen four. "They're trash."

Back at the villa, all the hosts gather around for a final vodka shot. Smiling faces! They're excited to leave, and cannot even hide it at this point. Jonitta promises this won't be the last we see of her, and they all head to the airport.

Lindsay and Panos are still dancing back at the restaurant. We see them twisting and turning, eyes wide and excited, no doubt dreaming of future business expansions, then fade to credits.

Worst summer ever. See you... next season?