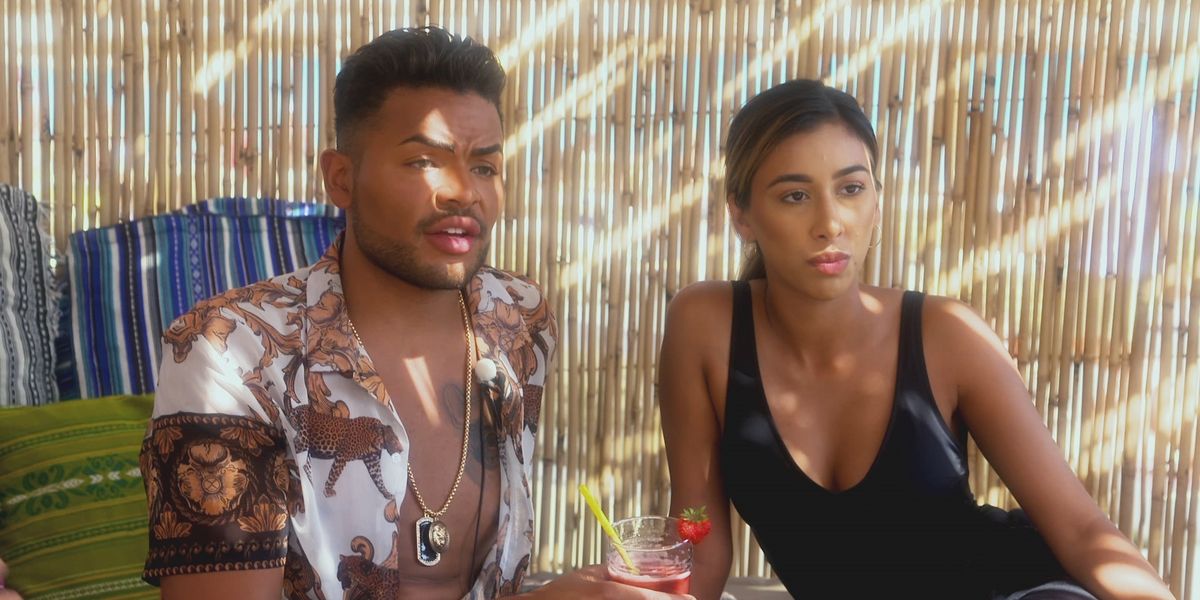 We've reached the penultimate episode of Lohan's Beach Club season one. Season two is unconfirmed and frankly, unlikely, but I just know that Lindsay will make it happen somehow, literally to spite me. Recall that last week Brent and Sara broke up for good, Sara hooked up with Billy in front of Brent, Brent cried, and Panos staged an unhelpful intervention. Also, the entire premise of the show casually changed — we learned that the VIP hosts have been in competition with each other this whole time, and that Lindsay and Panos will choose a couple of winners during next week's season finale. The winners will move to Athens with them to work at Lindsay's nightclub there. Everyone else will go home.

Things kick off with Panos telling everyone that he received a phone call from the producers of Geordie Shore, an actually-popular reality TV show that's a far cry from this vodka-smelling MTV mess. Cue a montage of Geordie Shore clips. British accents! Fake tans! The Lohan's Beach Club crew should have gone harder with the fake tans. Panos says he is a "huge fan" of Geordie and is excited at the prospect of two cast members visiting Lohan's Beach Club tomorrow. Seems like short notice? None of the Americans have heard of Geordie Shore, but they try and get excited about it anyway.

Lindsay appears on screen, also excited about the Geordie cast visit, because the show is so popular with Europeans. She loves Europeans. She clearly doesn't know much about the show either, but observes that "these kids are wild, from what I've seen."

The two Geordie Shore cast members are called Nathan and Sophie. They have large social media followings, and Panos hopes they'll post about the club. Really does seem like desperate times over there in Mykonos.

Meanwhile, Brent is still sad. Kyle is trying to comfort him. This is generous. As has been noted, I have a soft spot for Brent, but he hasn't ever been particularly nice to Kyle or anyone else. The boys decide to take Brent out clubbing so he can forget his troubles. We see them pile into taxi as Brent casually ponders, "I wonder how much hookers cost in Greece?"

There's a long montage of clubbing footage. Everyone looks like they're having an at least semi-okay time. As I've noted previously, MTV is now clearly cognizant of the fact it is boring to watch these people do their jobs — there are only so many shots of Gabi handing an Instagram influencer a cocktail that the average viewer can take. So this pivot to partying that's occurred over the past few episodes is a smart move. Easy, watchable, drunken drama. For example: now Billy is hooking up with a random woman who isn't Sara. Uh oh. She's not around to see it happen.

It's the next day, suddenly, and Billy is instantly remorseful. He resolves to tell Sara about the hookup before anyone else does, and everyone heads to the usual morning meeting.

At said meeting, Panos emphasizes that the Geordie Shore guests are "huge party animals" and "crazy." The American hosts will have to bring the heat. "Nathan wants to be greeted by a straight guy and a gay guy, that's his request," Panos adds. "I'm both," volunteers Mike, who is famously bi, and very, very into talking about that fact.

Panos is like, "Ha, ha, no." He wants Aristotle and Alex to do it. It's then revealed that Sophie, the other Geordie cast member, "isn't into bi guys," which makes Mike angry. "She should be so lucky," he says. He takes the whole thing as a challenge: he will hook up with this random British woman. I don't love where this is going.

Panos also explains that tomorrow night he and Lindsay will HAND OUT ENVELOPES to those who'll get to keep working for them. Once again: up until last week we had no idea that this show was even a competition. And now that we know it is, I'd like to observe that working for Lindsay Lohan is the worst reality TV show prize ever. How about a car or some money or a restraining order instead?

Well, back to the Billy-Sara drama. Gabi, who is in with the boys, just accidentally revealed Billy's secret to Jonitta. Uh oh. Jonitta is a notorious gossip, so this news is going to spread fast. She's also really close with Sara. "Was the girl cute at least?" Jonitta asks Brent. They're strolling through a supermarket for unexplained reasons. "No! She looks like this," he says, holding up a package of raw meat.

At the Beach Club, Nathan and Sophie from Geordie Shore arrive wearing hideous bathing suits. Lindsay briefly appears, holding a lobster. A throwback to her deranged crustacean pardoning ceremony from a few episodes ago — thankfully, the camera pans away quickly.

A few cabanas away, Billy is preparing to tell Sara the truth. He takes her aside: "I ended up kissing a girl as a joke with Aristotle... alcohol was flowing, I know it's not an excuse." Sara remains calm. "Was Brent there?" she asks. "He probably loved it." Indeed! Brent is a child.

Back to Geordie Shore. Mike is flirting with Sophie. He is not coming off as super straight, to be honest, but she is enjoying it either way. Meanwhile Panos, who is in an unusually good mood this episode, takes Billy aside to talk about his girl troubles. He's concerned about what all this means for the business, obviously. He worries what Lindsay will think.

May I just say: the Geordie Shore people are terrifying. They keep expressing the desire to "get smashed off their tits." Mike is up for the challenge: we see him doing body shots off Sophie, then they start making out. It is, as usual, unclear whether this sort of behavior is allowed or expected of the VIP hosts.

Now Panos and Lindsay are cruising around in a convertible Mini. They're having a big chat about who gets to stay. Lindsay wants to keep everyone but she cannot. There is pain in her eyes!

Oh. Mike has taken his pants off. Yes, he is flashing his penis and butt. His fellow hosts are not okay with it; for the Geordie Shore cast members, it's clearly just another day at the office. I can see why the rest of Europe isn't too upset about Brexit, you know? A security guard comes over to escort Mike away, then gets on the phone to Lindsay and Panos, who start speaking Greek to him. There should be more Greek on this show! Hmm, Mike definitely isn't getting an envelope.

I SWEAR TO GOD I just saw some b-roll of a stray cat vomiting. I would not lie to you. The cat was vomiting and then I think eating some of its own vomit?

Sara comes home to roses in her room. They're from an apologetic Billy. She starts crying and reflecting on how bad her entire summer has been. Distressing.

It's announced that Nathan and Sophie from Geordie are coming around to the host's villa for dinner, which is sweet? Everyone can bond about being on reality TV and hating themselves. Nathan and Sophie are super late, though, so Sara and Brent take the opportunity to have a surprisingly mature talk. "I fell in love with you," Sara admits, hoping that Brent wasn't too hurt over the fact she started seeing Billy so quickly after their break up. Brent is forgiving — but they're not getting back together, thank God. They agree to be friends.

Nathan and Sophie finally arrive, a rude two hours late. Sophie immediately says Gabi's homemade risotto looks "like period discharge," and she looks genuinely hurt, which is fair. "Is this the real food you're going to make us eat?" asks Nathan with gleeful obnoxiousness. Sophie grabs someone's bed sheets and declares her intention to rub her vagina on them. A lot is happening right now.

Nathan and Sophie from Geordie Shore

Brent almost decides to start a fight, but then he thinks better of it and lets them be. It's called personal growth. Nathan and Brent sit together and talk about their families back home — Nathan clearly thinks Brent is an idiot and dismisses everything he says. He seems very bored. I wonder what his appearance fee was for this episode?

It's the next day. The very last day! Panos is in a very good mood! "You can all be really be successful in this business if you want to," he tells the group. "Even you, May." That wasn't said as a joke — he really is that cold.

Everyone thought they were going to have to work, but for the last day, Panos cutely announces, the hosts get to relax in the cabanas and have the other (never on camera) LBC staff attend to them. He is being so nice in this episode! It's freaking me out! Everyone is so excited and happy. They're gonna get to do their favorite thing: get drunk on the beach!

Except... oh. Panos just straight up fired Mike for the nudity incident, in front of everyone. He went from smiling to angry in the space of a millisecond, in his usual way. We see Mike's outraged face, then the credits roll. See you next week.