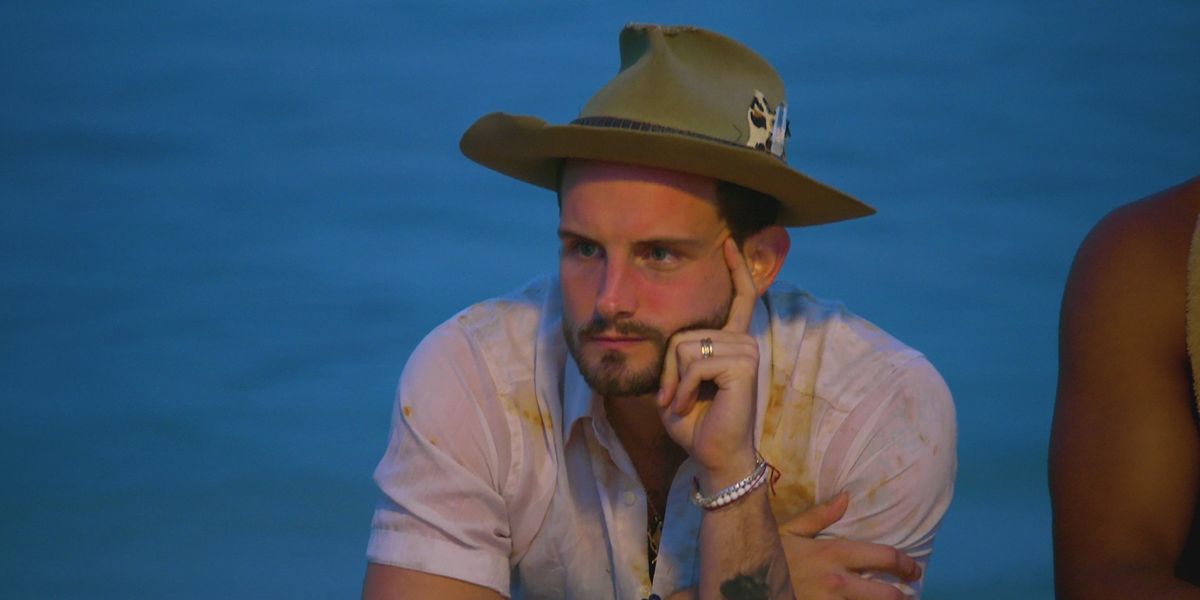 Welcome back, fellow masochists. During last week's episode of Lohan's Beach Club, which was Pride-themed, we experienced some rare moments of joy as Lindsay and the VIP hosts partied together to vintage Lohan bops on the beach. Also, the point was hammered home once more that not a single person on the show is comfortable in their sexuality.

So what can we expect from today's episode? Mainly that it will feature Lindsay Lohan's longtime friend Nico Tortorella, who you likely know as the cute tattoo artist from Younger. Fun.

We open with May and Jonitta gossiping in the kitchen; May says she saw Gabi and Kyle hooking up last night. Cut to seedy black and white footage of the two moving around under some sheets. Classy! The rumor spreads quickly, and Brent is loving it. "Hopefully this will take some heat off me and Sara, and Panos and Lindsay won't be so critical of our relationship," he hopes.

Apparently today's Beach Club celebrations are... Egyptian themed? This is announced very casually. There will be a full moon-themed party of some kind later on. The hosts are wearing ugly yellow and black outfits.

At the morning meeting, everyone reflects on the Pride party. It went well, they all agree. "BUT JUST REMEMBER," Panos says, with sudden aggression. "SOON LINDSAY AND I WILL DECIDE WHO IS GOING TO CONTINUE WITH THE LOHAN BRAND. WE DON'T HAVE ROOM FOR EVERYBODY."

Panos then tells them about Tortorella, saying he is "like a BFF, family" to Lindsay. "I'm sure some of you know him," he says encouragingly, passing around physical photos of the actor, while everyone looks blank. Oh, sad. They should watch Younger, it's surprisingly good! Kind of wish I was watching it right now, actually!

"He was engaged to Lindsay, and they're still friends," explains Panos, referring to a jokey drunken photo Lohan posted on Instagram in 2013. Panos makes it clear that everyone needs to impress Nico if they want, for whatever twisted reason, to stay on the island. He also makes it clear that he's not down with the Egyptian party: "I don't give a shit about the moon, I don't know what Lindsay wants, so you guys take care of this."

May, who is as usual concerningly dead behind the eyes, is excited. She says she "used to be spiritual" and "used to keep little stones by her bed."

Nico arrives, wearing a jaunty hat. Panos explains once again that he and Lindsay were engaged. I'm pretty sure they weren't! Like, I'm 100 percent sure. Anyway.

Nico settles into a cabana, and Lindsay finally arrives on set. She also refers to their former engagement. But now they're "more like brother and sister." She then goes on one of her distressing rants about not having many friends, because they've all betrayed her trust.

"You're wearing a pearl in your ear," she observes, when greeting Nico. "Why?"

Elsewhere at the Beach Club, Aristotle is suddenly talking about how he has a crush on a coworker who we have never met. This is the first ever indication that other, non-MTV people work at the Beach Club. Doesn't seem necessary — the place really isn't that big, after all, and from what I've observed there aren't many customers. Ugh, how many more characters can this show possibly add?

Brent starts teasing Aristotle about his crush and trying to embarrass him in front of her. Brent! Your toxic masculinity! We talked about this.

"I'm just so tired of his bullshit," Aristotle tells the camera. That's fair.

Beach-themed B-roll rolls for like half an hour, then Aristotle tells some of the other hosts how frustrated he is with Brent. Kyle agrees that Brent is "a dick" who is obsessed with the limelight. "It's good to hear we're all on the same page," he says.

Back to Nico and Lindsay's tête-à-tête. "How's life right now?" Nico asks. "Are you dating anyone?" Great question. Unfortunately, he didn't get the memo that this is a boring show about business and money, not parties or dating. "I have no time," Lindsay replies. She's too busy firing people for no real reason. Lindsay expresses her hope that Nico can teach the VIP hosts a better work ethic. Alex and Mike appear at the cabana, and Nico waves around one of those sage smudge sticks at Alex. He doesn't even pretend to be into it.

Now it is night, and all the hosts are sitting in a circle with Nico, telling him their highs and lows of the summer so far. He is counselling them, sort of.

Kyle unsubtly says his low is Brent, who immediately retaliates. "I think he's jealous of me and where I'm at with my career," he tells the camera. "This younger guy, of course he's jealous."

It's Sara's turn next. "A low for me would be not being able to be myself," she says. "It takes a while for me to open up. And a high would be finding love."

"I don't mean to throw shade, buuuut," says Mike. Nico perks up immediately. Mike, too, starts complaining about Brent. Everyone else starts openly bullying Brent too. Brent, who I'm sure will cry about this later, brushes them off.

Panos creepily appears. "Who are we sacrificing?" he asks, to no answer, then disappears from view.

Everyone writes their lists, then burns them on the beach. Symbolism! This is definitely better than a normal episode, where we have to watch them serve drinks, but it is still not exactly what I'd call entertaining.

Fireworks go off and everyone howls at the moon. The "party" never happens, or if it does we never see it. You get the sinking feeling that Lohan's Beach Club simply couldn't draw the crowds.

Meanwhile, girlboss Lindsay is getting a massage with Nico Tortorella. They're about to do some light cryotherapy together. That's when you freeze your entire body on purpose. Lindsay explains this is because "when I got bit by a mosquito in Bora Bora I got this bone eating virus that creates early arthritis, and cryotherapy really helps me."

It is morning, suddenly. The hosts have a day off, but it's one of those fake days off, where they have to spend their free time promoting the club to random people in Mykonos. They're throwing a party at the house and inviting some locals. We see them handing out flyers on the street. It's so sad. Unionize! Jonitta tries to invite a hot guy who turns out to be gay.

Nico is a good friend

We never see Lindsay actually do any cryotherapy, but Nico bravely steps into the chamber. "I don't think Nico needed to do it, but I thought it would be funny to make him do it. It's fun to torture someone you love," Lindsay explains with a smile. We see Nico's face glaze over in pain as the icy mist encases him.

Back at the host house, the promotional party is happening. Nico arrives, and everyone's excited, pouring shots. But they're also worried that he will tell on them to Lindsay.

"How much longer?" he asks. "Not much," Lindsay smiles.

A few guests are arriving, although not many. Two of Brent's friends from home are here, and we are not told their names. "Are these his only friends, in life, that he has?" wonders Jonitta. Brent ignores Sara as he excitedly attends to the friends, making her upset.

"I heard a rumor today that Gabi gave you head in the bathroom," Brent tells Mike, suddenly. Oh. Buddy. No. Mike is understandably annoyed by this invasive comment. It was May who started the rumor, but it's crazy that Brent would bring it up so openly and awkwardly.

Mike and Nico are having a big sexuality talk. Nico is pansexual, and Mike is bi. They're relating to each other so hard. You think they're just going to keep chatting about how judgmental society is of queer relationships, but then there's a big dark reveal: Mike casually drops the fact he was "blackmailed into prostitution" at 14 years old. He apparently wants to write a book called "My Life As A 14-year-old Hoe." Just when you thought Lohan's Beach Club couldn't fit another tragic life story into the mix, someone comes through with the goods.

"It's okay to grieve those times," says Nico, fairly unhelpfully. Mike says he has never opened up to anyone about this before. Wow. How did they cast all these broken souls in one show? Incredible.

Gabi and Nico listening to Mike

"I'm living with people who don't get me," Brent is telling his friends from home. Meanwhile the other hosts are annoyed that he still hasn't even introduced said friends to Sara. "Why don't you go downstairs and introduce them to wifey?" Billy asks Brent.

One of Brent's friends — we won't ever learn their names, I guess — laughs. "I don't think she'll still be wifey when he heads back home," she says, cruelly. The hosts seem shocked by this — Brent has always seemed very into Sara. Way too into her, really.

"Learn how to treat a girl," Billy angrily tells the camera. If you'll recall, Billy once had a crush on Sara of his own.

Jonitta decides to tell Sara what Brent's friend said about her, and Billy confirms it. "From what I heard, this is a Mykonos thing," he says. This being the relationship. Sara remains calm. "I think we're pretty much over," she says.

Billy! Don't act like you don't have a motive here. Luckily, Jonitta sees through it. "Be a shoulder to cry on, not a dick to ride on," she says. Nevertheless, Sara and Billy start flirting a little, as Brent continues to focus on his friends.

It is finally the next day, and the other male hosts have called a meeting with Panos to complain about Brent's behavior. "He's a bully," they say. Panos is concerned. This could affect his bottom line, after all.

Lindsay appears on camera. "I've never seen guys be so bitchy," she observes. "It's like Mean Guys, not Mean Girls."

Well, at least no one got fired.