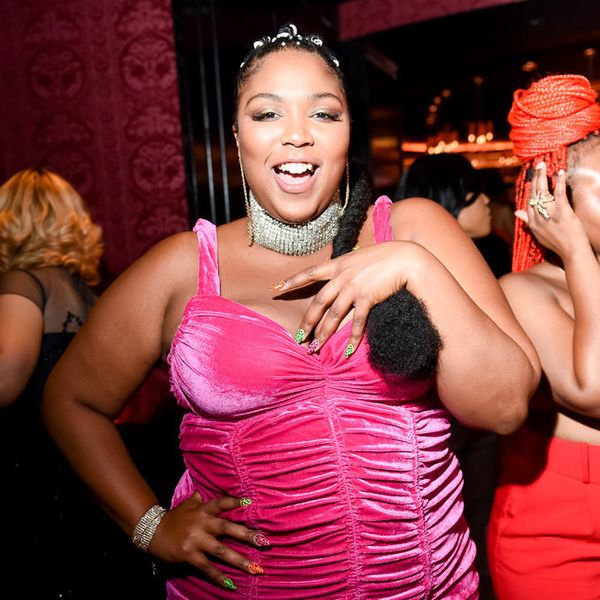 Lizzo Wants to Be 'the First Fat Playboy Bunny'

Jeremy Scott's riotous after-parties are always packed to the gills, clubs teeming with pop stars, models, and miscellaneous nightlife careerists. This season, the crowd was more of a crush — everyone was fighting to get in the room with celebrities like Cardi B, who arrived with the designer and her sister, Hennessy Carolina. Quavo was there too, as were Paris Jackson, Tiffany Haddish, Kali Uchis, Dove Cameron, Saweetie, Amanda Lepore, Pose's MJ Rodriguez, Sita Abellan, models Duckie Thot, Dilone, Teddy Quinlivan, and Salem Mitchell, and Kim Petras, who cutely danced onstage as DJ collective The Misshapes played her own hit, "Heart to Break."

"I love being around the positive energy [Scott] brings into the fashion space," superstar YouTuber Gigi Gorgeous told me. Clearly she was not alone. People with uniformly well-highlighted cheekbones in bright clothes were spilling out of every corner. There were a lot of hats. My favorites included a pink furry cowboy number worn by a friend of legally embattled influencers the Clermont Twins, and a miniature neon yellow cow print ten-gallon (a cup? a pint?), pinned to the top of an up-do.

But maybe this is all burying the lede a bit, because this party for Scott's #Resist-themed collection also served as the opener for New York's new Playboy Club on 42nd Street, a sumptuously appointed private club that harkens back to the original 1960s versions. As in, the waitresses are bunnies, complete with ears, tails, and corsets. I asked several staffers if their one-piece outfits gave them wedgies, and was given unanimous no's. Apparently the costumes are extremely well-constructed. They all looked amazing, like time capsules with legs.

Playboy bunny stuff is fun and sexuality is cool, and so I thought it would be rude to ask if they'd read Gloria Steinem's 1963 Playboy Club exposé, "A Bunny's Tale." The bunnies the New York Times interviewed for a piece yesterday on the club's opening had, but found it outdated. We are, after all, in the fourth wave. Or does sexy stuff go in third? I get confused.

Lizzo, gorgeous in a pink velvet ruched dress and sparkling choker — a look she described as "Madonna-inspired, pink marshmallow diamond pillow fuck me" — was here for the bunnies. "I want to be a Playboy bunny so let's fucking go!" she laughed. "I want to be the first fat Playboy bunny. Besides Anna Nicole. Rest in peace."