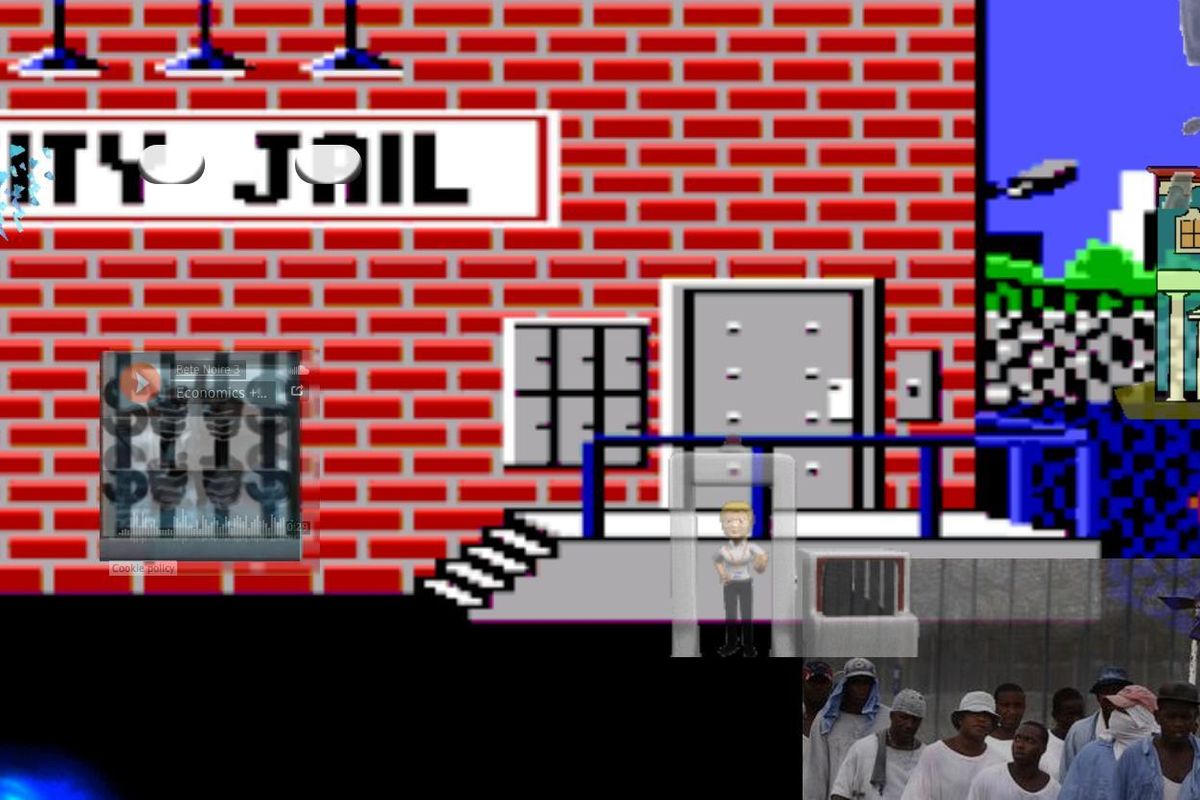 Our friends at NewHive are currently in the midst of a two-week-long series of commissioned artworks exploring privacy, surveillance and prison reform, and in conjunction, we'll be running a series of accompanying interviews, features and essays by the featured artists. The third installment of this series comes in the form of an interview with artist Liz Mputu about their interactive web browser called Broken Windows.

Artist Elizabeth Mputu is one of many virtual vessels of radical femme consciousness spiraling into control within the parameters of the digital realm, swallowing up what data comes into their path and spitting out whatever indigestible truths come out. Black African. Queer. Unapologetically Thotful and Reclusive.

Mputu's Broken Windows is an interactive web browser piece that transports the viewer into new insights via the the mystical alliance of digital guides. These guides, or 'windows,' appear in the form of varying 'clickable' objects positioned throughout different sets presented on the screen. The worlds explored include the realities of a police state that has weaponized surveillance, as well as the reactions of a public that rebels against it. Broken Windows provides a look into how these groups of people are then subject to further violence that can at times be lethal on both ends, including the police raids and the civil riots that challenge those tactics.

We spoke with Elizabeth about police brutality, the surveillance matrix, and the role of the mystic in art and activism.

What are some of the various ways in which we can understand the title Broken Windows and how does the idea of broken windows function in this piece?

Broken windows serves as a reference to a police raid at a gay bar in the 80s as well as a term used to describe a criminological policy that developed at the same time, which highlights this philosophy behind aspects of the U.S. punishment culture. I use these as frameworks for my piece to show which lens I'll be using to speak on the issues, with what histories I connect to that have served to expose faults in our society's ways of coping with crime. Also, whose perspectives have aided in the gradual dismantling of these outdated methodologies despite arguments around the legitimacy and worth of our identities. Upon being asked to make work on the subject of prison reform and police brutality I learned about the raid at Blue's in '82 which is where I started with this piece. You can learn more about that through certain shards of glass that are interactive on the main page of the project.

Broken windows is also a code for portal, and asks us to take a look at what it means to gain access to new insights through contexts where a broken window is part of the setting.

Can you identify some of the objects throughout the piece and their meanings to you?

The hyperlinked objects in the piece that are that are most meaningful to me are the rosemary in the remembrance portal because rosemary is an herb that's used to aid memory and that portal talks about the importance of preserving memories as an ethical obligation in political movements that aim to eradicate violence against particular groups of people who are subject to grief on a more regular basis than others but who receive warped or no media coverage for their loss.

There's also audio in the 'heart of the issue' portal masked as sacred items on an altar that quotes a point of view on prison abolition and how we need to collectively eradicate the need for such an institution from our mind first that Angela Davis makes and the power behind her position absolutely thrills me every time I hear it.

So those are a few things.

How does the mystic play a role in your own art and activism?

I'm in constant telepathic conversation with my ancestors and the universe when it comes to making decisions that i feel impact our society's past and future epigenetically however, I think to paint my work as activism -- albeit the honor, takes away from the organizers who are out there jeopardizing their lives and safety to bring about change in riskier, more direct ways. Darren Seals, a Black Lives Matter activist, was found killed and burned in his car earlier this month. Before that, Hande Kader, a Turkish trans activist and sex worker, was brutally killed also -- she was 22. I have the privilege of sharing these truths from my computer screen through the lens of art and that is important to acknowledge. I'm bringing awareness to my audience-- yes, but to be an activist I believe you must do more than just know what's happening, you have to act and be present where the change is taking place. In policy and in protest.

With that said though, to answer your question, I feel that because in my regular life I consult spirit guides from within my family, and from my culture's pre-colonial religion of the Mpungos on the daily it makes it easy for the guides to show up through my art whether I'm channeling and embodying them or hinting at their usefulness by mirroring their instructiveness and ability to draw my attention to the little things into the art work as well. Mysticism is important to my practice because I've inherited the sincerity of it's relevance by challenging my Congolese American upbringing, and honoring what the Congolese side of me has to offer as far as spiritual guidance.

What is the surveillance matrix?

The surveillance matrix is comprised of Facebook check-ins, Instagram tags of our locations, Google selling me products based on keywords lifted from my mind, sending a pin drop to your best friend so they know where you're at if a fuckbody is giving you trouble, and covering your laptop camera with a sticker. It's taking a selfie of your image in the surveillance footage on the TV at a 7/11 and Snapchatting it.

How would you say surveillance culture can be positive and how can it be dangerous?

Surveillance culture can be positive because due to it we as citizen journalists can sometimes use evidence we've acquired ourselves to indict corrupt officers for their fatal behavior. Surveillance culture is positive because you can send your sick friend in Oslo well wishes when they post they've caught the flu. We can check in with and for one another during tragedy. And you can find someone to hook up with or give false hope to near you in a matter of moments with different location centered dating apps. Surveillance culture is negative because it's been birthed out of the fear and paranoia that comes with the illusion of being alone so we're experiencing it in hyper drive and at times holding ourselves prisoner to the need to overshare which then gets exploited for corporate financial gain or by people who just don't care about us and use our own documented activity against us. We are now all subject to being harassed online by total strangers if they so please and i'm less interested in that portion of the culture.


for profit by Elizabeth Mputu

What do you find most powerful about the Internet in 2016? The most difficult?

The most powerful thing i find about the internet in 2016 is our growing ability to creatively relay emotion and feeling to one another over this intangible plane of existence. We're starting to pick up on each other's virtual body language and that's dope to witness. How many of us are going to immediately ask "is everything alright?" If someone hits you with a "K." text response. I think that's very powerful and believe that having to adapt to paying attention to such nuances without the hefty physicality of those interactions is training our psychic sensibilities. The most difficult thing I've found is defining what solidarity means among these very large, stretched out networks and how to apply that practice when navigating and creating online spaces.

What's the last piece of art that moved you?

The last piece of art that moved me was a film called Viva about a Cuban drag queen whose alcoholic father returns home from prison because he's sick. In the film the main character Hector has to take care of his dying father while his father comes to terms with the fact that Hector is a talented entertainer, selfless individual, patient caretaker and beautiful woman. I cried and was so moved by it because the struggle of being accepted by your parents as a queer person is so real. I watched it on the plane with my mother next to me and was a glass of straight whiskey in. My mother was disappointed by my behavior but every heart string was pulled and I was a complete mess.