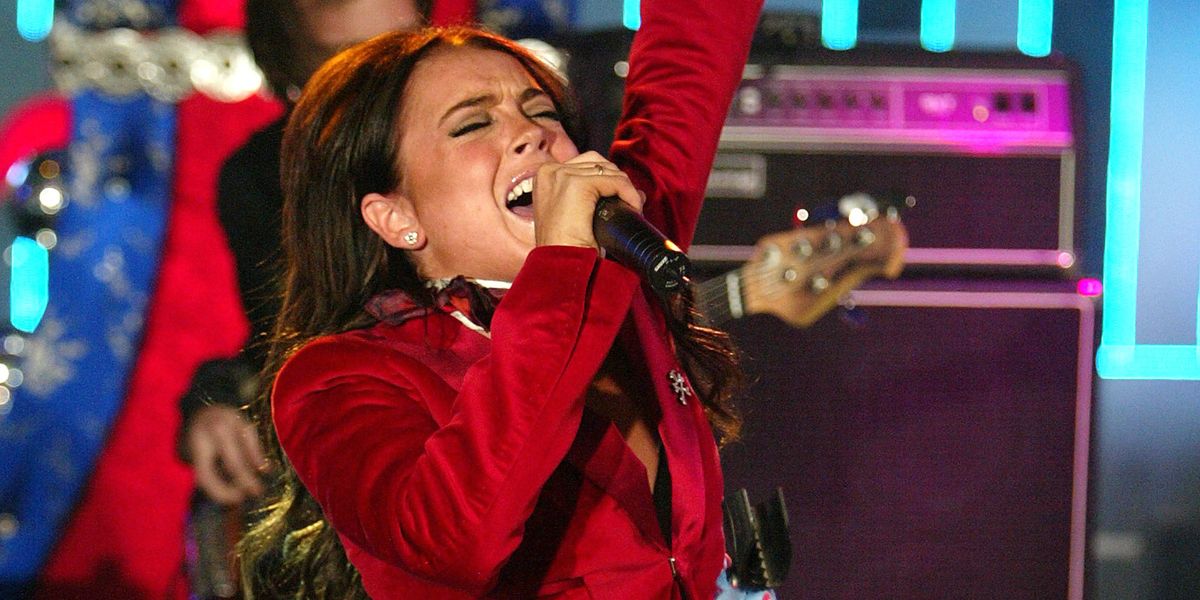 Lindsay Lohan was once the next Pat Benatar.

On her debut album Speak, she gave us gorgeously surface level teenage angst, fiercely addressed the tabloids, and covered her album in skulls, electric guitars, and french script, because rebel. And on her sophomore album, A Little More Personal (RAW), a newly blonde Lohan reflected on her childhood, sang about falling into black holes, and even covered Steve Nicks, because serious, adult actress-turned-musician.

Things were going great! I, personally, bought both LPs on iTunes and as physical CDs! I watched "Confessions of a Broken Heart (Daughter to Father)" religiously on AOL when my parents were asleep! I studied on the ways Lohan's tumultuous life reflected my own middle school fury! When I thought I was straight, I wanted to kiss her! When I realized I was queer, I wanted to be her!

Then years went by with no new Lindsay Lohan music, whatsoever. These were tough times for us all, to say the very least. But in 2008 the troubled TMZ icon surprise dropped a one-off single called "Bossy," teasing a drastic shift from her darker, guitar-driven sounds into synthesized clubby bops. Gay agenda!

The track was oddly produced, written, and originally sung by Ne-Yo (you can enjoy that gem of a demo, here), and saw Lohan telling the world who's boss: "I like it how I like it, when I like it, and that's how it is." Had we been listening closer, we would've realized she was then foreshadowing her final form as a bar-dancing Mykonos mogul.

Strange enough, none of these tracks have landed in the ranking of Lindsay Lohan's favorite Lindsay Lohan song of all time — not "Rumors," not "Edge of Seventeen," not even "Bossy." When Watch What Happens Live host Andy Cohen asked the now 32-year-old PAPER cover star which musical contribution from her discography is her number one, Lohan named an unreleased demo, "Walka Not a Talka," which originally leaked onto the Internet a decade ago.

The track was once rumored to be a follow-up single after "Bossy," lifted from a third album called Spirit in the Dark that never saw the light of day. Leaked versions of "Walka Not a Talka" feature rapper Snoop Dogg, but the J. R. Rotem-produced cut was never originally Lohan's, according to PopCrush. It belonged to Mya.

PopCrush reports that Mya wrote and owns the rights to the song. At the time, she and Lohan were both signed to Universal Motown, where Lohan was given the track only as a reference — never to release as her own. (You'll notice that Snoop mentions Mya during his verse, not Lohan). David LaChapelle was allegedly tapped to direct Mya's "Walka Not a Talka" music video, with styling by Patricia Field, but the label's marketing head at the time thought it was too risky.

Mya ultimately left Universal Motown in 2008, and Lohan hasn't released any new music to date. So it's strange she'd bring up such an illusive relic on WWHL, that is unless she intends to release the track in some form in 2019. In today's musical climate, Lohan's "Walka Not a Talka" doesn't exactly stand the test of time (quite like Paris Hilton's impressive self-titled debut). It opens with an Egyptian-style flute, a very 2008 J.R. Rotem name drop, and thrusts into a hip hop-leaning chorus that doesn't work for Lohan, or any white singer, really: "If you a walka not a talka, G's up, G's up." Oh, wow!

Regardless, there is still space — and lots of time — for new Lindsay Lohan music in 2019 (Please Internet, do your magic and at least leak Spirit in the Dark in full). We genuinely loved Lohan's smoky, Marlboro vocals, ability to push through lip-synching scandals like a pro, and the way she always put everything out into the world for us to consume, critique and, if you're anything like me, quietly relish.