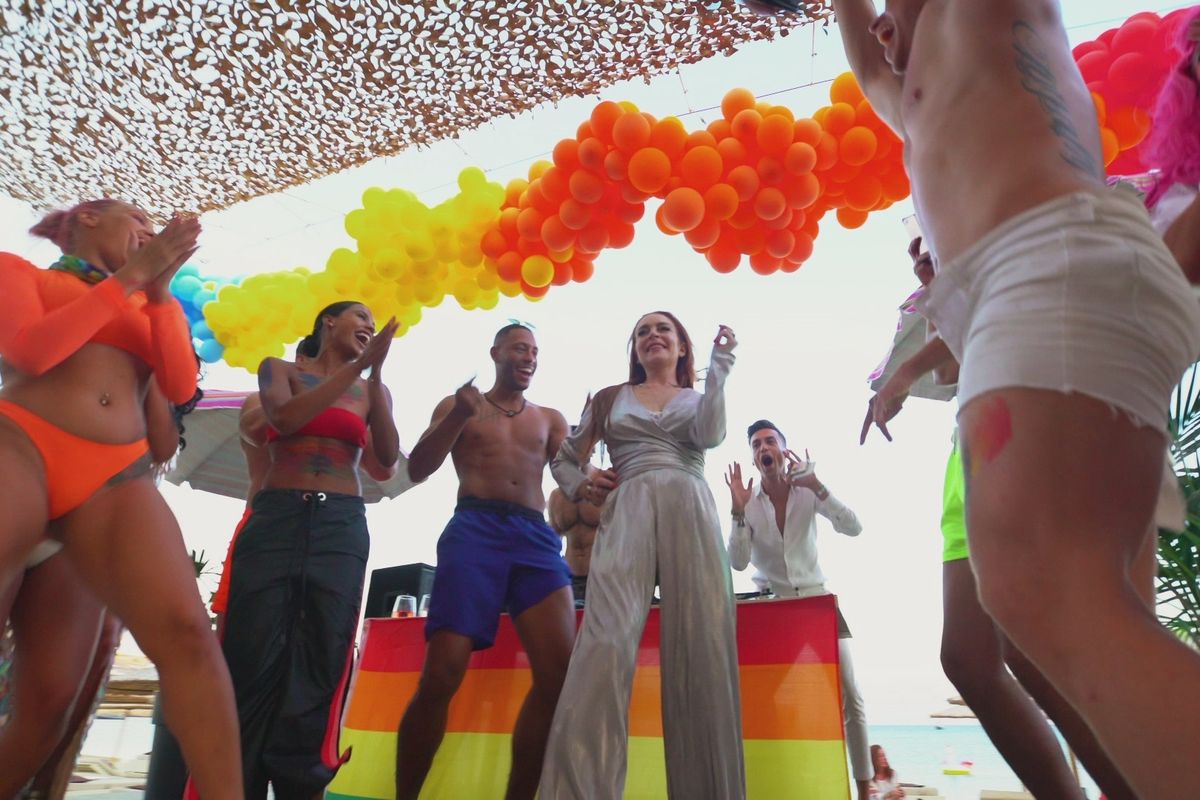 Welcome to episode eight of Lohan's Beach Club, the show that aspires towards being Vanderpump Rules but sadly more closely resembles a drunken beachside version of The Apprentice. Last week the beautiful-but-stupid Jules was sent home for no real reason, Mike was sad about it because they were sort-of dating, and Kailah had a big fight with Lindsay, who accused her of conspiring to take down the Beach Club with her offscreen boyfriend. They were drinking on a yacht at the time.

We open with the usual morning team meeting, which Lindsay never attends. Panos immediately gets mad at Kailah for having a hangover, and it's revealed that today's VIP client is a drag queen, Gloria Darling. Aristotle is assigned to deal with Gloria, and speaking to camera Brent reveals his theory that Aristotle is secretly gay: "So he should do a good job." Brent! I'm rooting for you, but you make it hard.

We also learn that the Beach Club is throwing a Pride party, which Lindsay and Panos hope will be good for business.

Lizzo's "Juice" plays in the background as Gloria arrives. I feel like MTV did that just for me, and I appreciate it. Brent, who I guess is a homophobe actually, says drag is not his thing. He looks visibly uncomfortable as Gloria knocks back shots.

Aristotle, meanwhile, is having a great time. He calls drag queens the "funniest people on the planet." An almost woke statement! "We get it, you're gay," says Brent.

"There's nothing sexual about this," replies Aristotle, smiling and keeping his cool. He says being straight doesn't mean one can't enjoy the company of drag queens. Aristotle never gets screen time on this show, but come to think of it his only other major moment was supporting Alex (who is gay) through a difficult family reunion with his conservative grandmother, a few episodes ago. Aristotle is an ally! It's nice.

"I think Brent has a lot of insecurities and takes that out on other people," Mike accurately observes.

Lindsay finally appears. She's visibly drunk. She watches Kailah, who is texting, with disapproval, then grabs a microphone out of nowhere and starts broadcasting her thoughts so that the whole beach club can hear. "Kailah's not doing her job," she drones. "She's just chilling."

The narrative here is confusing. Kailah was always positioned as one of the more efficient workers, but a Lohan's Beach Club plot tends to turn on a dime, so she's now the lazy one. Kailah just rolls her eyes and leaves the club.

Mike has been put in charge of the Pride party, and we see him leading a planning committee. His big idea so far is a balloon arch and some pride flags. Mike is bisexual and has mostly dated girls in the past, so he's stressed and feeling the pressure to be more camp while at the same time holding back due to other insecurities.

"My dad told me when I was coming out here, please don't be the gay one," he admits. Which is awful? Meanwhile Alex, the other queer roommate and Mike's one-time hook up, is excited to celebrate Pride.

Here's Lindsay! She's keeping an eye on Mike, as though waiting for him to fuck up the party planning. With typical lack of self awareness, she randomly reveals the twisted intention behind her making this show in the first place: "I live a life where everybody tends to watch me all the time. If people are going to look at me and judge me, then why shouldn't the VIP hosts be watched as well?" What?

Some of Lindsay's weird shady friends are here. One of them has kids, and Lindsay has the genius idea to ask said kids their opinions about the VIP hosts, because "kids don't lie." Is this a technique recommended in Girl Boss?

Lindsay stages an awkward interview with Mike, Panos, and the two tiny children. "What do you think about Kailah?" Lindsay asks Mike. Mike, friends with Kailah, immediately starts praising her personality and work ethic, but Lindsay interrupts, calling her "useless."

The tiny children look uncomfortable. They just want to go get ice cream and make sand castles! This has nothing to do with them. "Don't you think that the people who are mean to the other people should go home?" Lindsay asks one child. The child can recognize a leading question when she's asked one and gives an emphatic "yes." She's getting that ice cream!

"I didn't get the part in Mean Girls by bringing people down," says Lindsay, randomly. "I don't want people fighting and being mean to each other." For the record, we've never seen Kailah fight with anyone. Except Lindsay, who provoked her.

Now Mike is on the phone with his homophobic dad. "How are the girls, Mike?" homophobic dad asks. Wow. Mike is unbothered, though. "I think you'll be pleasantly surprised," he says, presumably referencing his hook ups with Jules, a card carrying straight woman.

We also learn that Mike and Gabi are choreographing a DANCE that they will perform at Pride. Mike is worried what his dad will think about this "flamboyant" act.

B-roll of the beach, then we're back at the villa, and Alex and Mike are fighting. Alex doesn't believe in bisexuality, specifically Mike's bisexuality, and Mike is offended. The fight ends with a lot of "fuck you"s. It's nasty.

Here's some interesting discourse. Gabi, who is also bisexual, notes women are often encouraged to flaunt their sexual interest in both genders. It's unfair, she says, that Mike doesn't get the same treatment. She tries to comfort him, but he's very upset. "You will have something meaningful, find someone amazing," she tells him. Gabi is being really sweet right now! I enjoy her.

The next morning, both Alex and Mike are hurting. They choose to ignore the issue for now and focus on the Pride party.

All the 'Lohan's Beach Club' hosts

Now everyone is sitting around the table by the pool. Brent does a Brent: "So who else in this house has had sex apart from me and Sara?" he asks. Nice humble brag. Aristotle lightens the mood by saying he's jerked off in the house. Everyone enthusiastically laughs, like it is the funniest joke they've ever heard.

Uh oh, the hosts are in for a surprise Lindsay appearance. We see her sneaking through the house with Panos while the hosts sit by the pool unaware. She's judging everyone's messy rooms. "This is disgusting, horrible, unacceptable," she says. "I used to live like that, and Oprah told me, you've got to organize your life." She mentioned her supposed relationship with Oprah again! Take a sip of your drink.

"Someone's going to get fired today, and that's it," adds Lindsay. She appears by the pool, interrupting the hosts with a big, "What's up bitches?" that doesn't land at all. Everyone quietly stares at her. "I went through your rooms, and it's a disgrace," Lindsay continues. "I want to fire everyone tonight."

Predictably, this comment gets Kailah fired up. "What does this have to do with the beach house or our work ethic?" she understandably asks. Everyone looks worried while Kailah continues to go off at Lindsay. Everything she says? Technically correct. But still.

"I don't let someone treat me this way just because they were in Mean Girls one time," she adds.

"You've been here what, four days, right?" Lindsay replies. I'M SORRY, WHAT? IT HAS BEEN WEEKS, NO? But I've said everything I have to say about continuity on this show.

Speaking to camera, Lindsay delivers another classic, bonkers line. "I saw red, I was worse than a vampire," she says, recalling the incident we just witnessed. "Like, I will not only eat you, I will kill you."

Back to the pool scene. "Pack your shit and get out," Lindsay tells Kailah. "You're fired."

"Continue doing all the drugs you do, Lindsay," says Kailah as she walks away.

The other hosts all look super uncomfortable and upset. I get the impression that they're all past the initial phase of thinking Lindsay is an egomaniacal diva — now they're genuinely worried about her mental health, and afraid she'll do something harmful to herself or others. They all have their heads bowed, each looking meek and terrified. Once again this show proves itself to be tremendously, unintentionally dark. The entertainment value dropped below zero a fair few episodes ago. Now we're just here to masochistically see this thing through.

"People build you up, and put you down. That's what this life is," says Lindsay. Brent looks like he wants to cry on her behalf. "Just to see how far you can fall. To see if you can come back up." I hope a 2007 era Hollywood paparazzo reads this recap to see what they have wrought.

Everyone at the table clearly feels so sorry for Lindsay, and so protective of her, despite everything she has done so far. "Be yourself bitches, never be anyone else," Kailah shouts as she gets into a cab and leaves.

Well, that was that. Back to Pride planning. Mike has a cute idea to surprise everyone by dressing Brent up in drag. Brent looks nervous but is down with the plan. He says he regrets being insensitive. He knows he's a lot sometimes. There we go! This is the Brent I like. A clueless bro who is secretly sensitive, and willing to improve himself.

The balloon arch has been constructed, and it's officially Pride day. Mike and Alex resolve their differences, rainbow flags are everywhere, and all the hosts seem genuinely pumped for the party ahead. Even I am excited, mainly to see Brent in drag.

Lindsay amusingly wants to claim the fact that no one has ever held a Pride party in Greece, "on this specific beach." God bless her.

The vibes are good, which is rare. Pride is a success so far. (Although, and I'm sorry to be negative, when the camera zooms out we can see that not many people are at the club.)

But when is our guest of honor arriving? There she is. The wig is pink, she's wearing a toga, and she looks amazing. Brent, as I expected, totally leans in and works it. Panos and Lindsay are thrilled, and his girlfriend Sara is impressed too.

Brent! Sadly they didn't give him a drag name

It "adds another layer to who I am as a person, so I'm down," says Brent of his first drag experience. He also observes that make up is uncomfortable and wonders how girls do it.

Now it's Gabi and Mike's choreographed dance. Great news: the backing track is Lindsay Lohan's "Rumors" (2004). She dances along and mimes all the words. Perfect. Everyone is having fun and getting messy. The whole show should just be this, ugh.

Apparently Nico Totorella is going to be on next week's episode! See you then.