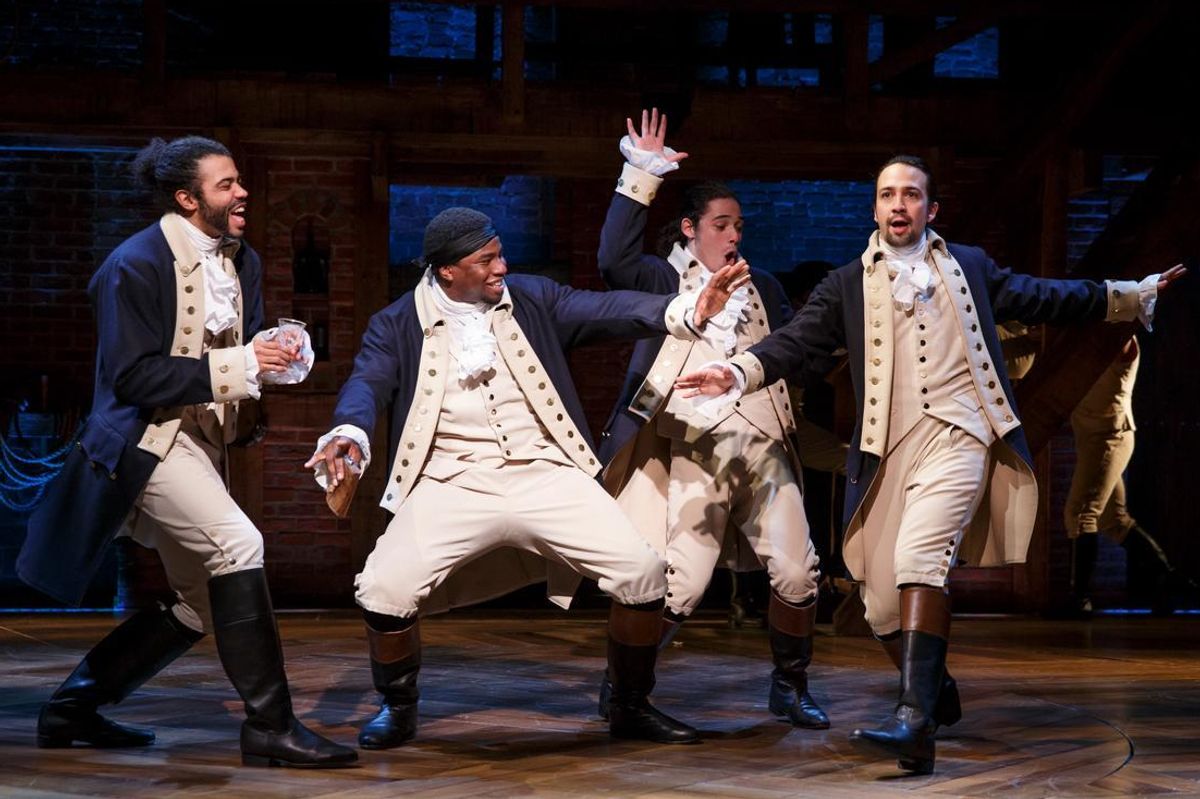 Hamilton is a Broadway smash, a sociopolitical phenomenon, and now a best selling book. The Pulitzer-winning hiphop-flavored musical about the founding fathers has spawned Hamilton: The Revolution, a sort of scrapbook via exploratory tract that takes you inside the workings of the show, and it's such a hit that the party for it at the Public Theater's Library the other night didn't have any books. "There are no copies left!" exclaimed the Public's Artistic Director Oskar Eustis, laughing.

Not that he was all that surprised. "If it was written on toilet paper and filled with fan quotes," said Eustis, "it would have sold, because it's Hamilton."

The show's creator, Lin-Manuel Miranda, explained why he wanted this book to be done (with co-author Jeremy McCarter) in the first place. "I wrote 60 songs for In The Heights," said Miranda, "and sort of went from a boy to a man writing that show, and I felt sad that there wasn't a document of it." With Hamilton, he said, "I felt even if we open and close in a day, we need at least the option of a book." When the effusive Times review came out on opening night, they knew it wasn't going to close in a day -- maybe in a decade -- which made the book all the more of a hot designation.

Longtime Broadway booster Rosie O'Donnell happens to be obsessed with Hamilton and recently told me, "It's like if Les Miz and 1776 had a baby. It's perfect!" At this event, Eustis described Hamilton as a show that's left the theatrical realm and become part of the national conversation--"about who's an American and even who gets to be on our currency." He added that Miranda embodies all the qualities that make it great to be an American -- and I would have rolled my eyes and cried "hyperbole", except that Miranda truly is a fireball of genius, someone who's inspired and enriched with his gift. I wonder how Sondheim feels about finally passing the torch to someone else who can craft witty and incisive musical theater that's also groundbreaking (after so many years of pretenders). It's sort of a Madonna/Lady Gaga situation, but in this case, I think there's genuine mutual admiration and respect going on between the lines.

Jeremy McCarter gushed over Miranda too, saying that working with him up close is even more extraordinary than observing him from afar. They had started talking about the book even before Miranda began writing the show, and McCarter wanted to capture the creative process -- to put you in "the room where it happens," as it were.

In this room, Eustis and I giggled over a certain reporter who's chosen not to jump on the Hamilton bandwagon -- "The cheese stands alone," I noted, pointing out that while I usually don't like to run with the pack, in this case it was unavoidable since Hamilton is so appealing. There was tons of food at the bash -- thank you, Hamilton -- and it turned out we did get a copy of Hamilton: The Revolution -- an audio book, spoken by Mariska Hargitay. If you want buy one, it costs less than two Harriet Tubmans.