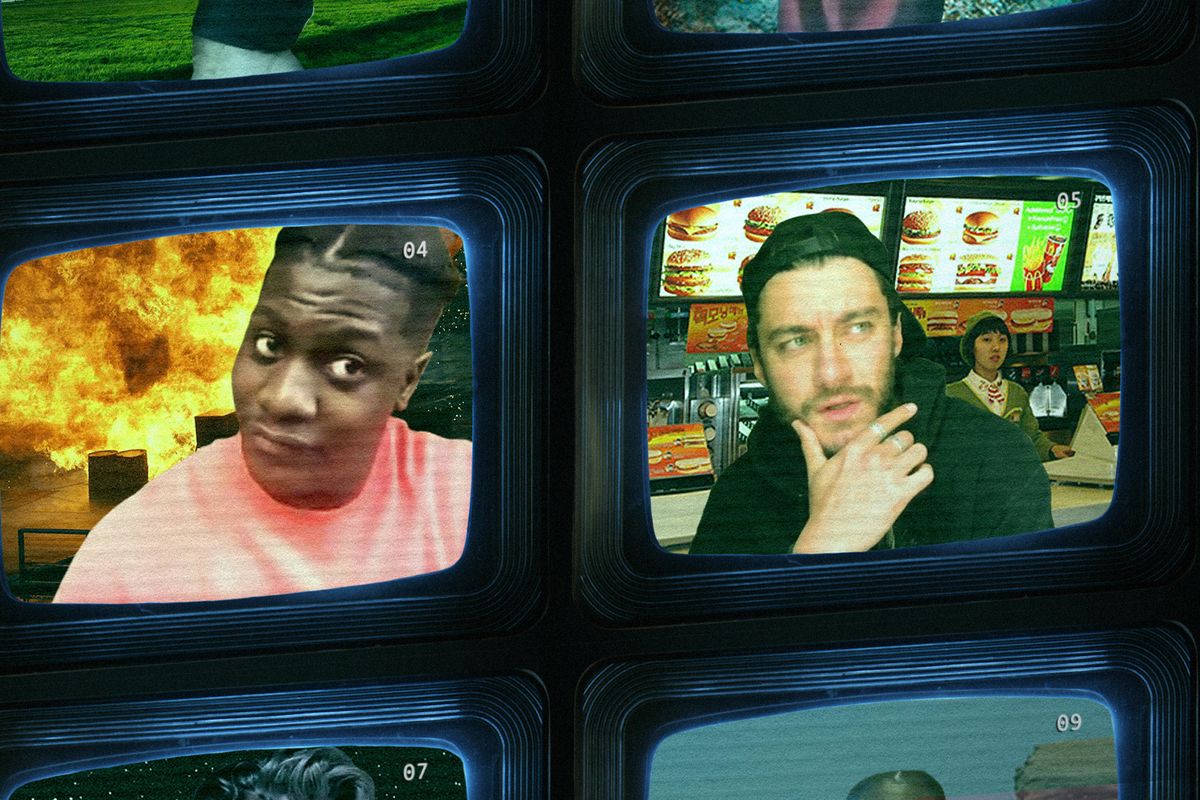 Lil Yachty and Casey Frey Get Weird on Zoom

A few months ago we asked rapper Lil Yachty and comedian Casey Frey to photograph each other on Zoom (because we thrive on chaos), and it lived up to everything we had hoped for: Logging in 10 minutes early to find Casey just sitting in silence, Yachty coming on 30 minutes late and sitting in his sneaker closet, Casey singing "Disturbia" on repeat, Yachty photographing Casey while eating waffles... you get the gist. Read the transcript of their Zoom call, below (edited down for time).

Lil Yachty: His lighting is so good. Alright, let's start it off. Give me sexy cowboy.

Casey: This is the first time we've ever met and we just go right into taking pictures.

Lil Yachty: I know! That's why it's so funny.

Casey: It's kind of weird.

Lil Yachty: Since this is an interview and I have you here, where do you get the inspiration for these skits?

Casey: Could be just from watching something online or I'll be in a mood and I'll just be with myself for a certain amount of time until I can make a skit out of it.

Lil Yachty: Do you script it or is it just fuck it?

Casey: No, I don't write anything. I'll usually just do hella takes and I'll keep adding onto it. I'll remember what i did and keep adding things on until it's good.

Lil Yachty: Damn, it's so good though, bro. You know I bought your merch! Did I ever tell you that?

Lil Yachty: I bought a few shirts and I bought them for everyone.

Casey: What did you buy? What merch?

Lil Yachty: I have the All Men Are Friends shirt.

Casey: That's one of the first ones.

Lil Yachty: Yeah, but that video went so up. That's when I first saw you in that video.

Casey: Yeah, I think you sort of helped me pop off when that went on. Did you repost it?

Lil Yachty: Yes! For sure, for sure. I definitely posted it. It was hilarious.

Lil Yachty: Yeah, that's fire. It's so funny that you did 10 seconds and then from there, it was just top tier. Then the homie that you do things with. I think his name is Nick?

Casey: I know. People are interested, I just needed to get my shit together sort of. I'm going to start writing something right now, though. That's where I'm at. I've been writing music.

Casey: No, I'm already making music, but I'm going to start writing some to pitch.

Lil Yachty: Do you find writing more difficult than writing your own thing?

Casey: Yeah, for sure because it's work. You need to sit down and write shit out instead of-

Lil Yachty: Instead of just being you?

Casey: Yeah, or instead of making shit when the inspiration is there, it's more like work.

Lil Yachty: I love your skits like the one where you're the drunk girl the day before the wedding. Did you just freestyle it?

Casey: Yeah, that was on the second take. I was just super fucked up. It actually kind of helped with it because I was actually so messed up.

Lil Yachty: That one was actually so hilarious. When I first started doing music and first made "1 NIGHT" in 2016, kids would come up to me all the time and be like, "Yo bro, we played this song so much here." But in the moment you don't ever get to think about, "Damn, I wonder who's watching this." Sometimes we can forget or be discouraged or confused about whatever we're doing especially if in the moment it's not turning into gold or turning into overnight success. You got to let them know that you're definitely hilarious.

Casey: Thank you, man. I appreciate it.

Lil Yachty: It's all good, bro.

Lil Yachty: I need to stop, but I just want to let you know that you're doing your thing and I love it. I show everyone anytime I'm with someone or a girl, I always pull up your videos because it's guaranteed to make someone laugh. Especially the way you can pull your shoulders up.

Casey: Yeah, put your guns up. Jump in your pool!

Lil Yachty: I wish, but these braids are fresh.

Casey: Who does your braids?

Lil Yachty: My mom's hair stylist does. She's an older lady. She's nice. She's been doing my mom's hair since I was alive. I live with 10 people, so it's an interesting day every day. It's a group home.

Casey: Group home up in here.

Casey: Is that safe?

Lil Yachty: Right! They're probably trying to poison us. You look like Johnny Depp in 1999. I'm so jealous that you have blue eyes.

PAPER: What are you eating?

Lil Yachty: A Cinnamon Toast Crunch waffle... I'm sure you've been stopped over a few times.

Lil Yachty: I think I have nine speeding tickets on my record.

Lil Yachty: Yeah, I got my license taken away twice in the last year.

Casey: Wow, it's like a set up. I recently got a new Lexus GLS. It's like a sports car. It's not like crazy crazy, but it's faster than anything I've ever had. It's so smooth that you can't tell.

Lil Yachty: That's so white. I would never wake up and think, "Damn, I need a Lexus."

Lil Yachty: I wouldn't even know that.