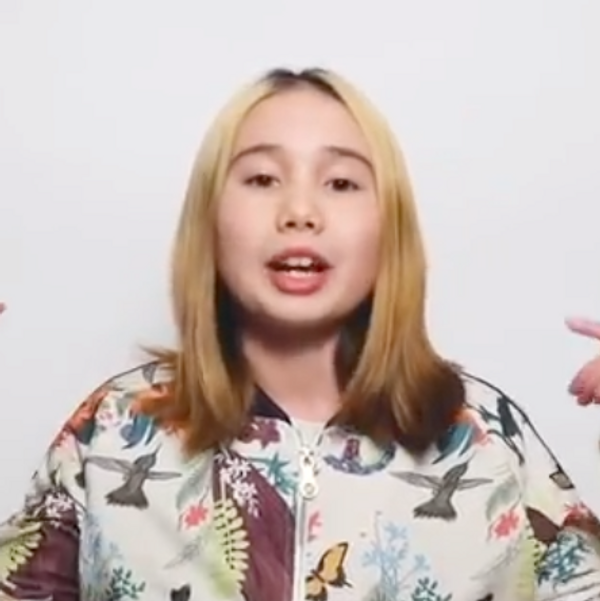 Fans are continuing to rally behind Lil Tay after her long-dormant Instagram detailed allegations of abuse at the hands of her father, Chris Hope.

Back in 2018, the then 9-year-old — real name Claire Hope — became a viral star thanks to her extravagant videos, controversial mimicry of Black culture and a highly publicized altercation between fellow internet sensations Woah Vicky and Bhad Bhabie.

However, Hope's online persona was obviously met with some backlash and caused substantial problems for her family, including child exploitation accusations against older brother Jason Tian, who was seen coaching her in a leaked video. At the time, it was also reported that her mother, Angela Tian, was fired from her real estate firm for using for-sale houses in Tay's videos.

That said, ever since a Canadian judge granted Chris full custody, she's gone radio silent. And now, a recent Instagram Story about "bad news" and disturbing follow-up posts documenting the alleged abuse has fans extremely worried about her well-being.

In the account's first post since June 2018, Tay can be seen crying in a video alongside a caption from Jason that accuses Chris and his new wife, Hanee Hope, of physical and mental abuse. The posts also touch on efforts by the couple to maintain full custody of Tay so they can allegedly live off of "the millions they stole from her." Jason also maintains that Chris owes over $400,000 in child support and that Tay's been "scratched, beaten and repeatedly thrown in a dark closet."

"This was the moment in 2018 my mom showed Tay the court order from her abusive absentee father demanding custody, money, and control over her career," Jason wrote before adding, "Tay has no money left to pay lawyers for fighting for her freedom, her father has stolen everything from her."

As a result, Jason launched a GoFundMe and has already raised over $15,000 to cover her legal fees. On the fundraiser's page, he also alleged that Chris is the reason behind Tay's social media disappearance and added that he was silencing her through a court order "to prevent her from speaking out about the truth."

Granted, while the new posts have spurred substantial concern under the #SaveLilTay hashtag, there are also plenty of skeptics questioning whether this is a "scam" or "publicity stunt" concocted by Jason to "[exploit] his child sis for money."

how come lil tay looks way younger than she was in 2018 in the photos showing her getting abused on GFM, the brother had no problem exploiting his child sis for money, the odds of this being a scam set up by him are very high

Is liltay actually in danger? or is this a publicity stunt if it isn't hopefully she gets the help she needs.

On Thursday though, Jason posted an update in response to the all of the "conspiracy theories," before explaining that "a Supreme court case directly involving a minor is not public information, all documents are sealed and will not show up in the registry."

"I am just now speaking out about this because I am no longer a minor and now have the right to do so without harming my family legally," he continued. "All people alleging that I am 'stealing money' through a GoFundMe please look at the facts. Look at the police reports about the abuse, this is a serious situation."

Previously, Chris denied prior abuse allegations — made by a purported hacker on Tay's Instagram — to Hollywood Life, saying that he had taken legal steps to put a stop to her online fame, which he said was "dangerous to her physical and mental health and to her future."

"I do not think a 10-year-old girl should be put in those situations and made to drop out of school so that she can make money for other people," he wrote in the 2018 email. "Everyone else involved in this situation is motivated by money and the possibility of making money off of my daughter. I am not fighting about money; I am fighting for my daughter—for her happiness and her future."