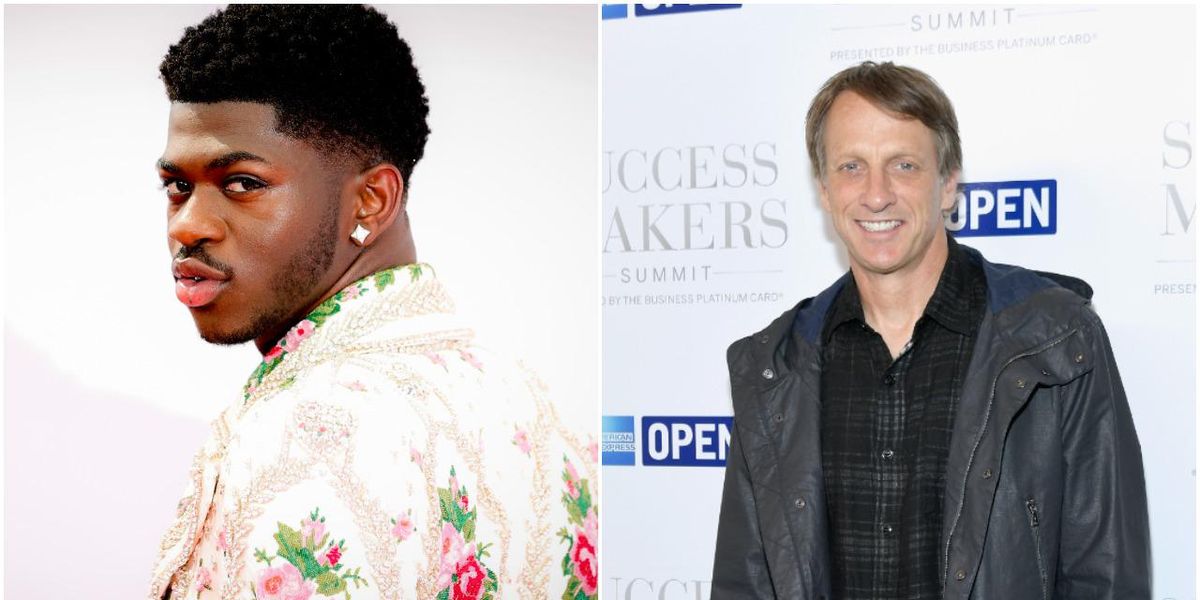 On Tuesday, the skateboarding icon announced the release of a limited edition skateboard made with a canned water company called Liquid Death. And as part of the gimmick, he apparently gave away two vials of his own blood to mix into the paint used to decorate the boards, which cost $500 and sold out in about 20 minutes, according to E! News. However, the collaboration's success is now dividing the internet, seeing as how Hawk received way less pushback compared to Lil Nas X's "Satan" shoes.

In case you forgot, the rapper previously dropped limited edition sneakers — which featured a pentagram and drop of blood in the soles — as part of the rollout for his fire and brimstone-themed "Montero (Call Me by Your Name)" music video.

That said, while LNX's modified Nike Air Max 97s were immediately condemned as sacrilegious by conservative Christians and eventually led Nike to sue LNX collaborator, MSCHF, for trademark infringement, as defenders of the rapper pointed out, Hawk wasn't really attacked for the stunt. And the disparity ended up leaving many wondering why it was "a problem" when Lil Nas X did it versus a straight, white skateboarder.

"*Gay black man sells blood shoes* People: 'Boooooo!' *White dude sells blood skateboards* People: 'LETTSSGOOOOOO!!'," as one Twitter user wrote, while another added that it must be because "they dont like successful gay men of color."

Oh, but when @LilNasX does it, it's a problem? pic.twitter.com/269UrrpgTj

Even so, a few people pushed back on the accusations as some argued critics were "missing the point" by chalking up LNX's controversy to homophobia. Rather, they said it was because "it was a Satan shoe," and many "don't play with satanic imagery," before adding that no one was "out to get" the rapper.

Sir, you’re very talented and smart. Please don’t continue to miss the point. Folks didn’t like your shoes because it was a Satan shoe. And the vast majority of people, irregardless of their view towards your sexuality, don’t play with satanic imagery. No one’s out to get you.

Granted, the online discourse has since led LNX himself to address the issue in a tweet questioning why "there was no public outrage" over Hawk's skateboards.

"are y'all ready to admit y'all were never actually upset over the blood in the shoes?," he wrote. "and maybe u were mad for some other reason?"

now that tony hawk has released skateboards with his blood painted on them, and there was no public outrage, are y’all ready to admit y’all were never actually upset over the blood in the shoes? and maybe u were mad for some other reason?

Neither Hawk nor Liquid Death have commented on the debate.