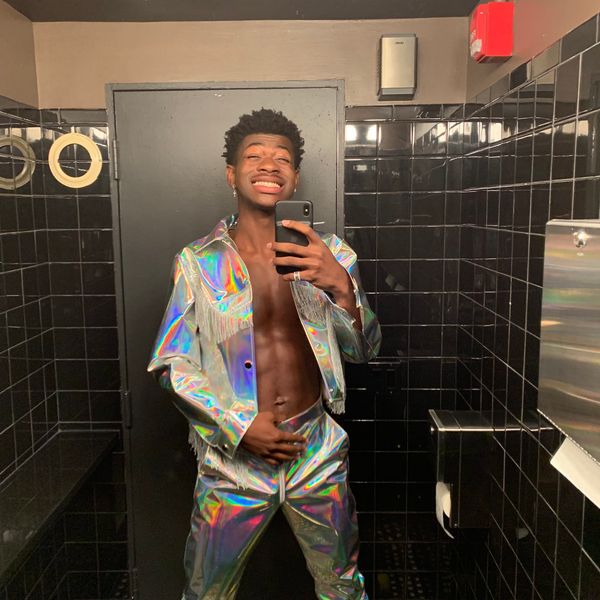 Thursday night, BuzzFeed hosted their first ever "Internet Live" event at Webster Hall in New York City, and they invited every viral celeb you could possibly think of to join them — Jojo Siwa, Snooki, the "Damn, Daniel" guy. Let's be honest, though, what's the internet without our yeehaw king himself, Lil Nas X?

The "Old Town Road" singer and Billboard chart-smashing superstar attended the event and, unlike Jojo Siwa, who poured buckets of sludge on herself instead of singing, performed his number one track, as well as "Panini" off of his new EP. The star of the show, however, wasn't a Jersey Shore cast member or even a meme come-to-life, but Lil Nas X's custom holographic fringe suit, designed by the New York City-based Krone label.

The TikTok-launched star looked sharp as hell snapping pics in a Webster Hall bathroom at the event, making sure to capture every angle of the reflective look. Let's just say his stylist knew exactly what she was doing when she dressed him in the stunning cowboy-inspired fit.

If you thought the rapper would keep the suit pressed and fresh for his archives post-performance, you'd be mistaken — he took the suit for a ride outside the venue as well, stopping to pose with an alien, presumably inspired by his newest remix video for "Old Town Road."

And, if you thought we had reached "Old Town Road" fatigue, you would also be mistaken; BTS' RM just hopped on his own remix of the song, lovingly titled "Seoul Town Road," boosting Lil Nas X to Army levels of fandom. Stan Twitter, keep doing your thing — we need to hit 17 weeks at number one for "Old Town Road" to beat an all-time Billboard Hot 100 record.