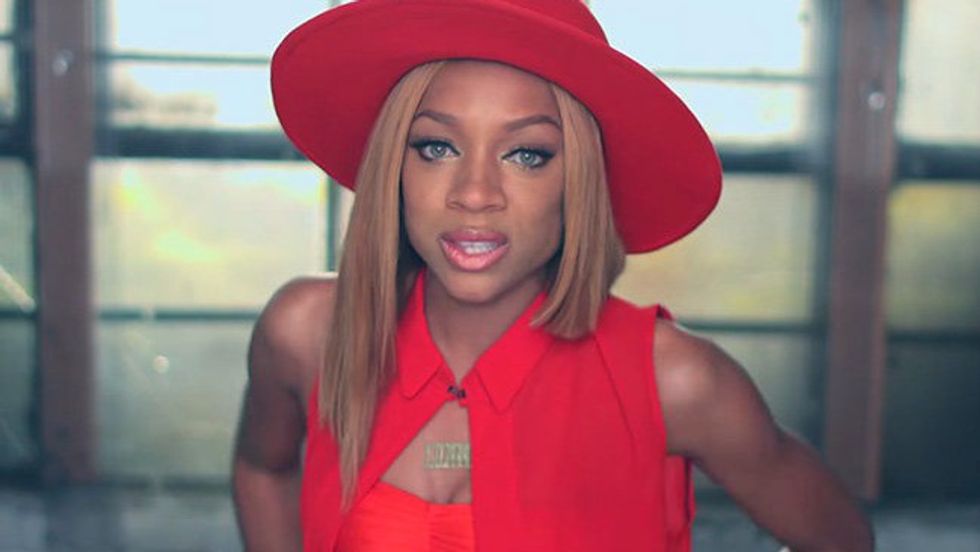 Lil Mama's "Sausage" Party is Beautiful, in Every Single Way

by Eric Thurm
PAPERMAG
The internet went crazy for Lil Mama's new track, "Sausage." It's not hard to see why. (Hard not to see, really, if you've watched the video.) It's an old-school hip-hop safe sex anthem about breakfast foods, piggybacking off the "sausage rap" trend by taking its meat and repackaging it like, um... you know. Take a look at the video, in which Lil Mama at one point transforms into Mary J. Blige. (The Fader warns, with some justification, that it should come with a seizure warning.)

In "Sausage" and its psychically explosive, mind-expanding video, Lil Mama not only showcases her bombastic, precise choreography, but also takes absolutely no prisoners in her desire to remain absolutely shameless and ridiculous and supremely competent as a pop artist. I mean, look at this video. Listen to this song. It references an insane number of classic rap cuts. She shouts out "Trap Queen." There are literal flames. And that's not even including the weirdness of doing a "sausage rap" song a few months after that was really a thing.

Is Lil Mama packaging an old teen meme as part of an attempt to be relevant after only having one studio album, serving the people as a judge on America's Best Dance Crew, and appearing as Left Eye in that TLC biopic? Maybe (probably), but she's also capturing the go-for-broke, not giving a shit spirit that makes goofy stuff like sausage memes so fun in the first place, and running it through a blender with all sorts of other weird things that she's clearly really into. Lil Mama is a queen of being excited about stuff. Look at how enthusiastic she is in the acknowledgements at the end of the video!

Besides, in addition to being a delightful human being who is capable of emotional vulnerability and a surprising level of perspective, Lil Mama's last batshit pop song is also one of the best things ever to grace not only the internet, but also human ears: "Lip Gloss."

Without starting to write a long poem of praise for "Lip Gloss," I'll just ask that you watch the video again. Okay, one more time. We're good? Yes, we can all agree that it's just a great, supremely fun song, one that's tough to dislike without delving into horrible crotchetiness. In fact, try putting "Lip Gloss" on at a party this weekend, and see how many people say something like "Wow, I love that song! Haven't heard it in years." Like Ms. McClarkson in the climactic verse of "Lip Gloss," you must admit that bubblegum is popping. So if you didn't like "Sausage" the first time around, go back and ask yourself--what do you know about Lil Mama?