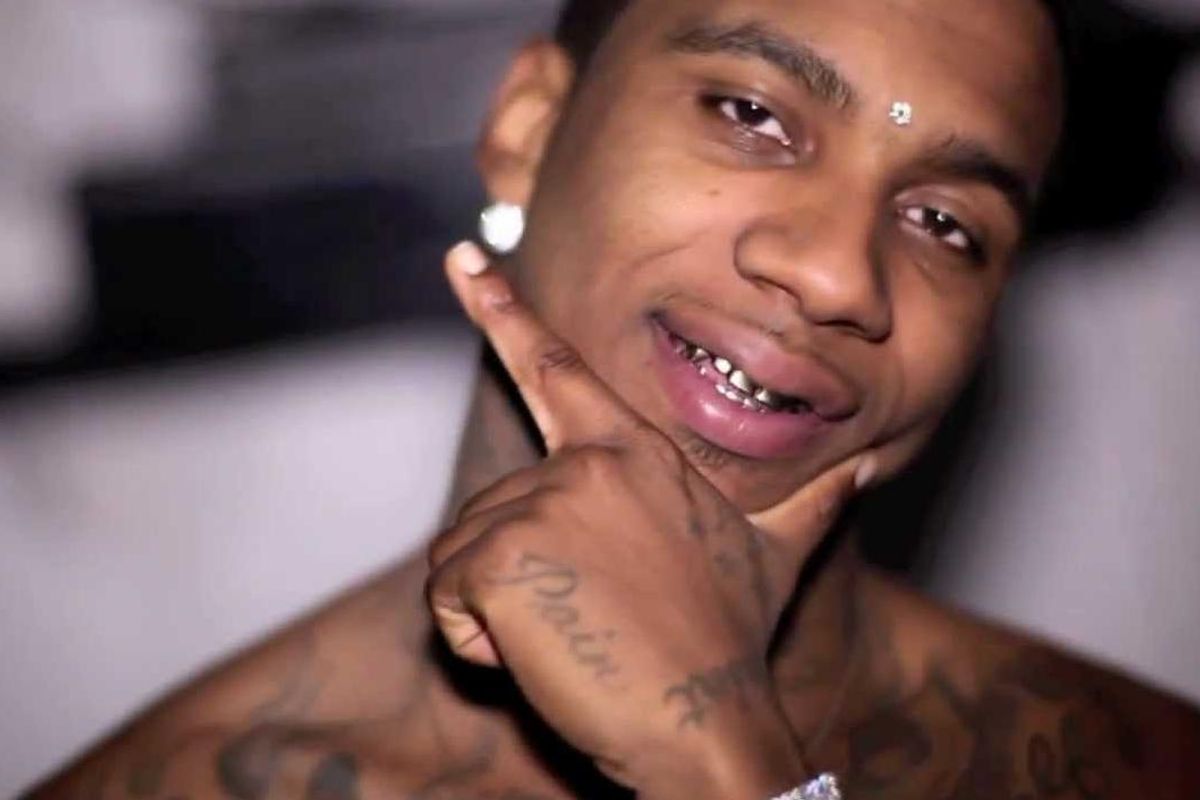 Why Lil B Is One of the Most Influential Rappers Alive

In 2016 we spend half our time making fun of what hip-hop has turned into and the other half buying or streaming all of it. A good indication of where we're at is the fact that many of us, at one time or another, have asked: is this shit serious? Did we ever have to ask that question in earlier decades? Things used to be so much simpler. Now our favorite MC is having sex with himself in his new video and it's hard to understand half of what he's saying. If you're a hip-hop fan in 2016, when faced with the question -- is this serious? -- there are only two possible answers, and every fan of hip-hop needs to make a choice.

The first choice: hip-hop has jumped the shark and is in a death-spiral of self-parody.

The second choice: Lil B is the BasedGod. With Lil B, all things are possible. He is the sum total of your highest aspirations; he is the author of all of your nightmares; he is the only hope for all of the plants and animals. Should you make the second choice, you won't be going to war alone. Earl Sweatshirt is on your side. Chance the Rapper fucks with the BasedGod. Kendrick Lamar does, too. Ask any of these rappers to explain their loyalty and chances are they'll offer some version of Earl's explanation: "I fuck with Lil B because when he came out, he changed so much shit." Danny Brown goes even further, calling Lil B "the biggest influence on hip-hop in the last 10 years," and also, "That n****'s like the David Bowie of this shit right now."

So what "shit" has he changed? For starters, he once freestyled "Damn I'm a Princess / Goon-Ass Negro / Rob your fucking bitch and I / Never Gave a Fuck Though," and has also shown up on Sportsnation looking like Bea Arthur. And today, in 2016, your favorite rapper sometimes dresses like a 14 year old girl. Coincidence? There's more. Do you use the word swag? Do you bark out random sounds in all of your songs? Have you listened to Yanni and thought: "Fuck I'm going to drop some fire on this shit everybody back the fuck up"? Do you use the internet to distribute your music for free in order to establish your fanbase? Consider this last point alone. Lil B is said to be the father of Internet Rap. He's credited with the re-emergence of mixtape culture -- he's released about 50 albums since 2009, one of which had 100 songs on it. It's easy to argue that Lil B has been at (or near) the forefront of most of the major trends in hip-hop over the last decade.

In this series that looks at hip-hop artists who changed the paradigm and influenced countless artists who followed, we talked to Lil B about what it means to be #Based and to explain the major hip-hop trends attributed to him. And we asked him about Lil Wayne, an artist who inspired the BasedGod to be as Based as he is.


Lil B on Trends He Started

"The swag sound is what I created. Swag music. Pretty boy music. Based music. And Wikipedia, I guess, they created the term "cloud rap," which was actually based music, and they crowned me the originator of cloud rap, as well as Clams Casino, A$AP Rocky…[I influenced] everything from the style of rap, how people are rapping…like the Future sound [ imitates Future rapping] -- I started that type of rapping and really brought that to the forefront for this new swag generation…You go to my production…the new age ambient film score music that I have been creating, and the albums that I have executive-produced with the BasedGod that had no rapping on there, that charted Billboard right up there with Yanni…Yanni was #1, and I think my first new age ambient album -- I think it was like #3 or #2 -- so that was a huge success for me, as well as the follow-up, new age album which was received really well, too. A bunch of prestigious people wrote about it, reviewed it…it's so much to think about.

Lil B on the Based Lifestyle / Based Philosophy

"Based just means being yourself, doing what you want to do, letting people accept you for who you are, and really just not caring about what other people say about you -- doing what you want to do and what makes you happy... It's the full realm -- the ideas, the sounds, everything that goes along with it…It's rooted off positivity and nothing else…From the clothes, to the attitude…I mean the reason why rap is positive and open-minded today, and all the artists that are popping today, and the reason why rap is on the Internet is because of Lil B…I love that the rap game has copied off my positivity. I think that's the best thing that they took from me is the positivity so I'm extremely happy about that."

"I definitely appreciate the people understanding Lil B is history and using [Lil B's] strength to be brave."

Lil B On Lil Wayne

"Lil Wayne is the best rapper ever to live. Better than Tupac, better than Biggie. He's the best rapper to ever come on earth. All around. Wayne is better lyrically than Eminem. He's better lyrically than Jay Z…At the end of the day, Lil Wayne is the best, most electrifying artist maybe ever. I don't know. He's up there with Michael Jackson. Even over hip-hop, rock, country, and DJs and shit like that -- Wayne is up there with the Beatles and, you know, Elvis and no one can tell me different. And if anybody disagrees…I don't know. Wayne. He has a million plus dollars in his mouth. He doesn't have real teeth…People just gotta wake up. He doesn't have real teeth. People need to wake up and give this man his props. He has a million dollars in his mouth and people just walk by him like he's normal. You know what I mean?

Wayne's always been all around…I think Wayne's given us more than enough. I think the kids need to do themselves a favor and justice and go -- pay attention -- take some history classes on Lil Wayne. Go buy his music. Go really search and try to figure out…I appreciate him so much. I think Wayne is perfect. I really feel that way in my heart. I really just pray for him. I want to work on more music with him and just help out in whatever way I can."