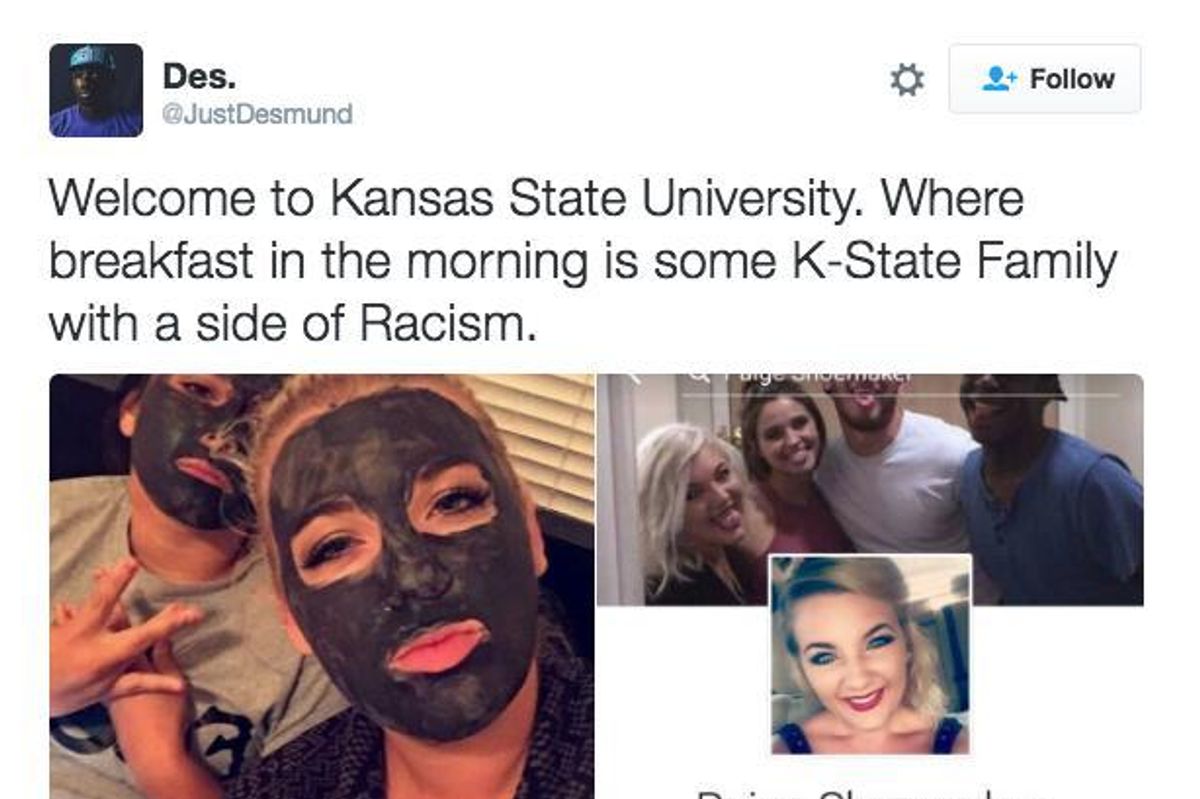 UPDATED: Like the Falling of the Leaves, Autumn Brings the First College Student in Blackface


Yesterday afternoon, Shoemaker went on Facebook to post an extensive apology for her Snapchat. "We clearly understand that what was said and done was completely disrespectful," she wrote. "We had only meant for it to be taken in a funny way, but we clearly understand that what we said should never be joked around about...Ask anyone who knows us, we are the most accepting and least racist people." She also informed everyone that she and friend Sadie Meier were wearing facemasks. Read the full apology below.

Labor day has passed. The air is getting crisp. School is back in session. And with the inevitable flood of proto-adults back to college campuses has come that harbinger of fall, ignorance, and poor taste: A white student in blackface.

This particular incident involves two women linked to Kansas State University. This morning, KSU student Desmund Weathers tweeted a screenshot of a snapchat, writing, "Welcome to Kansas State University. Where breakfast in the morning is some K-State Family with a side of Racism." The screenshot showed a woman, who with another photo Weathers identified as Paige Shoemaker, and a friend wearing blackface, making westside Ws, and captioned "Feels good to be a n*gga" and laughing tears smiley face.

Welcome to Kansas State University. Where breakfast in the morning is some K-State Family with a side of Racism. pic.twitter.com/Vmdkl5g27g
— Des. (@JustDesmund) September 15, 2016

Over several tweets, Weathers shared his disappointment in this expression, and how it points up some of the problems with KSU's culture and diversity.

But I'm supposed to walk into my classes feeling completely comfortable with people on our campus who think like this?
— Des. (@JustDesmund) September 15, 2016

The saddest part is I guarantee there are going to be so many people trying to defend her.
— Des. (@JustDesmund) September 15, 2016

"Feels good to finally be a nigga" White people want Black Magic so bad. They have to disrespect you to want to be like you.
— Des. (@JustDesmund) September 15, 2016

That's cool and all but what about all the other people here who think like her?? We have to change psychology. https://t.co/q3MrYQq6wn
— Des. (@JustDesmund) September 15, 2016

This is our environment and we still don't have a multicultural center as a safe space. Wyd? @KState
— Des. (@JustDesmund) September 15, 2016

KSU promptly released an official response from the VP of Student Life and Dean of Students Pat Bosco condemning the snapchats, noting that "there is no place for racism at our university, regardless of what the intentions may have been. K-State prides itself on being one family, no matter your race, ethnicity, gender, sexual orientation or abilities."

A later message, from the Associate Provost of Diversity, Dr. Zelia Wiley, further clarified the situation. "The involved person is not currently enrolled at the university," she notes, presumably meaning Paige Shoemaker. "It is our understanding the second individual in the photo is not associated with the university."

Though she may not be enrolled, what appear to be Shoemaker's social media accounts (two private Instagrams) still both proudly proclaim KSU affiliation--and, naturally, that she's not a racist.