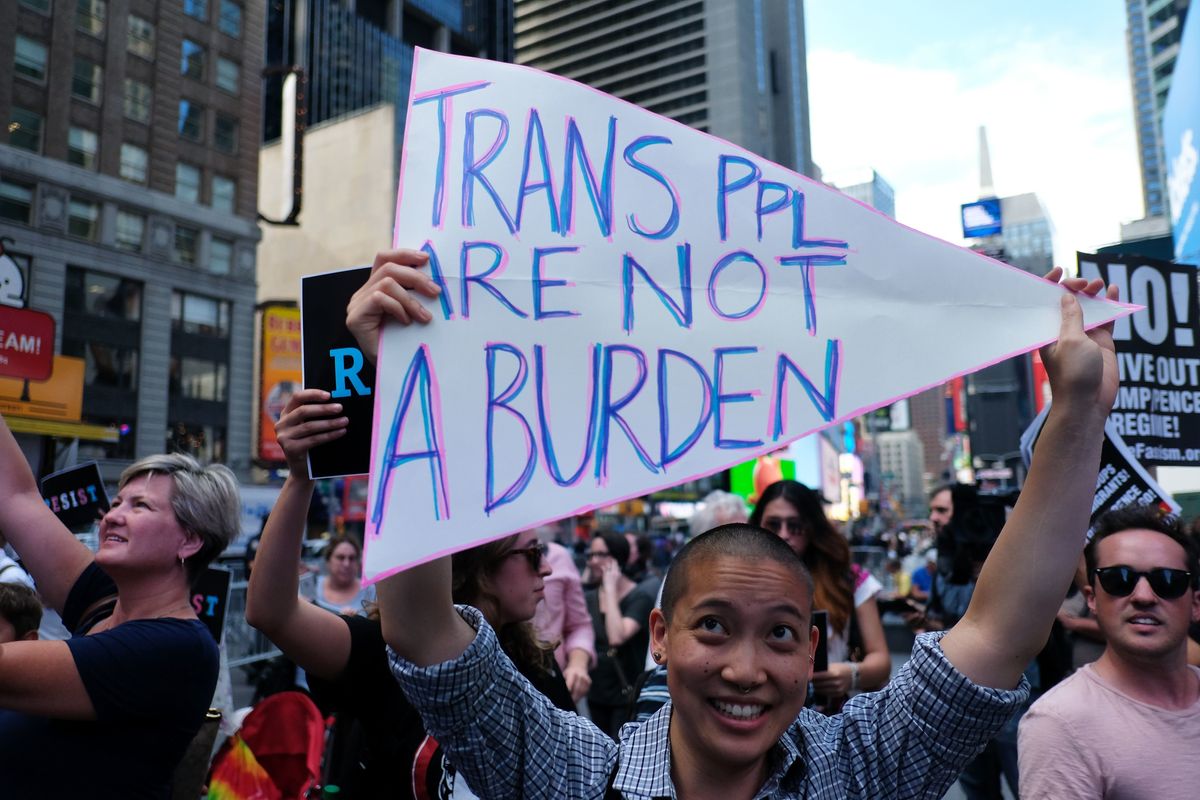 In the wake of the Trump administration's attempts to redefine gender as a category based on "immutable biological traits," the trans military ban and spiking rates of hate crimes, LGBTQ issues are apt to be front and center in the 2020 presidential race.

As such, this year, for the first time ever, Democratic candidates for president will participate in a primary debate forum specifically dedicated to LGBTQ issues, according to the Washington Post and NBC.

The debate will be held Los Angeles on October 10 (the day before National Coming Out Day), and co-hosted by the Human Rights Campaign (HRC) and the UCLA Luskin School of Public Affairs. Qualifying candidates will focus on "hate crimes, bullying and transgender rights," per the Post.

Related | 40 Trans and NGC People Sound Off On Trump's Memo

In a statement, HRC president Chad Griffin emphasized the enduring importance of LGBTQ issues, despite landmark victories, given the drastic differences in protections and resources for LGBTQ Americans have depending on where they live.

"If any LGBTQ person were to take a cross-country drive from HRC headquarters in Washington, D.C., to UCLA's campus, their rights and protections under the law would change dozens of times at every city line and state border," HRC President Chad Griffin said. "Millions of LGBTQ people will have their rights on the ballot in 2020 — but today we are also a powerful voting bloc that will help determine the outcome. We're excited to partner with UCLA Luskin and create an opportunity to hear candidates' agendas for moving equality forward."

There are currently 12 Democratic debates on the books for 2019 and 2020. To participate, candidates must have at least 1% support in three qualifying polls, or evidence of 65,000 individual donations from 200 different donors in at least 20 states, according to The Hill.

Pete Buttigieg, the 37-year-old mayor of South Bend, Indiana (who would be the first gay presidential nominee) recently confirmed that he has reached the donations cut-off, and thus will be able to participate, offering a queer perspective in the upcoming debates.

As of now, polls show that Joe Biden, Bernie Sanders, Kamala Harris, Elizabeth Warren, Beto O'Rourke, Cory Booker, Amy Klobuchar and John Hickenlooper will qualify based on polling alone. Julian Castro and Marianne Williamson's aides say they're on track to qualify. Jay Inslee, Kirsten Gillibrand, Tulsi Gabbard and John Delaney are also aiming to reach the $65,000 donation mark. The donation-based qualification was added as a way to to off-set the influence of large-dollar donations, and reflect the influence of grass roots donations.

While there's lots of diversity on economic issues in the field, most of the democratic hopefuls are dependable supporters of LGBTQ rights. However, a few candidates have questionable marks on their records, including Gabbard, who has apologized for her work with The Alliance for Traditional Marriage and anti-LGBTQ statements and Harris, who recently "took responsibility" for legal briefs she wrote opposing state-funded surgery for incarcerated trans women. Elizabeth Warren also recently reversed her position on state-funded surgeries for trans prisoners. Booker, Delaney, Gabbard, Gillibrand and Harris all have 100% ratings from the Human Rights Commission.

Despite this relative homogeneity, the debate will push candidates to articulate substantive proposals for addressing LGBTQ discrimination — and give a queer politician a voice on the issues.

Check out LGBTQ Nation's guide to the candidates, and HRC's scorecard for the current congress for more info about the Democratic candidate's LGBTQ track records.