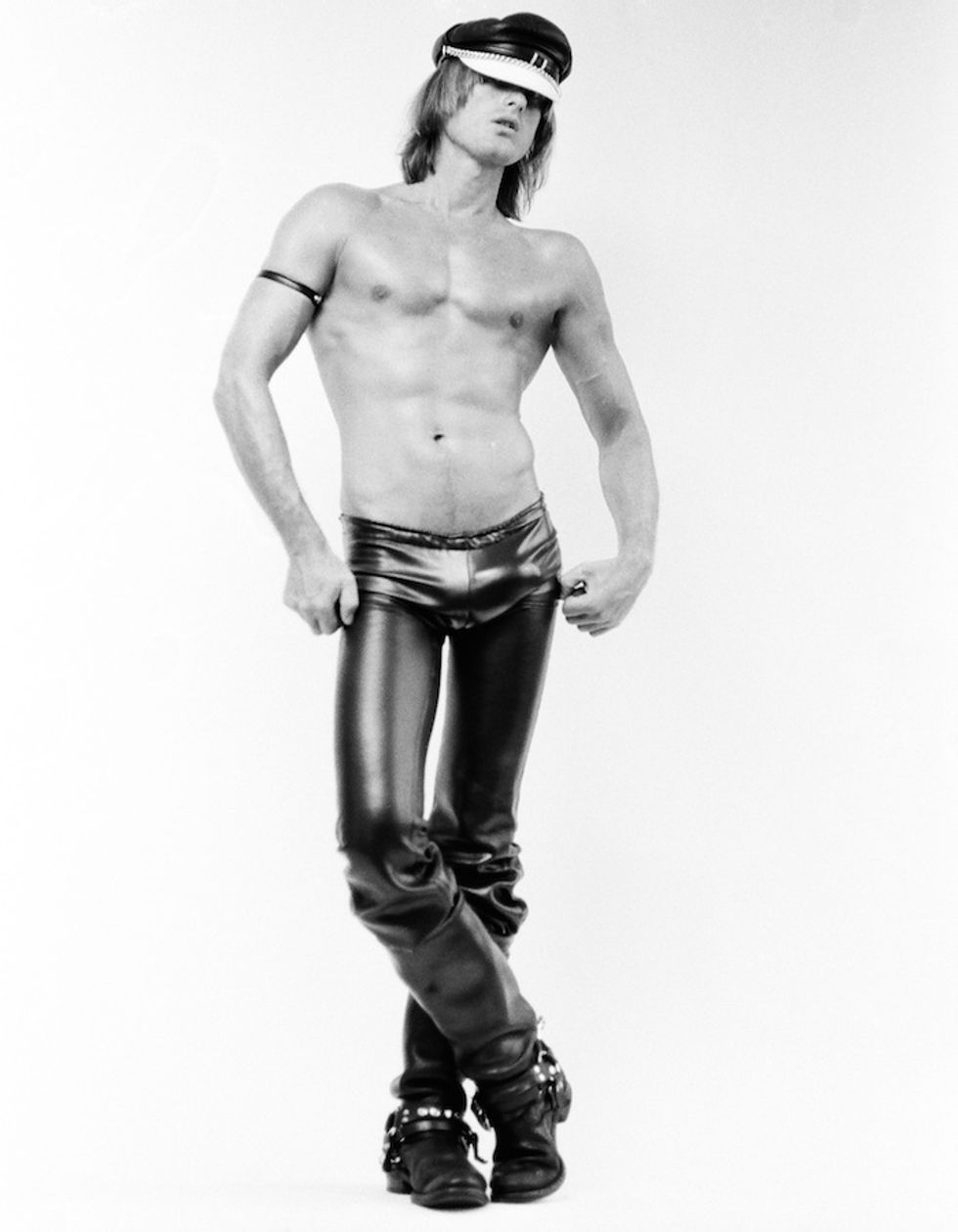 by Christopher Barnard
PAPERMAG
To a certain generation, the name Peter Berlin evokes an image of strutting '70s male sexuality, all overstuffed leather pants, and blond Prince Valiant hair crowning a body of rippling, tanned muscles. Born Baron Armin Hagen von Hoyningen-Huene, Berlin would come to personify the sexual freedom and insouciant attitude of an era with his gay cult sex films like Nights in Leather and That Boy that chronicled the very real encounters he based an entire life pursuing and perfecting. His relationships with the likes of Robert Mapplethorpe and Andy Warhol also established him as one of the more compelling figures of the moment, where hedonism for its own sake seemed to be a perfectly acceptable existential end.

In addition to his films, his series of self-portraits furthered his sex god status and could be argued as a pre-cursor to the selfie, if fully produced and knowing in their Narcissus quality. These images are now the new subject of an exhibition at ClampArt gallery in NYC, which opened last week, an occasion that provided the chance for us to talk to the man behind them. Now preferring to live a quiet life in San Francisco, coincidentally among the streets he used to prowl so famously, Berlin, now in his 70s, talked to us about the personae he created, his brief return to New York, and his first few weeks on Facebook.

What made you decide to do an exhibition after all these years?

It was the brainchild of a friend of mine who tried to convince me to do something with my life. I'm not that Peter Berlin [anymore] that was doing the pictures that one will find on the walls in the gallery, right? So it's sort of just a very weird feeling for me where I am grateful in a way that there's an interest. On the other hand, I'm sort of over it, you know?

It doesn't sound like you're taking it all too seriously. But did you take it seriously then when you were taking the pictures?

I didn't see it as [seriously as], for instance, my friend at that time, Robert Mapplethorpe, who took his stuff very serious and he had a goal of wanting to be a good photographer, a known photographer, a successful photographer, and a rich photographer. I just did photographs, self portraits. You know, yeah, that's how serious I took it. Like the people today with the selfie and an iPhone. That's what I did. Only that I had to sort of go through a little more difficult procedure.

Do you see at all any narcissism in your self portraits, especially since you were so known for your beauty?

Being narcissistic, I'm so against labels. So you know, I am a pornographer, I am a narcissist, I am, you know, whatever people think I am or what I do. I realized of all the people I met in my life, not one person has seen me as I am. There's an assumption especially with me, with having done what I have done. It's a point of discussion.

If people weren't seeing you as you were, can you talk about the character of Peter Berlin you created?

At the time it was so unusual that a man was doing what women have done for centuries, you know, with the tight dress and the breasts showing. But then when a man is doing it, and that's exactly what I was doing, then it is something like 'oh my god.' So what I realized was, I'm living in a very stupid world, a very frustrated world, a very twisted world. And the older I got, you know, I said, get away from people because it is, you know, not great pleasure to encounter negativity. But I realized how quickly I had to separate that what makes Peter Berlin 'Peter Berlin,' that people assumed certain things about me and I realized I had to separate me, Armin, from Peter. But I look back and I say, OK, that image I created there is a nice image. I did a good job, right?

You were emblematic of a period -- '70s, sex, and hedonism. Tell me about when things changed.

What surrounded me then changed in a very, very, very sad, tragic manner because of AIDS. So all my friends died in that era and that made me change. Not so much what I did, but sort of slowly I realized that the world around me changed, the places where I used to have a good time changed. Now it's a whole different approach to sex. Now it's happening on the Internet. It started with phone sex and I never was into that. So it was a natural way where I said, OK, thank god that I lived. And was sexually sort of aware in the '60s '70s, and '80s. I had 30 years of great, great expression and great time. And then it just ended -- and now I'm thinking about all that.

Could you talk more about the change happening to cruising culture now that so much of it is done online or on apps?

Now I tell you, when I was cruising in the '60s and the '70s and '80s, there were tons, thousands of other people doing exactly the same. I only did it maybe a little bit more effectively. And I was standing out. I created something that was blatantly sexual. Wherever I went, to the parks, to the streets, to the everywhere, people were cruising and I saw all kinds of exciting people. Now it's over. I can't even believe I'm sitting with my friend Eric here in San Francisco in a cafÃ©, more or less every day we have lunch, and I look at the picture on the street and I just can't believe it. I say, what is happening?

But you're not totally against the Internet. You recently joined Facebook?

Yes, as of three weeks ago, but I still don't understand it sort of. But it's another phenomenon where I see where the world is going to. There's that illusion. I think now in the short time I already have nearly 3,000 friends. So the whole thing is the young people feel now, oh my god, you know, 'I'm connected', 'I belong.' And then they wake up one day and see there's nobody there.

It contrasts so much with the persona of Peter Berlin who was so physical -- very sensual.

The feeling, what I had as Peter Berlin, what I was always trying to get, was to find a partner and then to create a good time. I believe this is not happening to too many people now. To me it's the highest form of being. I took it to an extreme where I went so high and excited that I think, my god, if I could get a little higher, I would drop dead. And that is what the whole thing was, what I was striving for. And I succeeded many times. When I say many times, really many times.

Getting back to the exhibition why do you call it "Wanted"?

The way it actually came about is that I can say, "Oh, Peter Berlin is wanted." I used to get all these letters with people telling me, "I want you, I want you." And when I was running around as Peter, I realized how many people wanted me. So there is that part, but the way it came about also is when I went for my green card [in the '70s], I had to get my rap sheet and I saw sort on the other side of the police station, you know, I saw that picture. The profile. I said, "Oh my god, I think I look quite good on that!" And then when I went again, went in for something else, I asked that nice lady, "do you have that picture?" And she gave it to me and then we came up with that idea.

Are you looking forward to being in New York for the show?

I dread it if you really want to know the truth. There was even a time when there was talk about the exhibition a year or two years ago that I actually thought, Oh, I hope it doesn't happen. And that's terrible to say. There will be a lot of people there. And especially now the new friends, you know? From Facebook.