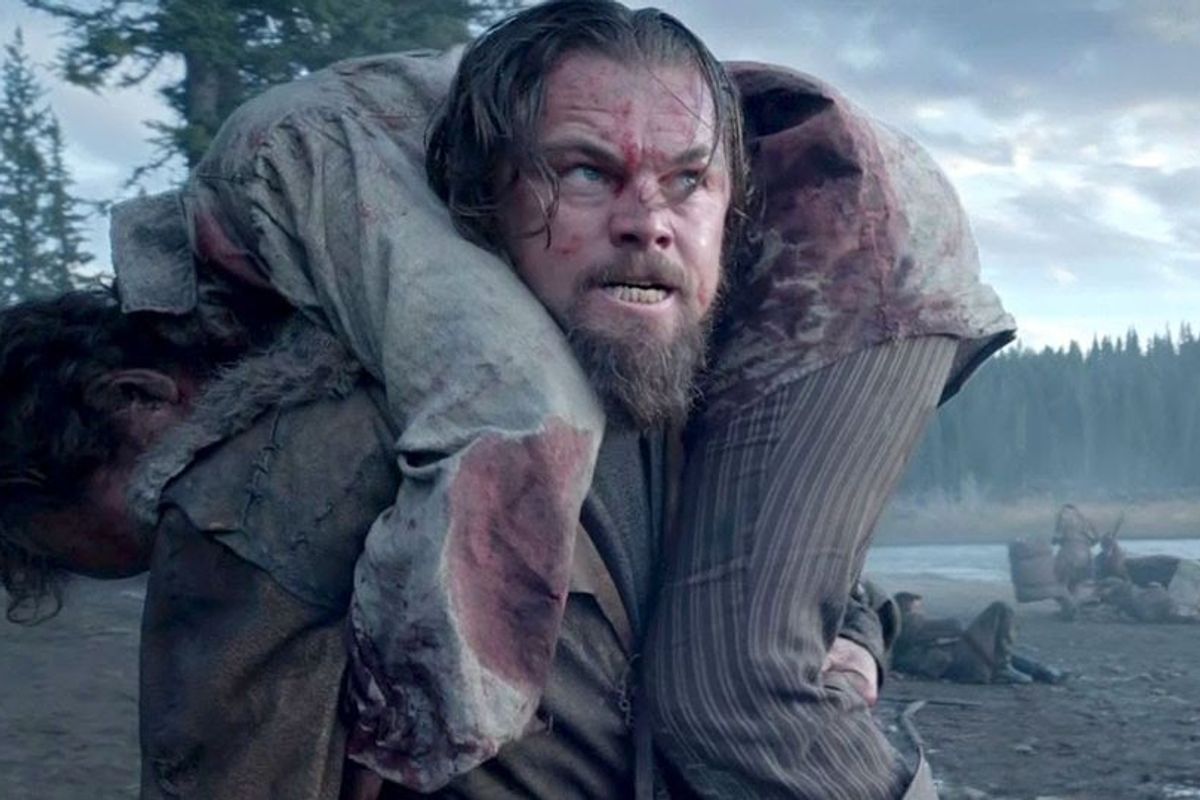 The plot centers around the 19th Western explorer/hunter Hugo Glass, who traversed a particularly brutal winter to seek vengeance on the hunting team who not only left him to die, but murdered his young son.

DiCaprio went all in for this one, because god dammit, he wants that OSCAR!

Directed by acclaimed director Alejandro G. Iñárritu, the film was just as arduous to make as the journey of the movie's central character; Leo discussed how his past roles, and real life misadventures have prepped him for this clandestine portrayal.

The real epicenter of the interview came when Leo discussed his brotastic near-death experiences:

My friends have named me the person they least want to do extreme adventures with, because I always seem to be very close to being part of a disaster. If a cat has nine lives, I think I've used a few. I mean, there was the shark incident …

A great white jumped into my cage when I was diving in South Africa. Half its body was in the cage, and it was snapping at me.

Then there was this Delta Airlines flight to Russia. I was in business class, and an engine blew up in front of my eyes. It was right after "Sully" Sullenberger landed in the Hudson. I was sitting there looking out at the wing, and the entire wing exploded in a fireball. I was the only one looking out at the moment this giant turbine exploded like a comet. It was crazy. They shut all the engines off for a couple of minutes, so you're just sitting there gliding with absolutely no sound, and nobody in the plane was saying anything. It was a surreal experience. They started the engines back up, and we did an emergency landing at JFK.

The other one was the skydiving incident. It was a tandem dive. We pulled the first chute. That was knotted up. The gentleman I was with cut it free. We did another free fall for like another 5, 10 seconds. I didn't even think about the extra chute, so I thought we were just plummeting to our death.

While these are pretty harrowing anecdotes, few know about the OTHER seven times Mr. DiCaprio dodged death's scythe; I'll tell you, Leo is not going anywhere until that golden, lissome statue is clasped by his coarse hands (let me dream).

Leo found his bliss while hanging his face out to soak in the sun in 2013, but few know that it NEARLY caused him to lose his head.

One Hollywood's most prevelant ECig enthusiasts, Leonardo's exhaled a particularly opaque vape cloud while speeding in a black Miata on a back road in the English countryside, causing him to nearly drive off the road, into a fissure opening up by the side of a moor, which ironically led to a spiritual hell dimension.

As an environmental activist, Leonardo has always been a proponent of Citibike in New York City; to show his support for the Eco-friendly vessel, he staged the first ever transatlantic Citibike crossing in 2013, from New York to London. Unfortunately .1 miles into the Long Island Sound, DiCaprio sank 12 feet before releasing that he was no longer pedaling forward.

4. Suffocating in a pile of models

-On the last night of 2014's Art Basel festival in Miami, Florida, DiCaprio reportedly "went home" from the club with a staggering 20 models, following the split from his ex, model Toni Garr. Tragically, Leo grossly underestimated the task at hand, and nearly suffocated after drowning in the fleshy pile at his penthouse.

Leo didn't necessarily have any brush with mortality at 2014's Coachella, per se, but *I* almost died after footage of his dancing came in--very "dad watching Bruce Springsteen cover band on a pier at dusk in Atlantic City."

Never underestimate the constrictive power of a swan's neck.

1. The first time he woke up to Jonah Hill standing over him and breathing heavily