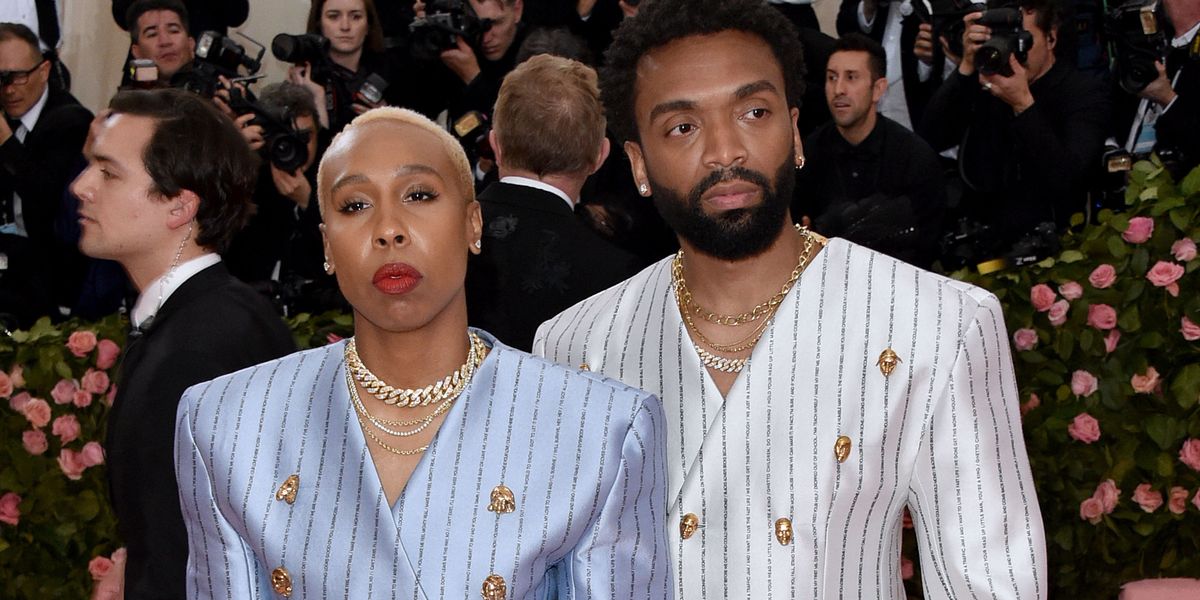 Last year, Lena Waithe stunned everyone by arriving to the Catholic-themed Met Gala in a rainbow cape. This year, she's decided to use the red carpet to make yet another political statement in response to the event's theme.

In true Waithe fashion, she decided to show up in an incredible, blue-purple pinstripe suit with the phrase "Black Drag Queens Invented Camp" written on the back — a true statement if we've ever heard one. Not only that, but if you zoom in, you can see that the stripes are made up of lyrics from Diana Ross' "I'm Coming Out" and Gloria Gaynor's "I Will Survive," per writer Evan Ross Katz's tweet. Joining Waithe on the red carpet was Pyer Moss' Kerby Jean-Raymond (who designed the outfits), who accompanied her in a similar suit, which said, "Fix your credit. Pool money. Buy back the block."

Lena Waithe is wearing a suit that says “Black drag queens invented camp” on the back. #MetGala pic.twitter.com/KcRDE2J9r3

Lena Waithe rocks a custom “BLACK DRAG QUEENS INVENTED CAMP” Pyer Moss tuxedo to the #MetGala. Zoom in to see the “pinstripes,” which are stitched with the lyrics of Diana Ross’s “I’m Coming Out, Gloria Gaynor’s “I Will Survive,” and more. pic.twitter.com/RsaltEVM1m

Lena Waithe In Pyer Moss with Kerby Jean-Raymond with the message 🔥 #MetGala pic.twitter.com/5mYduC5uCq

“Fix your credit. Pool money. Buy back the block.” Is what the back of that gentleman’s tux says😌 https://t.co/mF8wwFQBCc

Lena Waithe giving us a history lesson, and looking damn good doing so 😍