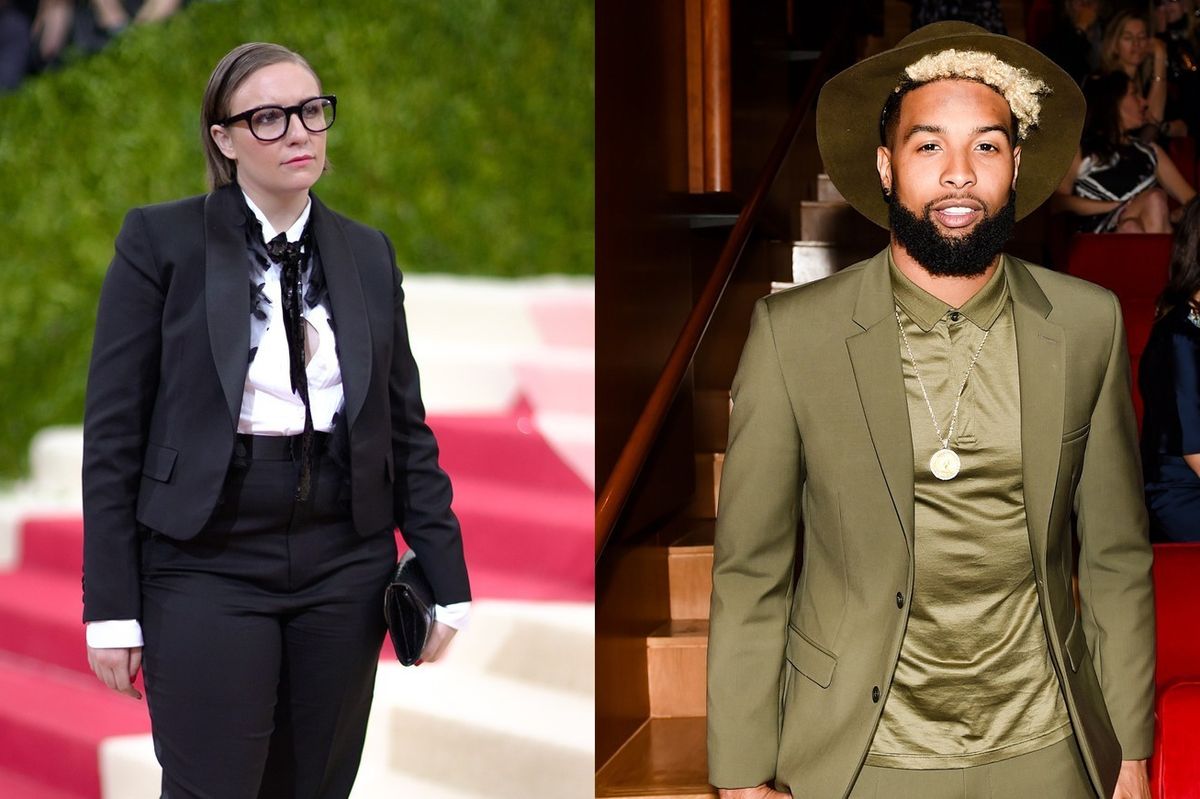 Lena Dunham interviewed Amy Schumer for her weekly Lenny Letter, and in the midst of operatic declarations of adoration and mutual respect ("I would fellate the whole cast of Duck Dynasty if I knew it meant keeping Amy safe, and I know she'd do the same for me"), the topic of the Met Gala came up. Seemingly apropos of nothing, Lena ripped her Met Gala tablemate, NY Giants wide receiver Odell Beckham Jr., for ignoring her at the event because she was wearing a tuxedo...

I was sitting next to Odell Beckham Jr., and it was so amazing because it was like he looked at me and he determined I was not the shape of a woman by his standards. He was like, "That's a marshmallow. That's a child. That's a dog." It wasn't mean — he just seemed confused.

The vibe was very much like, "Do I want to fuck it? Is it wearing a … yep, it's wearing a tuxedo. I'm going to go back to my cell phone." It was like we were forced to be together, and he literally was scrolling Instagram rather than have to look at a woman in a bow tie. I was like, "This should be called the Metropolitan Museum of Getting Rejected by Athletes."

Oh. The interview was released yesterday afternoon, and the social media backlash was swift and unequivocal. The overwhelming sentiment was that Dunham's sense of entitlement to the desire of Beckham Jr., a black man, was incredibly arrogant, and represents some of the most insidious qualities of "white feminism"...

When reading #lenadunham's words, please recall that at one point it was totally possible for WW to get a black man lynched for even less
— Siyanda Mohutsiwa (@Siyanda Mohutsiwa)1472852492.0

After she became a trending topic on Twitter, Dunham backpedaled on her previous statements, claiming that she was poking fun at her own insecurities rather than trying to insult OBJ.

My story about him was clearly (to me) about my own insecurities as an average-bodied woman at a table of supermodels & athletes.
— Lena Dunham (@Lena Dunham)1472853992.0

It's not an assumption about who he is or an expectation of sexual attention. It's my sense of humor, which has kept me alive for 30 years.
— Lena Dunham (@Lena Dunham)1472854035.0

Apparently, the Twitter furor led to an off-air conversation between Lena, Amy Schumer and Xavier Burgin, a writer, director and popular Twitter personality, who had many thoughtful things to say about the incident on his own feed...

Thank you so much to @xlnb for taking time to share his wisdom on the issues blowing up my twitter. His generosity is radical & astounding.
— Lena Dunham (@Lena Dunham)1472920001.0

Which in turn provoked a separate conversation about "misogynoir"...

Black men, I invite you to be attentive to the ways you get heard & affirmed for things black women get ignored or silenced for saying.
— wikipedia brown (@wikipedia brown)1472921991.0

Black women have critiqued Dunham for years. But when @XLNB does it, she suddenly wants to listen. This is how race & gender intersect.
— wikipedia brown (@wikipedia brown)1472922083.0

And @XLNB, this is not in any way a knock on you fam. I appreciate and support you today and every day. But her reaction is notable.
— wikipedia brown (@wikipedia brown)1472922119.0

The conversation on Twitter and with Burgin seemed to have gotten through to Dunham, who just posted this apology on her Instagram...

Sometimes it takes a village to get people to acknowledge their privilege.