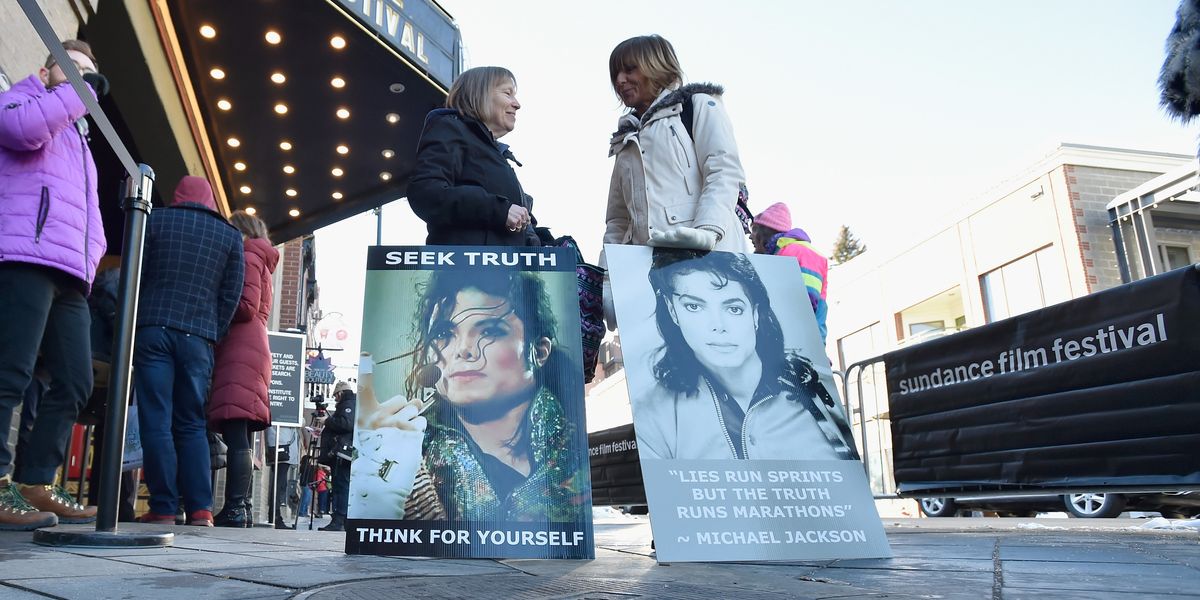 One of the films to get a standing ovation at this year's Sundance Film Festival was Leaving Neverland, a documentary film that focuses on pop legend Michael Jackson's accusers, Wade Robson and James Safechuck. The two came forward as adults, after Jackson's death in 2009, claiming they'd been molested by the 'King of Pop.' And after they showed what they had to say on the big screen on Friday morning, the two took the Egyptian Theater stage in Park City, Utah and received applause.

"We can't change what happened to us. And we can't do anything about Michael," Robson said in a post-showing Q&A with the audience. But their hope is to raise the awareness of parents and guardians, and to make other survivors feel "less isolated." The two, who were approached by director Dan Reed, also said that they were not paid to participate in the film.

A deeply emotional Wade Robson and James Safechuck receive a standing ovation after the screening of LEAVING NEVERLAND. There will be a lot to say later, but I can say this: This is a thorough, devastating, deeply credible piece of filmmaking. pic.twitter.com/U6UL2Lmnaz

Leaving Neverland is gutting, heartbreaking, harrowing. Less an adjudication of Michael Jackson’s cultural legacy than a blow-by-blow of the effects of his crimes. Holy fuck.

Safechuck says he had a mock wedding ceremony with Jackson, and still has the gold band with a row of diamonds on it that served as his wedding ring. Jackson knew he loved jewelry, so Safechuck felt "something I enjoyed was used against me."

According to CBS News, the film is four hours long, and will be premiering in two parts on Britain's Channel 4 and HBO this spring. It shows how Robson and Safechuck's lives as boys intersected with Michael Jackson's in the 80s and early 90s — the height of the King of Pop's fame. It also looks into the two men's adult lives and how "the trauma of what happened in their youth started to emerge in serious ways."

The film also interviews Robson and Safechuck's family members, and includes sound bites from Jackson in the form of voicemail he had left for Robson, and a recording of Safechuck's "interview" on the singer's private plane. Other evidence shown on the film includes faxes Robson had received from his supposed abuser.

Leaving Neverland was denounced by Michael Jackson's estate in a statement, calling it "the kind of tabloid character assassination Michael Jackson endured in life, and now in death." The statement continued, "The film takes uncorroborated allegations that supposedly happened 20 years ago and treats them as fact." The estate also accused the Sundance entry of ignoring other testimonies that say Jackson never harmed any children.

Note that in 2005, Jackson got acquitted for another molestation charge involving another young man. Robson participated at the trial, and gave a testimony at 23 years old saying that he had slept in Jackson's room many times, but that Jackson had never molested him. CBS reports that Safechuck made the same claims as a boy. Everything changed in 2013, when Robson — who is now a choreographer who has worked with the likes of Britney Spears — filed for a lawsuit because he's faced the truth that he was, indeed, sexually abused by Michael Jackson.

Sundance Film Festival officials took extra precautions on Friday because of the controversy surrounding the film. The Utah police were called to prepare, and remain on stand by, in case of possible protests that would get out of hand. There ended up being a small group that gathered, but thankfully there was no violence at the scene.

If you plan on watching Leaving Neverland when it premieres on HBO and Britain's Channel 4, please be warned for your own mental health and safety that the interviews get pretty graphic, and that Safechuck and Robson go into detail about the abuse.