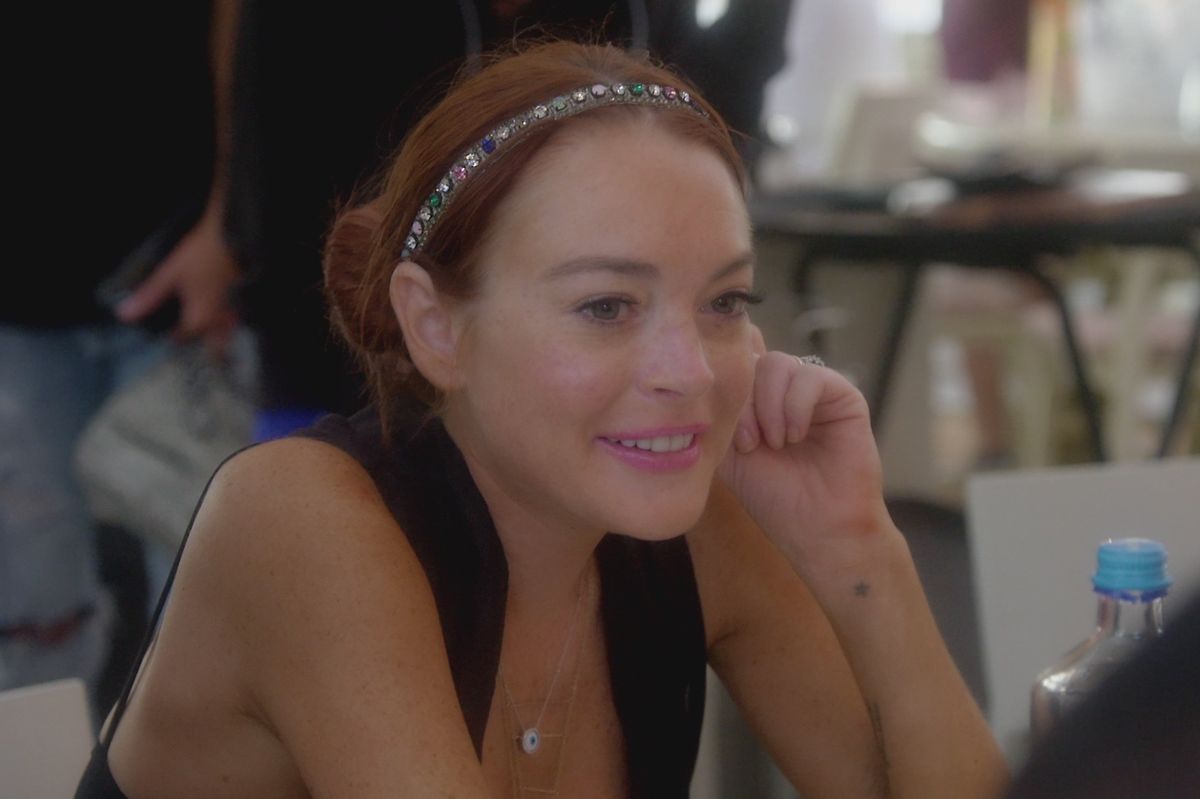 Miley Cyrus posted a video of herself singing along to Lindsay Lohan's "Rumors" to Instagram yesterday. This show's impact! Sadly, episode four doesn't feature as many vintage Lohan hits as I'd like. Lindsay is, as usual, barely in it. On the bright side, Brent causes way less drama, and we finally (finally) get to see the hosts do something other than earn money for other people.

We open with Lindsay, who is lying on the beach and receiving some kind of electro-shock massage therapy? It isn't explained. She says she's starting to have more faith in the hosts, which is nice. Then she gets a manicure. It's good to be the boss.

Now it's the morning meeting. Panos warns the hosts that this will be a busy day, which he says every time. Speaking to the camera, he starts going off about Jonitta, who he always has many issues with. She's a party girl, and he hates that, but he "sees a businesswoman inside of her" and knows she could be "something spectacular." Flicking back to the meeting, we learn that A BIG CLIENT is coming. Like always! It's Big Shaq — a.k.a. British comedian Michael Dapaah of viral "Man's Not Hot" fame. Who will get to take care of his cabana? Billy.

Panos has also decided that Lohan's Beach Club needs to have a "signature drink." It's essential, suddenly! Everyone has to come up with some ideas. Cut to all the hosts crowding around the bar, experimenting with different combinations. Billy comes up with something that everyone likes, and Gabi makes a competing drink.

Panos arrives, ready to judge. He takes a sip of Billy's drink. "Who made this?" he asks. Gabi cuts in. "I made this one, it's better," she says. "It has more champagne." But Panos likes Billy's. Jonitta, who hates Gabi (remember the awkward moment in episode one where Gabi claimed to be the only black woman?), high fives Billy.

Big Shaq arrives, ready for his VIP treatment. We see Billy attending to his every need as Panos watches and smiles, in his uniquely terrifying way.

Lindsay tells the camera how important Big Shaq is to her and the beach club. She looks gorgeous and fresh faced in this shot. I guess those electric shocks worked! Now Big Shaq, Lindsay, and Panos are all sitting and drinking together. Lindsay tells Shaq the sad but confusing story about the genesis of Lohan's Beach Club, which is: her ex hit her on this beach three years ago, and she told herself that instead of retaliating, she'd own the beach one day.

Shaq makes the appropriate facial expression for this scenario. Then they start taking selfies.

Panos is back on camera, wearing a loud shirt. He is proud of the hosts, who have all improved a lot. That's nice. They're getting a day off tomorrow, he says. This is framed, disturbingly, as a special treat.

Jonitta is lying in bed, Facetiming someone back home. "I'm not one to gossip," she says to the screen. "But these bitches are crazy." She singles out Gabi as "thirsty and desperate for attention." Cut to a shot of Gabi looking lost and sad.

Back to the Mike and Jules flirtationship. Mike is on camera talking about how they're not exclusive, and if Jules were to hook up with someone else, all he asks is that he can watch. Ew.

Alex, the new host who has a past with Mike, isn't buying any of this.

On camera, Alex reflects on how he and Mike hooked up that one time.

To cap off their day off, the hosts are hitting the club! Jonitta is meeting up with a date — some dude we haven't seen before. Gabi immediately annoys her by kissing him on the cheek as a greeting. Meanwhile, Alex and Mike are touching and flirting. Surprise! They share a kiss. But Mike is NOT out to ruin Alex's relationship back home, he says.

The hosts return home, and Jonitta decides to lay into Gabi for the cheek kiss. What she did is "not classy." "Let's not be so thirsty," she instructs. Gabi gives the fair excuse that Jonitta's date greeted her, so she greeted him back. They'd met before. She didn't dance with him or anything.

Jonitta overturns a chair. She's so mad. Gabi gives Jonitta a light tap on the leg. "Do it again," dares Jonitta. She does. Aaaand catfight! Jonitta slaps her real hard in the face. During this altercation she also briefly dons an ancient Greek helmet.

Aristotle, Mike, Alex, Sara, and May all just stand by watching with the usual blank looks on their faces, so an MTV camera person is forced to step in and break up the fight.

Jules, sweet stupid Jules, is on camera now. "It's silly to fight over a boy," she says. "We're here to work."

We see that Gabi is sitting outside the villa by herself in the dark, reflecting on the situation. "I was saying hi to somebody who I've already met before. I thought I was being polite," she says. Meanwhile a bunch of the hosts are now lying on Jonitta's bed, bitching about Gabi. Distraught that no one has taken her side, Gabi packs her unicorn backpack and heads to a hotel for the night.

Speaking of, though. Panos is watching a video of Gabi and Jonitta's fight on his phone. He was apparently "up all night" because of "troubles with the business," so was already in a bad mood. He says it's "unacceptable" behavior. He's worried that Jonitta will slap a guest at the club next time she's mad. Yep, he found a way to make this about business! He arrives at the villa, ready for a serious meeting.

"So where do I start?" asks Jonitta. "With the fact that she's a thirsty little girl, or that she's irrational and doesn't know how to have an adult conversation?" Wow. Classic this show. The villains always take everything about three steps too far.

A fun detail: Jonitta is wearing a white t-shirt that says "SORRY" on the front side and "NOT SORRY" on the back. Also, everyone is looking super, super hungover.

"Are you kidding me? Who do you think you are?" asks Panos. "Me and Lindsay don't condone violence," he says. "Never in our lives!" Jonitta is unapologetic, which makes Panos even more mad.

Panos heads off to speak with Lindsay and figure all this out.

Jonitta and Sara are now sitting by the pool. "I came here to be a sponge and learn from Lindsay and Panos," Jonitta says. Learn what? How to have friends who are moderately famous DJs? How to wear loud shirts? "But I'm not going to apologize. They can send me home before I apologize."

"You need to think about what's important here," says Sara. Jonitta starts crying and says she needs to work on herself. Sara says her brother has bad anger issues and she gets it. "This is a privilege that we're here, and we need to be grateful for it, let's get our shit together," she says. Always with this gratefulness for the many "opportunities" that come with working for a former actress slash singer and her fishy business partner at their Mykonos bar and restaurant venture.

Before the episode ends, we get Lindsay on camera. "Jonitta can't hit someone," she says. "It's unacceptable." Uh oh. Is someone about to be sent home?