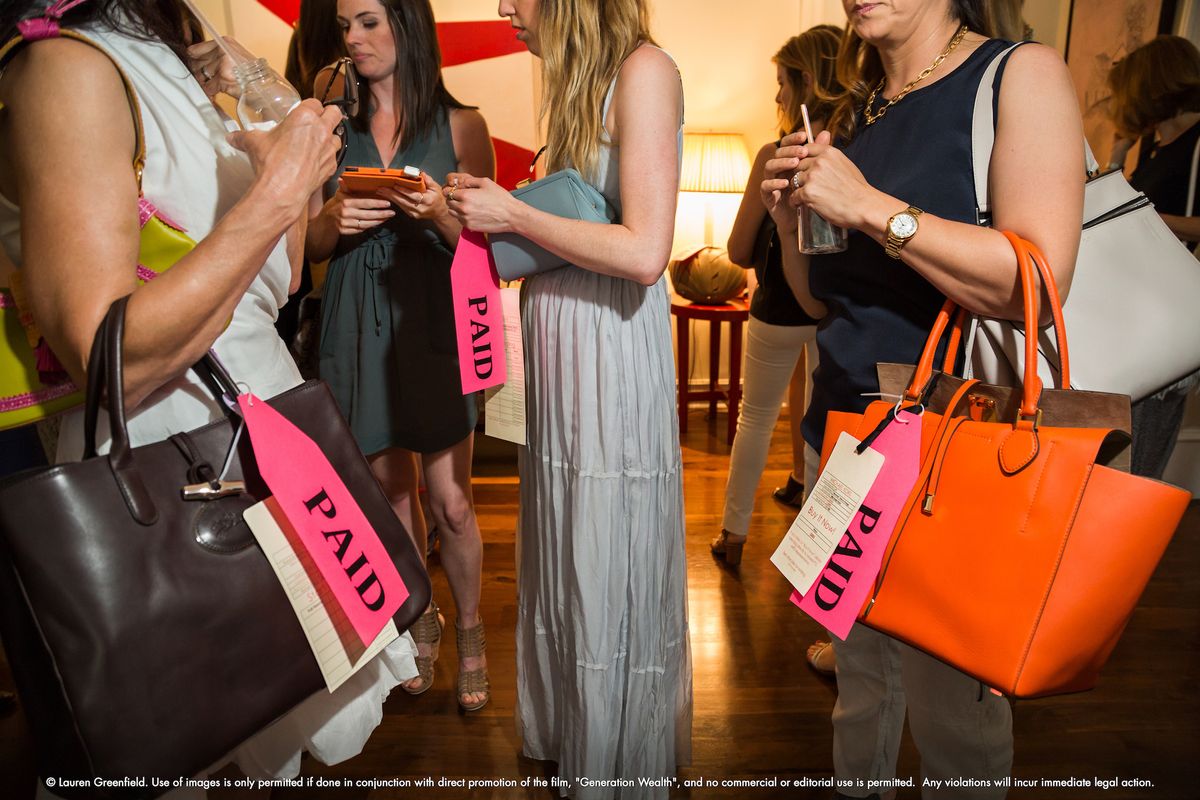 The doc shows what happens when the American Dream curdles.

One of the most unsettling moments in Lauren Greenfield's new documentary Generation Wealth, out today, shows an old TV news clip from the early '90s. The newscaster, who is doing a segment on a photo series Greenfield shot featuring wealthy teens living in LA (think: pics of high schoolers driving expensive cars, a boy dancing with a scantily-clad go-go dancer at his Bar Mitzvah), speaks ruefully about the decline of America's traditional morals and values and the decadence and hedonism he thinks has replaced them. It's hard to watch without wanting to yell at the TV screen, "You think the early '90s was the height of decadence? If only you could see what would happen in 30 years!"

Throughout Greenfield's documentary, which accompanies an earlier photo book and exhibit of the same name, we're treated to an anthropological look at how the attainment of wealth -- and interconnected ideas like youth, sex and beauty -- has steadily become a bigger and bigger obsession not only for Americans but, increasingly, more and more citizens living around the globe. Greenfield, who, in addition to her work as a photographer, is perhaps best known for her thought-provoking 2012 documentary The Queen of Versailles, first became interested in exploring these themes thanks, in part, to her own upbringing in LA and the well-to-do friends and classmates she met while attending a private school. She weaves her own story into the documentary in the midst of introducing us to distinctive characters whose lives have been impacted by their own quest for fame, fortune or the perfect body, examining the ways in which her own values and obsessions might not be so different from those of her subjects after all. "You see in the film how I'm kind of a crazy workaholic," Greenfield says. While others might fixate on consumption or appearance, Greenfield realizes that her own obsession is her work.

She studied visual anthropology at Harvard and Greenfield brings this perspective to her photography and filmmaking, probing her subjects about the motivations, insecurities, and passions that lead one wealthy bon vivant to amass enormous wealth while all the while committing serious financial crimes or another woman to travel to Brazil to get extensive plastic surgery. She also interviews economists and academics in search of answers about how our society got to where we are. For Greenfield's part, her hypothesis is that over the past several decades, beginning in the 1980s, "the American Dream rapidly shifted from being about hard work and discretion and discipline and making a difference in society...to a culture that valued bling and narcissism and celebrity."

Greenfield explains how forces like entertainment, youth culture and conspicuous consumption that had been steadily increasing throughout the post-WWII era reached an inflection point in Reagan-era America and, as anyone with a smart phone can sense, have only gotten magnified with the explosion of the Internet, social media and reality television. "We used to compare ourselves to our neighbors and people that we knew," Greenfield says. "What's changed is that now we compare ourselves to the people we see on TV and on social media. That leads to a completely unrealistic aspiration." She adds, "And the backdrop against all of this is that we've never had so much inequality and we've never had such little social mobility." Greenfield's documentary explores the ways in which people attempt to fill a void made by this immobility by "faking it 'til you make it" -- if you don't actually have wealth, power and status, you might as well try to acquire the trappings of it and pretend that you do. For some this means exorbitant spending on homes, clothing and handbags (there's a memorable scene of a luxury handbag party, whose clip PAPER is excited to exclusively share below) while for others it's about deriving their sense of self-worth through their appearance, sexuality or careers.

Greenfield's interview subjects include a porn star named Kacey Jordan, who became briefly infamous for her fling with Charlie Sheen during his #winning phase; a middle aged woman who works as a nightclub hostess in Las Vegas and brings her twentysomething adult son around with her on nights out with wealthy VIP clients; a crew of Angelenos in their late 30s who Greenfield has known since they were privileged, hard partying teens in the early '90s; a young girl named Eden who competes in child beauty pageants and more. Like the LA teens, many of these subjects are people Greenfield has known for years and the documentary almost serves as a longitudinal study looking at what happens when we devote our lives to consumption and attainment, whether of products, social status, beauty or youth. While many of Greenfield's subjects have led lives that are, at times, frankly pretty harrowing, a common theme is that many of them reach a greater insight (sometimes after hitting rock bottom) that leads them to reassess their priorities and their values.

"I feel like the end of the film is quite optimistic," Greenfield says. "I kind of surprised myself with my own optimism because when I did the [Generation Wealth] book, it ended very darkly. But I took a lot of hope from the subjects' stories and the insights they found. And also the next generation -- [one of the documentary's subjects] talks about our children teaching us and how you can heal from your children." She continues, "Children and hopefully Millennials who see how this culture is bringing us to the brink can do something different."

Check out an exclusive clip from Generation Wealth above.

Generation Wealth is in theaters now.