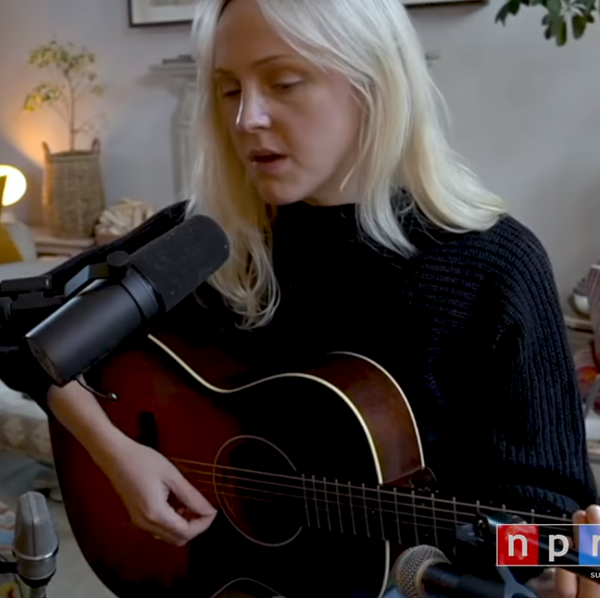 Equipped with one acoustic guitar, several microphones and her gravelly voice, Laura Marling's folky tunes feel timeless and comforting as ever, especially in a cozy setting like NPR's "Tiny Desk" concert series.

But rather than strumming in front of a small desk, Marling's "Tiny Desk" set was performed from her home in London. Her backdrop is what one might picture when listening to her brand of introspective folk: lots of plants, a generous amount of natural light. The little things!

In the stripped-down session shared today, Marling chooses three tracks off Song For Our Daughter, the record that pays homage to the work of Maya Angelou, released early on April 10 due to the coronavirus.

Marling's first live rendition is of "Held Down," with poignant lyrics that tell the story of being "lost in a crowd." Her second song is the more upbeat "Strange Girl," which details how women's emotions can be channeled into creating art. She wraps the set with the title track from her seventh album, complete with a powerful story about womanhood, how misleading many lessons from patriarchal society can be and how strong young girls have to be at early ages: "Though they may want you to take off your clothes," Marling sings in the first verse, and later, "Taking advice from some old balding bore/ You'll ask yourself, 'Did I want this at all?'" The song echoes Angelou's stories of surviving sexual assault and addressing a future daughter with its powerful lyrics.

The English musician's first Tiny Desk performance was back in 2012. At the time, she performed two haunting songs from her critically-acclaimed third album, A Creature I Don't Know and premiered the then-new single, "Once."

Should you need more comfort, scroll through Marling's Instagram for breezy guitar tutorials of classic folk songs. As she sings on her album, "You'll get your way through it somehow."