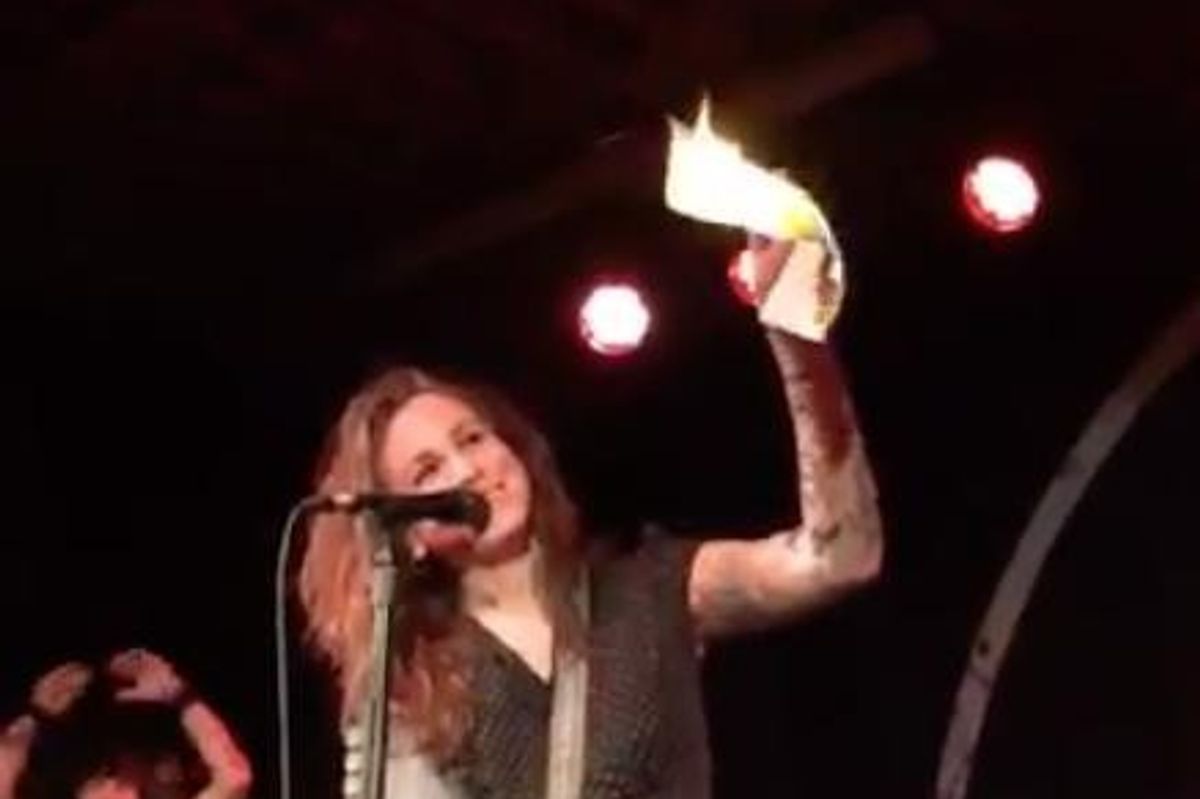 Transgender front woman of punk band Against Me!, Laura Jane Grace, shared a moving essay on her band's decision to play in Durham, North Carolina 2 weeks ago, despite the state's woefully anti-trans and anti-gay HB2 bill.

Working with Vulture's senior editor Jesse Singal, Laura reveals how important it was for her and Against Me! fans that they play, even with the trend of notable musicians boycotting scheduled shows in the southern state.

With all her courage, Laura admits some fear for the physical safety of herself, her bandmates and their fans at the show, with so much heated, irrational bigotry swelling around.

Things did feel different before the show, though. There was a charge in the air. I definitely may have been having panic attacks every half-hour. At times, my mind was even jumping to the fear of ' What if a crazy comes to the show and tries to kill me? What if someone jumps up onstage and does something? What if someone targets the show? What if you're endangering people?' Those thoughts were real to me, and really, really terrifying. I was just hoping that everyone would be safe and nothing would happen because of the show.

The rocker also provided us with insight into her struggles with gender dysphoria when she was still a man, articulating how stealthy she was at disguising lyrical content about it throughout the band's discography.

I use songwriting as an outlet, a way to deal and to cope. It was gender dysphoria that led me to punk rock, so naturally I sometimes found myself writing about the feelings generated by what I was experiencing. At first I was scared of anyone finding out, so I'd be really crafty — or at least I thought I was being crafty — about disguising what I was talking about. We put out an EP after our first full-length album called "The Disco Before the Breakdown," and the lyrics to the title track — "I know they're gonna laugh at us/if they see us out together holding hands like this" — that's just a metaphor for gender identity. Or the lines on "Tonight We're Gonna Give It 35%": "Can you live with what you know/About yourself/When you're all alone/Behind closed doors/The things we never said/But we always knew were right there ... "

Finally, Laura discusses her triumphant act of setting her male birth certificate on fire before the show...

...proclaiming, "Bye, gender!" and exposing the absurdity of the hateful bill.

Before the show I set my birth certificate on fire in front of everyone. That was to emphasize the illogical nature of current laws. It's one thing to say, “You have to use the bathroom that corresponds to your identification." If that's the case, I should be able to go, “Okay, well, tell me how I can change my identification." But if you're then telling me, “There's no way you can change your identification," that's where it's fucked up — you're putting people in an unwinnable situation. In order to start hormone replacement therapy, which I've been on for about four years, I had to undergo months of intense psychotherapy and have a licensed therapist write a letter saying I'm not insane. That should trump a birth certificate. That should be proof enough that this is real.