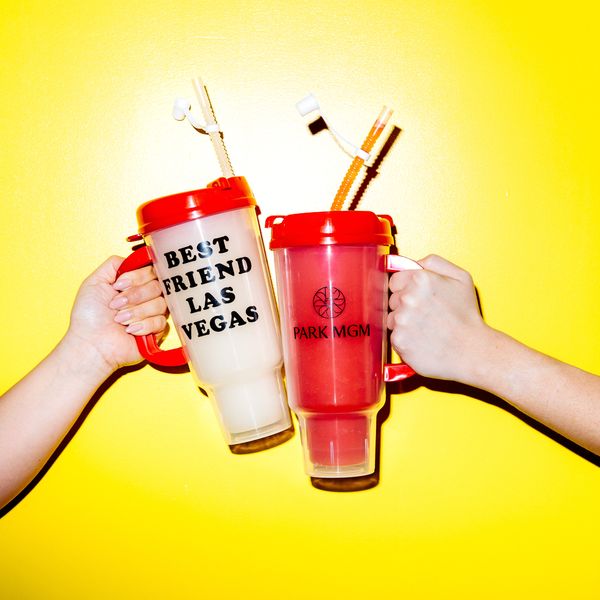 Las Vegas is known for its culture of unruly fun and games, but while having a ball or seeing one of the town's many shows and tourist attractions, don't forget to get in a good meal or a nice cocktail. PAPER recently visited some of the coolest, new spots on and off the Strip. Here are our top recommendations for a dining experience as unforgettable as the town itself remains, depending on what you're looking for. But trust: Vegas has a little something for everyone.

If You're Looking For Cool...

Best Friend, created by Korean-American chef Roy Choi, is every bit as socially engaging as its name suggests. First of all, there's the extensive, beautifully curated Korean menu with mid-range prices per dish, ranging from various bibimbaps to Western-style entrées like chilli-cheese spaghetti. Coming with a crew? The dishes can be enjoyed on their own or family-style, depending on how hungry you are. Then, there's the space's eye for design, outfitted with dim neon lights, palm-tree motifs, and big booths in the back, and old-school diner counters and sports-bar TV sets up front.

The menu is a high-school scrapbook aesthetic full of grainy yearbook photos of the outcasts you either were or admired from afar. It sets into motion a sense of nostalgia that comes along with eating your favorite comfort food. Add that to the fact that the staff is outfitted in track suits, bucket hats, and low-top Vans, and suddenly, we're hanging out with the coolest kids in the skate park. Dim lighting and an ace hip-hop-led soundtrack fill the space, too, creating an atmosphere perfect for late evening hangs between whatever crazy exploits you're getting into on the Strip.

For extra cool: Sample the largest gin selection in Vegas, at the Park MGM's Juniper Cocktail Lounge. The establishment prides itself on its serious variety of spirits while making sure your spirits are light and relaxed, complete with DJ booths and bottle service. Because Vegas, baby!

If You're Looking For Luxury...

Sara's, tucked in a corner away from the Palms Casino's Mabel's BBQ, is so luxe that you get escorted to a private dining area hidden from prying eyes upon arrival. It's the perfect place if you're Beyoncé and want to dine incognito with a separate entrance from the general public. It's also the perfect place if you're feeling Erika Jayne XXPEN$IVE, and want to wear your Sunday best to eat a literal tower of shellfish, escargot, tuna tartare, and impeccably flavored Dover sole, which is filleted before your eyes by the world-class cooks (among fellow one-percenters, if that sort of thing is your fantasy). And why wouldn't it be? Welcome to the supper club of all supper clubs.

Vegas practically invented worldly American fantasy, taken to the max. Nevertheless, Sara's low mood lighting and friendly, bowtie-clad staff, who are also experts at discretion and also selling the hell out of delicious dishes above $50 that you must try, is like every time those women on The Hills cried mascara-filled tears and stared blankly into space. But those women were rich and on national TV, so. In other words, spend some money here and leave feeling somehow wealthier, fuller, and also famous.

For extra luxury: Looking for a continued black-tie experience? Have a refined cocktail or nightcap amid live entertainment at the chic Mr. Coco, tucked away in the Fantasy Tower of the Palms Casino.

If You're Looking For Fantasy...

If you love a solid bagel and fish spread experience, chances are you're already familiar with Sadelle's — an upscale Jewish bakery that is also a beloved New York City brunch institution. Known also for its charming atmosphere and decor, Sadelle's has expanded to the gold-bedecked halls of Las Vegas' classic five-star Bellagio hotel, taking its signature fish towers, fried chicken, sticky buns, and tall, decadent cakes with it. The brunch destination, which also incorporates a range of Korean fusion staples into its menu, underwent a recent facelift that included Italian marble tiling, a crisp, periwinkle blue paint job reminiscent of springtime desert sky, a curious chocolate "O" sculpture, curved walls creating lots of big, bright open space — it's something close to heaven.

With so much airiness and a wait staff outfitted to resemble chic French schoolmarms, you feel like you're somewhere grand that may or may not exist. I mean, we just mentioned a host of influences combining New York elegance, Vegas razzle-dazzle, Italian modernism, and French classicism, so clearly we're not talking about a place here on earth. And the food is just as otherwordly delicious: try an immensely satisfying open-faced grapefruit encrusted with brown sugar and honey, any of their soft, buttery assorted pastries, and basically anything else on the menu, and prepare to be transported to a realm where springtime and fantastic food are forever.

For extra fantasy: Buy literally any/every Lady Gaga residency ticket available (not food, but it will nourish your soul).

If You're Looking For Comfort...

Are you the kind of messy barbecue eater, who, come every national American holiday, decides your clothes are best used as sauce napkins, but you don't seem to mind? Mabel's BBQ, inside Palms Casino, is the stuff you're made of, then. From its roomy booths ideal for resting your boots on for maximum digging in to a soundtrack that successfully merges Top 40 hits with a little bit of country and rock 'n' roll, everything about Mabel's will feel instantly familiar, evocative of grill dates with friends and, like, niche sporting events.

But with a worldlier twist: coming from Cleveland tradition, the barbecue is indebted both to Mabel's hometown and to the Greek and Sicilian heritage of chef Michael Symon (who also created the aforementioned Sara's). For example, the meats, from wings to half-pound brisket to racks of ribs that fall off the bone, are smoked to succulence over local fruitwood and incorporate Eastern European spices. Other inventions include the barbecue sauce, which has a hint ballpark mustard mixed in. One's mouth can't help but water, especially when encouraged to "eat more meat," by a giant neon sign overlooking the bar suggesting you do as much. But, in the event you do need some water for what will undoubtedly be many cravings, reach for a signature cocktail instead, which includes quirky options ranging from French Toast Manhattans to the passionfruit-infused Dirty Beachcomber.

For extra comfort: If you're feeling fully loaded but find yourself craving honest-to-goodness breakfast food in an open-format cafe where your options for eggs, carbs, and meat are plentiful, Lucky Penny is the Palms Casino Resort is your jam.

If You're Looking For Tradition...

Welcome to Factory Kitchen, a no holds barred, trattoria-style Italian restaurant with an approachable lunch, dinner, and dessert menu. It's the end result of a familial friendship between restaurateur Matteo Ferdinandi and chef Angelo Auriana, who are both determined to bring their Italian roots and love of hospitality to the kitchen table. The Las Vegas offshoot, located in the heart of the labyrinthine Venetian hotel definitely maintains the spirit of the original. The seating is spacious, comfortable seating customizable enough to accommodate all parties, whether large and rowdy or small and intimate.

Photo courtesy of The Venetian Resort

Servers are knowledgeable and ready to tell you all about the range of flavorful appetizers, from steamed clams to Tuscan salads with ricotta and watermelon radish, and filling pasta dishes, including gnocchi and cappellacci. Not to mention, you can wash it all down with the Kitchen's extensive seasonal wine list, and an assortment of negronis to choose from. It's all tailored to account for varying taste levels, whether you're into the land or sea, or homemade style eating, and that's the only thing "factory," about this place, if you don't include the gorgeous execution of the food itself. Further, everything is made from fresh, seasonal, and locally sourced ingredients, providing for a dining experience that will feel just like the comfort of good old-fashioned home cooking.